§ 17. Phoenicia and Syria in antiquity (textbook)

§ 17. Phoenicia and Syria in antiquity

Already in ancient times to the eastern MediterraneanSea have settlement Phoenicians. The country they inhabited was calledPhoenicia. Now the place is ancient Phoenicia state Lebanon.

In Phoenicia was not large rivers and valleys with fertilesoils. Little was also room for fields and pastures. However, it was commongardening. Phoenicians growing grapes and olive trees. Since olives arevydavlyuvaly fragrant oil, wine made from grapes. Oil and wine Phoenicianstraded for wheat. Lebanese mountains famous pine and oakforests. Lebanon sent to Egypt and other countries.

The location was very convenient.Here converge the caravan and sea trade routes from Dvorichchia, Egypt, Greece andother countries. Over time Phoenician village turned into a rich tradingcity. In the north of the city was located, which the Greeks called Ref, in Phoenician Hebal,which translated meant the mountain. Most Greeks called Phoenician city Tyre, corresponds to the Phoenician Zur – rock. Tyre was on an island near the coast and was almostinaccessible for enemies. The third largest city was called Sidon, meaning cityfishing. Towns and villages located on the coastline. It wasconnected with the main occupation of the Phoenicians– sailing, fishing,trade.

Each Phoenician city had its own ruler - the king. Hewas dependent on the council of nobles and national assemblies. In Phoenicia was no unity.Phoenician people did not even own the name. Residents called each cityover his name. Phoenicians were called Greeks.

Since time immemorial, in Phoenician cities was developing craft.Far beyond the country's products were notorious Phoenician craftsmen: goldsmiths,founders, builders, weavers, woodcarvers and elephantine bones. InPhoenicia were made of various grades of glass: from dark and opaqueto transparent. With various decorations made of glass, bottles for spices thatvery appreciated.

Extremely evolved in Phoenicia making purplepaints, which are valued in the ancient world. Experienced diversdived to the bottom of the sea and risking their lives extracted from there precious purpleshell. With each drop of precious mollusk vydavlyuvaly liquid that gaveto dye clothes in different shades of purple. And sothoroughly that even during the wash cloth is washed.

Preservedstory of how the paint was discovered. Once Phoenician shepherd passnot herdfar from the coast.His dog rozhryz marine bivalves. When he returned to hismaster clock he had painted in magenta. By Shepherdthought the dog something poranyvsya, and onchavwipe a piece of wool imaginary blood but no wounds found. In returnhair has become a wonderful bright red color.

Phoenicians in ancient times were considered the best korablebudivelnykamy. From the cedar and oak mastersbuilt high-speed ships. 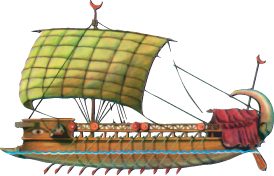 Phoenician cities were centers of trade in Front Asia.Famous sailors Phoenician merchants established contacts with variouscountries and peoples. They traded textiles from Egypt, wine from Sidon, With oil Tiru, With copperCyprus cedar from Lebanon Mountains, dried fish and Phoenician cities, livingcommodity - slaves of others.

When the Phoenician ship was gone in a foreign harbor, the townspeoplegreeted him with joy.

Phoenician merchants of old have earned notorietylyudoloviv. When their ship was in harbor, they are ploys to zamanyuvalypeople themselves. Then sold them into slavery in other countries. But if droppedconvenient time, and not shy to deal with robberies. Sometimes they landed on thebank and robbed defenseless village. People trapped by suddenly abducted.

Phoenician mariners ever been to one and themost foreign countries. There they have found their settlements - colony. Residentscolonies - colonists - Tied ties with the surroundingland and got the right products.

Colony - Here: the settlement of people who migrated from anothercountry. Do not be confused with another meaning of the word "colony" of the country seizedother country.

During XII-VI cent. BC on the coast andislands of the Mediterranean is gradually emerging Phoenician colony. Firstthey were Cyprus у North Africa and Iberianpeninsula and a little later in the far England (UK) andWest African coast.

The development of distant overseas lands rarely leadbefore placing them under Phoenician rule. Colonies of Phoenician citiestend to become independent of Phoenicia, only supported with her sisterties. The largest colony of Tyre in North Africa is Carthage.Over time he becomes rich and powerful chief town of the state. 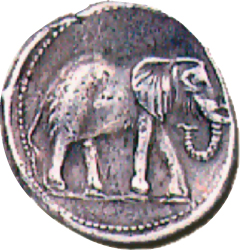 Phoenician merchants were brisk trade. Sales recordsshould have lead quickly. Kanji and cuneiform were too complex for that.The Phoenicians used the experience of the Egyptians and Babylonians, who were signs not onlyfor words but for some consonants. In II end thousand BCin Phoenicia invented the alphabet. He had 22 signs. Each character was responsiblesingle consonant sound and a letter. Loud sounds in writing propuskalysya.For example, the word "king" was recorded in letters SHR. Those who read it, had himselfguess the meaning that should read "sharru"("King"). Phoenicians wrote from right to left (we left). Lettersreminiscent of images of objects whose names begin with these letters. Alphabet waseasier and more comfortable familiar Withdrawalnopysu. Soit quickly spread among the peoples of the Middle East, and eventually othercountries.

5. History of Syria in II thousand BC

To the east and north of Phoenicia was located Syria. Localresidents were involved mainly nomadic cattle and intermediary trade.Only in some valleys, natural conditions promoted the development of agriculture. Bylevel of farm Syria inferior Phoenician cities.

Syria, like Phoenicia, for almost the entire history wasscattered in several small states that are constantly at enmity between themselves. Thiscontributed to the country's geographic fragmentation and lack of major rivers. Exceptaddition, from time immemorial been surrounded by powerful states Syria, which has always sought tocapture its rich trading cities and natural resources.

On the territory of Syria showing relatively little written sourcesbut they tell almost nothing about the social system of the country. Accordingscientists, the Syrian city population consisted of merchants, soldiers, freecongregation peasants, artisans and independent workers.

One of the largest cities in the middle of thousands II BCwas Uharyt, which lived 30-40 thousandresidents. The city had its own ruler, whose power was limited by the city council.City Council solved the internal affairs of the city and maintained relationships withother states. The population was divided into three states: free congregation,an officer of that service by the governor allocated plots of land, and small kingemployees. There were also slaves in the city.

At the end of XIII - early XII century. BC onEastern Mediterranean attacked Sea nations. As a result of their invasion Uharyt and many other cities have been transformed into ruins.

II end thousand BC moved to Syriaarameyi. With the arrival of their increased influenceCity Damascus which was located on ancient caravan routes. Residentsthe city bought from neighboring steppe white wool and resold incity of Tyre. Damascus smiths were famous for their superior steel weapons.

1. Compare lessons with activities for residents of the PhoeniciansAncient Egypt and South Dvorichchia. Indicate the similarities anddifferences.

2. Reason for the Phoenicians founded a colony?

3. What are the advantages of Phoenician alphabet beforeWriting of Ancient Egypt or the second anniversary? What are its shortcomings?

4. What glory - good or bad - went about the Phoenicians?

Consider that prevented association of cities in Syriaone state?