§ 24. Varna and Religion in Ancient India

With the separation of the tribes of Aryans in India, their religion is undergoingments. Major gods are minor (Indra, Surya). Varuna -ancient god of the night sky - is the god of rivers and seas. One of the main godsbecomes Brahma - "Lord of living beings,creator of the world. Two deities, who played in the religion of Aryans is not as significantrole, are the main gods. Rudra becomes known asname Shivy. And the earthly incarnation of God Vishnu considered Krishna in humanform.

About God Vishnu told thislegend. One of the demons was so strong that Conquered the World. Sought Vishnu reset it and was born on earth as a dwarf.He came to the devil and asked him to give him as much land asshalt thou three steps. Looked at the little demon dwarf and agreed. Indwarf that moment was extremely fast growth and has acquired an unusually largesizes. One step he made in hell, the second - on the ground, and the third - to the sky.So God Vishnu stripped the devil power over the world.

Brahma, Shiva and Vishnu arethree most important gods of ancient Indians. began to depict them ina man with many arms and three faces.

2. Belief in reincarnation of souls

The Indians believed that the soulthe dead do not go in the afterlife world and revive this soul depends on itmade in previous existence. If a person is not feeling povodyla, afterdeath of her soul can be born in the body of a worm or other wicked creatures.Atonement and guilt, may not return to the people. If a personperform all orders and live righteously, her soul can be reborn inkings or even divinity.

Ancient Indiansshowed mercy to all beings. After all, in their opinion, even in a smallanimal to live life  bereavement,parents, relatives.

The Indians believed thatAnimals, birds, insects think, feel and talking among themselves just aspeople. So some of them went with a broom, not to accidentally crush on the roadmidge or worm.

Every Indian from birth belonged to one of Varna.The Indians believed that Varna people divided god Brahma and thus determined their employment, rights andresponsibilities.

In its opinion on Usti Indians  Brahma created priests - Brahmins. So only they knowhow to read prayers, and can speak for God. In the religious booksBrahmin called "masters of the universe"  and people as their earthly gods. Thatserve, Brahman had to long to learn. When the sonBrahman was turning seven, he gave  to study teacher, also Brahman. He livedteacher in the building and keep all the housework. Training has been difficult.In all it was necessary to obey the teacher and respect him as a parent. Studentszauchuvaly entire books by heart. Completing studies in sixteen years.Parents of students gave the teacher a cow, a son looking for a bride.

After marriage Brahman has performed his duties and could take in his housestudents. Brahmin often lived at the Royal Court as priests and advisors. In elderlyage when appearing grandchildren Brahman son left home and became a seniorDesert. He went to the woods, oselyavsya and live alone. Most of the timespent in prayers, ate only berries, lived in a smallsty. This would provide the best Brahman posthumous fate.

With its powerful hands,According to the myth, Brahma created warriors - KshatriyaTheir duty was to take part in wars andmanage the state, because they are endowed with strength and courage. Chief among Kshatriya warriors king.

With his hip was believed Indians Brahmacreated them to third Varna – vaysh'ya,whose duty - were seized farming, animal husbandry, craft andtrade.

Three Varna - Brahmin Kshatriyaand vaysh'ya - Called "twice born".In day of age theykept a special ordinance, and where to be compared to the second person's birth.

With their dirty feet, according to myth, Brahmacreated services which went into Varna Shudra. Their duty was to serve another three strata.

There were still people who are not included in any of the Varna -untouched. They were outcasts in society, and they all treated withcontempt. They were forbidden to live in towns and cities. Untouchables worespecial clothing (after death), so no one accidentally came up and touchedto them, because it could desecrate another person.

Their possessions - a dog and donkeys, their food they should eat from brokendishes, served by decorating their black iron. They should alwaysperekochovuvaty from place to place. The duty was untouched cleaningdirt, rip skins of dead animals died. If they were in town,then gave it to know a special bell. People from other Varnaodvertalysya or go with the street, not to see "ugly beings ".

The division of population Varna regarded as eternal and unchangingosvyachuvavsya and religion. Marriages between people from different Varnaconsidered unacceptable. Jump from one Varna toanother was impossible. For the same crime representatives different Varna punished differently. If a person withlower Varna osmilyuvalasyaraise a hand to Brahman, he chopped his hand. For murder Shudra Brahman subject onlyrepentance and fine, as well as for killing animals. And if Shudraapplied to the teaching of Brahman or arguing with him, he inserted in the mouthpiece of the hot iron or boiling oil vlyvaly.

Religion gave people with lower Varna Only one hope- if they surrender their fate and carefullyperform their duties, they will be born after the death of a warrior kingor even Brahman.

One of the oldest on earth world religions - Buddhism.He appeared in Article VI. BC in India. The founder of Buddhism was Tsarevich Gautama,which was later called the Buddha.

Legend tells that from the TsarevichBirth lived in fabulous luxury. His father ordered to surround the building of highwall that nothing worried her young life. Prince argued that life everywhere is the samebeautiful. He even speculated that there are evil and sorrow, death andsuffering, sorrow and pain, old age and illness. Once he saw an old manpatient, stooped old man. Another time - ill man who was lying onroadside. Soon he saw a dead man carried to the cemetery, whichweeping women. These three cases have opened the eyes of the king's son and had himdeep impression. He learned that in this best of all worlds is not soperfectly, as it seemed to him so far. Finally, the fourth time hemet with poor monk, who asked alms. Prince was impressed by hisworthiness, concentration, calmness. And he decided to become a hermit, a 29-year-oldage, he secretly left home, a young wife and soon-bornson.

He took the cup in hand to collect almsand went on foot from one village to another. Lived alms, watched and continuedtheir views. One day during meditation, he came to know wisdom andgreat truths of salvation. Since it became known - Buddha ie Bright, sage. 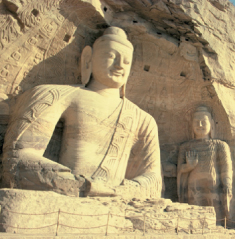 The Buddha taught that any life is accompaniedsuffering. The cause of suffering - the desire, the lust of power, wealth,Fame, fortune. If people want to escape from suffering and find eternal life,should lead a righteous life and make the following rules: do notdamage to living creatures, not to steal, obtain daily bread by honest work, talkbut the truth, avoid envy, flattery, gossip, do not drink intoxicating andzadyvlyatys beware of women. The only way a person escape, it will notover again and be born again on earth.

Disciple and follower can become a Buddha - a rich andpoor, king and slave, Brahman and inviolable. All they could escape fromsuffering. For many years the Buddha traveled to India. He has appeared manyand disciples. Winter and summer followers of Buddha walked barefoot tosometimes crush a worm or insect. Before you drink filtered water,because it also could be living creatures. To avoid damage to earthworms,dont rozpushuvaly plow.

Many Indians believed that after death the Buddha waschief of the gods. His teaching - Buddhism - spread widely in India.Buddhism has achieved much success in Asoka, Which itselfaccepted this faith. Then it was founded several monasteries. Later Buddhismspread throughout the Asian world.

1. What changes undergone religion Aryans after their resettlement inin India?

2. Spread the word Varna in India. Can they occur in primitive times?

3. Do you thinkfair division of the people Varna?

4. What is common, but other than that in representations of Indians andEgypt death existence (the other world)?

5. Who was the founder of Buddhism? What are the commandments of the righteouslife he preached?

6. What attracts you to the legendary image of Buddha and histeaching?