Indians have achieved great success in mathematics. In AncientIndia could extract square and cubic roots, was opened theorem, weknow as the Pythagorean theorem. The numbers that we use andcall in Arabic, actually invented by ancient Indians. They are goneto the Arabs. It is in India now use to denote the zero mark. Number 10multiple of ten were considered sacred in ancient Indians, went awaydecimal system of counting. Now Indian counting uses almost the entire world.

Some achievements have been in astronomy. By staroindiyskymcalendar year divided by 12 months, each month divided by 30 days. Throughevery five years added a leap month. In V-VI cent. BC India hasknow the law of the earth gravity that Earth has the formballs and rotating around its axis.

In ancient India knew the secret of smelting pureiron. Even nowadays in large laboratory, scientists can extract onlya few grams of iron. In V century. BC of pure iron waspoured into India's small seven-meter column weighed six tons. And in 1 500 yearsin this column do not rust.

The biggest development in ancient Indiamedicine has achieved. Her achievements and successfully use modern doctors. Formaking drugs more often were used herbsand minerals. Indian doctors were able to exercise the bone to heal fractures,restore noses, ears, lips, lost or maimed in war or by a court.Indian surgeons successfully doing complex operations. But not all secretsstaroindiyskoyi medicine failed to disclose in our time. Even now you canfound in India, a man who, using only your fingers, and without bloodpain aching tooth root, and will not be any complications. In the III century. BCfirst in the world in India was established hospital.

2. Art and Architecture in Ancient India

The most remarkable monuments of ancient India were stupa- Dome-shaped structures, which were kept in the Buddhist holy (partsBody of the Buddha and his followers). In Sancho in III.BC It was constructed by rolling a sphere surrounded by a fence in its centerbuilt GateTorana. TheyMultifigured images, imbued with love of nature.

In ancient Indian cave temples built - chaytyi. They cut down in the rocks: firstdone in office, and sculptures of Buddha and saints. Inchaytyi Carly in (south-east of Bombay) keptmany sculpted monuments. Above the entrance arch is made, which daylightenters the temple. Changing light (sunlight during the day and night lamp) createlarge effect, changing the appearance of statues which are reflected on the ceiling.

Of great interest is sculpture Ancient India. Reached us from the time of the state Maur'ya hewn from boulders column. One of themstood four stone lions that looked at the four cardinal points, thoughguarding the borders of the kingdom.

A lot of us came statues and sculpted imagesBuddha and other deities. Yes, the walls of the cave temple Elefantdecorated with statues, busts, nature motifs, scenes from everyday lifeIndian people.

Ancient Indians invented the game of chess. It was called"Four arms" and was conceived as a battle between two armies.Pawns served in the infantry. In the center the second line were the king and his advisers -queen, both sides of them - the elephants, and on the flanks - the horses. Accomplishes alignmentWarships and chariots.

Great value for the history, beliefs and attitudesAncient Indians have their religious collections, called Lead. TheseThe sacred books of ancient India belong to thousands II BC andwritten in Sanskrit. The oldest of these collections are "Rigveda"containing mainly religious hymns dedicated to the gods.

In the Vedas can be found several legends about creation.One of them says: once there was nothing - no stars, no months, no sun. Only one chaos ruled the universe.So any water, which then gave rise fire. Subsequently, heat wasborn golden egg, which sailed in the waters of the boundless ocean.

A year in the Golden Eggs born ancestor BrahmaAnd the two halves of eggs have Heaven and Earth, betweenwhich Brahma put airspace. For someBody Parts Brahma created gods and men.

In the Vedas preserved ancient Indian legend of the deluge.One day a man named Manu brought water to wash hands. This waterhe saw a small fish and caught it. "Save my life, and Iwill save you "- said his fish. Manu was amazed and asked:" FromWhat did you save me? "-" the flood that will destroy all livingcreatures - fish meet him. "Until I'm small - continuedShe - I can devour other fish. So keep me in the pot. When I grow upperesely then my pit. When in a hole and I will work closely, it will take meSea. "Manu believed her and did as she ordered. During this period the fish muchgrew up. Once sailed the sea, she said: "The flood will come in a fewyears. During this time the ship and make me wait. "

All Manu did as ordered fish. So a few yearsFlood began. Manu went to the ship, it pidplyvla fish: "Bindship to my horn, "- she said Manu and dragged him tonorthern mountains. Fish ship commanded to bind to a tree on the mountain andget off the ship just after the flood. So Manu escaped, and all otherbeing removed.

From the works of ancient Indian literature, seemany interesting things about life, beliefs and attitudes of peoples of ancient India.Exceptional popularity in the country in great epic poem "Mahabharata" and "Ramayana".

In the poem describes the struggle between two rivalfamilies - Kourou and Pando. "Ramayana"consists of seven books. It describes the exploits and wanderingprince Rama.

In one of the legends tells how he saw Jackal crow.She sat on a tree in its beak shaft and eat. The clever jackal startedlaud her voice and asked that she sang. Crow and this temptedkarknula loudly. And at this moment tidbit of food fell from its beak and gotjackals.

In the fairy tale "about a crocodile and a monkey," explainsas krokodylyha wanted to enjoy the monkey heart. Itasks her husband, a crocodile, so he caught her monkey. Then the crocodilepidplyv to the shore and offered one of the monkeys to move it to another bankRiver. Not suspecting no evil, monkey sat on his back. When theyaway from shore, the crocodile told the monkey, which is awaiting her fate. Dodge monkeynot confused. She says the crocodile, which left his heart on the bank and itsto return to shore to take it. Crocodile believed the words monkey andswim back to shore. A monkey quickly climbed the tree and began to jeerduped crocodile. Many literary works of ancient India in the distantold have been translated into many languages and peoples of the world have enriched theirliterature. Ancient Indians along with the other peoples of the Ancient Eastmade a huge contribution to the treasury of world culture.

In the country Koshala just king ruled. It was inhis three wives of four sons. Rama was a favorite son of the king as a seniorshould inherit the throne. And once the king promised one of his wivesfulfill any of its desires. Asked it to send Rama to 14 yearsexile, and heir to the throne to make her son. As the king's wife pleaded nottheir desire to change, but could not persuade her. When Rama learned in thatpredicament got his father, he voluntarily went into exile.With him went his wife beauty Sita and brother Lokshmana. They settled in the woods, in a simple hut, whichthemselves  built. There's different with them koyatsyafabulous adventures.

Heard about beauty Situ mighty king  demons Ravana,ruler of the kingdom on the island of Ceylon Lanka. He had 20 hands and 10 duzhyh slyheads. Cunning king of demons stole the beauty and took her to Lanka. Only oldHawks saw the king and stood up for Situ. Butpowerful Ravana in bloody fight cutshis legs and wings. Flying in the sky Sita sawbottom of the monkeys. She threw them scraps of her dress, they reported to Ramah, whereis his wife.

Having learned from the dying hawk, which is Sita,Rama and Lakpimana sent her to the south. them toassistance came army of monkeys and bears. Monkeys built a huge bridgeisland executive who perepravylos whole army. Ahead of the army ypily Rama and his brother.

Finally angry Ravana came from Ramah infight. God Himself Indra Rama decided to send theirbrilliant chariot, which was his bow, arrows, spear and armor. And crya battle that nobody had seen since the creation of the world from the sky in thiswatched the fight and the gods and demons. Warriors and Frames Ravanstopped the fight too and followed them. Magic arrows turned king of demonsthe flight of venomous snakes. And meet them flying arrows frames thatturned into gold birds and serpents destroyed on the fly. Seemedvictory leaned to the side frames. He darts his head vidsikav kingdemons, but they immediately vidrostaly. Then Rama took a quiver Indra burning arrow and released her with a bow. I shouted wildly RavanaWhen an arrow pierced his chest. Desyatyholovyy kingdevils fell from his chariot and lay dead. It was won a great victory.Rama rescued Situ and returned with her Koshalu, Where he became king.

1. What scientific discoveries and inventions were first madeancient Indians?

2. Tell us about the features of Indian architecture.

3. In the Vedas preserved the legend of creation and flood.Do you like Legends of the other peoples of the Ancient East? What they havecommon, but other than that?

5. What the ancient people's concept of natureare reflected in these poems?

6. Read the contents of the poemRamayana.Think about what features people respected and admired Indian people. What characteristicsHe condemned and despised?

7. What do you like in the works of Indian art? What exactly? 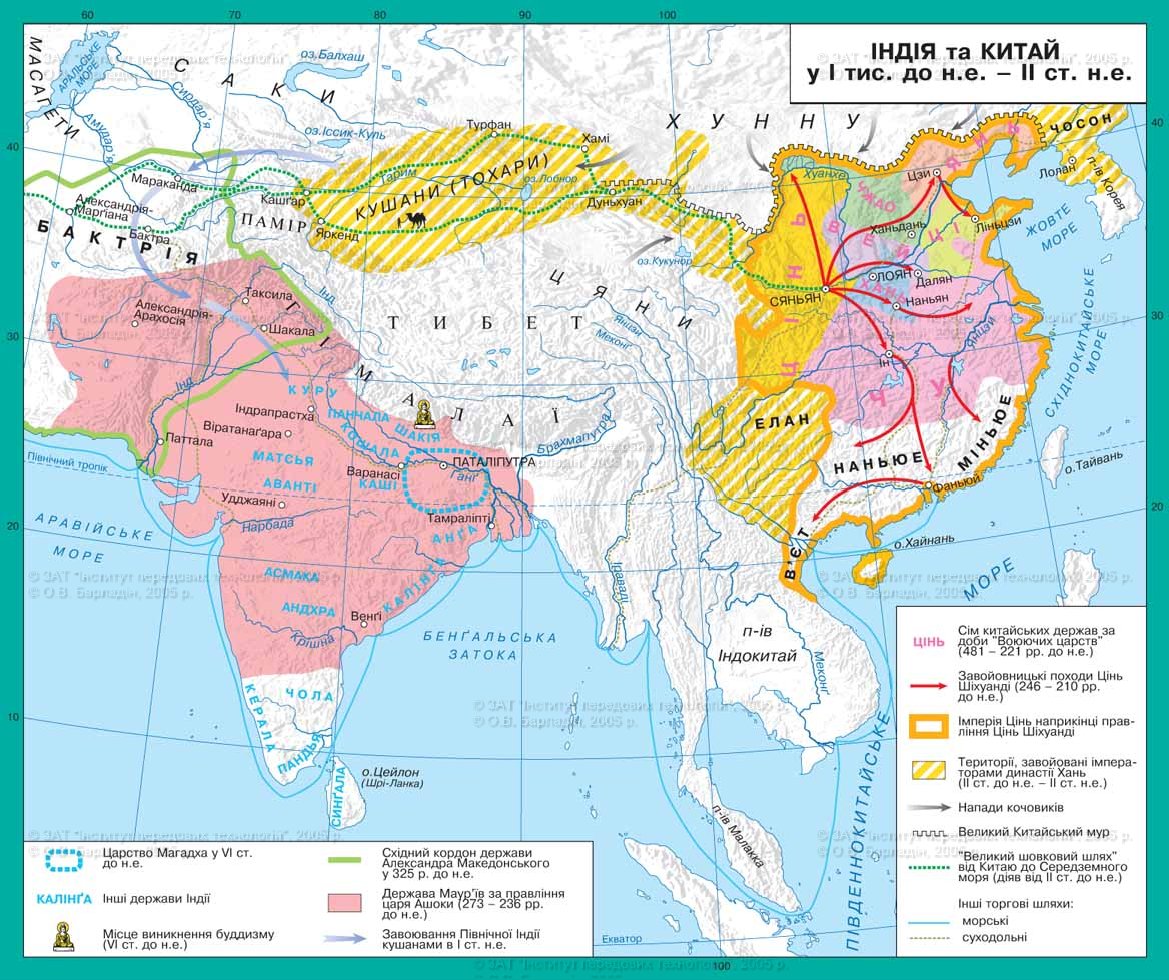 India and China in the preBC - Second millennium BC