In the V century.BC it flourished during the Greek world. But at the beginningcenturies the Greeks had in arms to defend their freedom andindependence against the powerful Persian state, which sought toconquer Greece. Hiking the Persians against the Greeks we call Greco-Persian wars (500-449 BC)although most Greeks in those days were called Media. They believed that the Medes, who previously lived inAsia Minor and were subjugated by the Persians are the same people as the Persians.

The maincauses of war were: 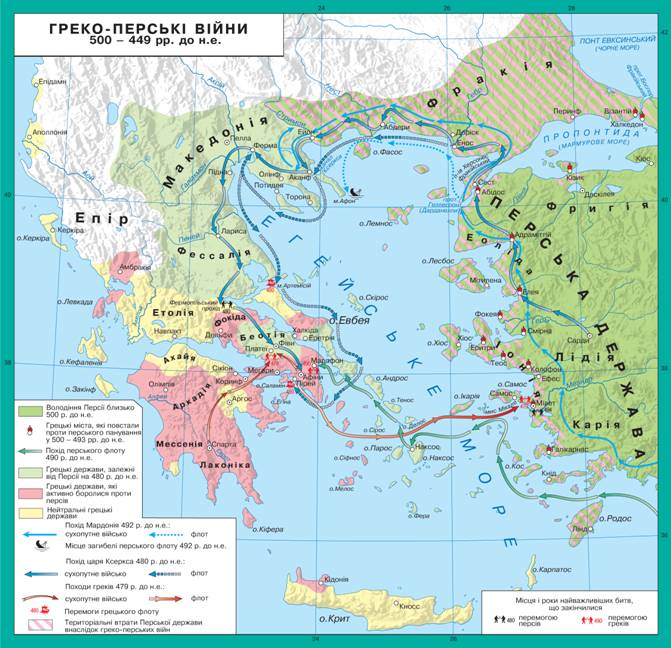 2. Hike Darius against the Scythians

Beforehow to make a campaign against the Greeks, the Persian king Darius I decided to makemarch against the Scythians, who lived in the Black Sea steppes. This campaign of Darius Itried to solve two problems: first, to punish the Scythians, on their raids, whichthey performed in Asian Persian possession, and, secondly, to provide rearin a future war with the Greeks.

In 513, theBC Persian army, by Greek craftsmen built bridgesBosphorus and the Danube River (Ister) Entered intooutside the United Scythia. Protection of bridges, the Persian kinginstructed his allies Greek rulers, tyrants Ionian cities. Two monthsPersians took a hike deep into the steppe. All the time the Persians pursued without successelusive nomads who in the way of the Persians burned pastures and coveredwells. Also Scythians committed swift raids on the Persian army osypayuchyyogi arrows, causing significant losses. Scythian king Darius sent multivaluedgifts: mouse, a frog and five arrows. This is a message meant: "If you, the Persians, as the birdsnot fly in the sky, like mice or not zaryyetesya in the earth, as frog or not poskachete in the swamp, it is not then return back, because youimpressed arrows.

Meanwhileone of the rulers of Chersonese Miltiad pidmovlyavtyrants of their colleagues guarding the bridges,  destroy them, to the Persian army could not return. However, those notlisten Miltiada, Fearing for their future. Whenbleeding and bleeding, with large losses of the Persian army with Dariusregressed ineffectual campaign, Darius told the appeals Miltiada. Mildiad realized thathe did not pozdorovytsya, Runs to their homeland inAthens and Darius of those times was the Athenians considered their main enemy.

In 500 g.BC Greek city-states that were located on the coast of Asia Minor,rebelled against the authority of their tyrants and Persia. Led rebellion became richcity Miletus. Revolt against the Persians went greatarmy. On the call for assistance responded to only two cities: Athens, which sent20 ships, and Eretriya - 5 ships.At first success was on the side of the rebels, they even made a daring raid oncapital of the Persian province of Asia Minor city Sardisand burned it. But the struggle was uneven. After six years of resistance to rebellionwas suppressed. Brutal Persians to crack milettsyamy.Temples of the city were destroyed and people were given as slaves and in uhnanodeep into Asia.

AfterDarius rebellion And ordered his servant to remind every day: "Lord,Remember the Athenians. "

Persian King Darius sent his messengers in Greek cities demanding"Earth and Water." Some cities have recognized the power of the Persians. But Athens andSparta refused to do so, they killed the messengers of Persia. Darius startedpreparation for the campaign, which led his commanders Datisand Artafern.

In 490, the BC than 42 km from Athens on the plain near Marathon boarded Persian army. Towards her with tenthousands of foot soldiers made Athenian commander Miltiad.He arranged the troops so as to deprive the Persians of their main strength -cavalry, which attacked from the flanks and zmykala them. Several days were Persians andGreeks against each other. The Greeks did not want to change an advantageous position. Persianshoped to coax them to the plain where their horses could do.

Miltiad focusedmain forces on the sides phalanx. Persians approached the Greeks and began attackingtheir hail of arrows. Towards moved closed group hoplitiv,first step, then run to quickly overcome the space that was underfire. 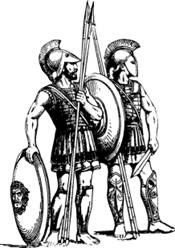 The first shot hitPersians on the ground, but then they began to besiege the Greeks, the center prohnuvsya phalanx.The enemy is already prepared to celebrate victory, but both sides of the Greek unitpushed forward and zimknuly Persian army's flank. The enemy could not standpressure and ran away on the ship. The Greeks managed to grab seven ships.In the Battle of Marathon the Greeks defeated the enemy that muchexceeded them numerically. This is because they fought in defense of theirmothers, wives, children.

GLAD TIDINGS inAthena brought the messenger, who run 42 km and dropped dead. In memory ofthis event at the Olympic Games began to spend big on the marathon distance. 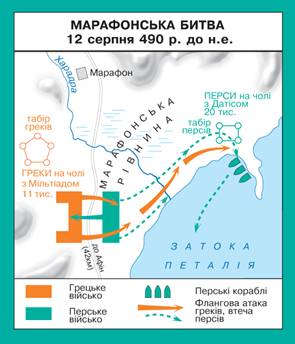 Winner of Persia Miltiad received from citizensa prize: a painting that depicts a battle of Marathon, he waspictured in front of other strategies. On request Miltiada,crown his laurel wreath on one of the popular assemblies of citizens responded:"When you MiltiadOne smite the barbarians, and thenvimagay awards for themselves ".

Fate Miltiada tragically occurred:Athenians first set it led the fleet for the conquest of the islandsAegean Sea, but after the first failure was accused of treason,awarded to a huge fine and thrown into prison. One year afterbattles Miltiad died of wounds in prison.After that was buried with honor in the tomb along with 192 Athenians whodied in the Battle of Marathon.

ThroughTen years after the Battle of Marathon the Persians launched a new campaign against the Greeks.At the head of the Persian army was XerxesThe son of Darius. Xerxes said: "We will impose the yoke of slavery as the perpetratorsbefore us, and innocent. "to the Persian army and soldiers wereconquered countries, including Asia Minor.

Spring480 BC Xerxes with hostcrossed from Asia to Europe through the Strait of Hellespont. When the storm destroyedfirst bridge, the king ordered the construction not only kill but also to punish the Seavysikty zakuvaty Hellespont and whips him in shackles.

MajorityGreek city-states united into one union, he led Sparta. In general31 States participated in the fight against the Persians. Eachgave his warriors and their ships in a joint army and navy.

Xerxes sent messengers to the Greeks with the demand to disarm. SpartanLeonid king replied: "Come and take." Then the messenger, hopingscare the number of Greeks the Persian troops, said: "Our arrows anddarts you will close the sun. "Leonid said:" Well, we willfight in the shade. " 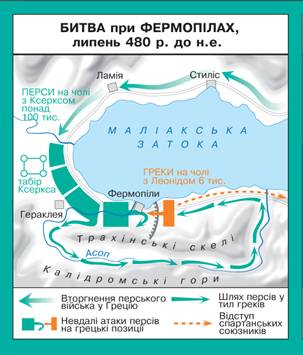 Xerxes came to Thermopylae and stood next to the aisle. Four daysopponents did not start the war. On the fifth day Xerxesordered to attack the pass. The attack of qualifying Persian troops had no success.Defenders of Thermopylae cajolery tactics used by enemy forces andpredation of small groups. They made as derogating and zamanyuvalyof the chasm in the Persian troops, entering them in the melee.Enemy attacks were unsuccessful.

Two daysfierce battles. The Persians could not do anything the Greeks. Night on the third dayPersians had a traitor in the rear of the Greek army. Leonid ordered to retreat toallies, except the Spartans. Grin fought three hundred Spartans led by Leonid.All of them died defending their homeland.

Broken bythrough Fermopilskyy pass, the Persians occupied the middleGreece. Living in Athens left the city. All men who could still keepweapons, went into the army. The rest of the Athenians moved to the Peloponnese and the island Salamis.

28 September480 BC There was an important sea battle off the island Salamis. From the Greeks it has been involved in 370 ships200 of which belonged to the Athenians. From the Persians - 700 ships. Greek ship(Screening) had three rows of oars on each side, were light and moving inCompared with heavy and unwieldy ships Persia. 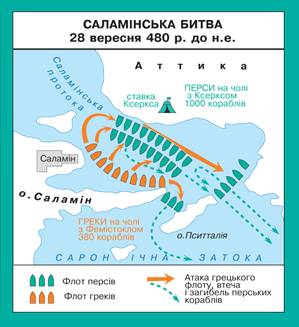 Atticgeneral Themistocles expected to lure the Persianships in the most narrow straits and there give battle. For this purpose it wasto pretend that its fleet retreats. Percy subjected to this trick andwent on the offensive. King Xerxes watched the battle,sitting at the top of his throne, surrounded by scrolls.

Retreating,Greek fleet enticed the enemy in place narrowest strait. Here, the Persians could notkeep your unit and began disorder in action. They do not have space formaneuver. Their clumsy ships collided with each other, sit aground.Greek sailors were familiar with the terrain, their ships - a shuntingand fast. Percy began to retreat. The Greeks, pursuing them, and flanks zimknulyclung to ring the retreating enemy. This battle of the Persian fleet lostMore than 200 ships.

The fate of the hero Salaminskoyi Battle appearedtragic. Themistocles was suspectedtreacherous relations with the Persian king. Without waiting for punishment Themistocles runs in Persia, where he found refuge inhis former enemies. Thanks to his intellect and cunning, he entered thecredibility of the Persian king and earned in exile in luxury and pleasure. But whenthe king demanded that he lead a new expedition against the Greeks, Themistoclesadopted a poison, not to betray the motherland.

In 479, theBC united Greek armies clashed in a fight with the remnants of Persiatroops near the town Plateyi. Exactly Plateyska Battle played a key role in Greco-Persian wars. Having gained the victory, the Greeks finallydefeated the enemy and drove him from Greece.

Battle ofSalamis and Plateyah putPersians end field trips to Europe. Greek so believe in themselves that they wouldwent on the offensive against Persia. Over the next 30 yearsthey occupy in the Persian shores of the islands and the Aegean Sea, carried out raidsCyprus and Egypt.

CrucialGreeks in their transition to the offensive was the creation of a powerful fleet. GraduallyFleet management over the Greek states moved to Athens. Due to militarytalent commander Aristide Greeks winning one victory after another, completelyforcing the Persian fleet from the Aegean Sea. In addition to its Aristide were famousnoble and incorruptible integrity, and because the Greek state was entrusted to himdetermine the contribution of each country to hold a joint fleet. On this basis, at 478-477, theBC arose Deloskyy Union (later hisnamed first Athenian Sea Union for dominance in it of Athens). Athens, asone of the most powerful states in Greece, gradually appropriated by the general treasuryUnion and were treated as allies of their own subjects: to put powerthe right of rulers, the court did so. At the end of Greco-Persianwars union united 400 Greek policies.

Onfinal stage of the war for liberation from the Greeks turned into predatory.But trips to Cyprus and Egypt were not always victorious for the Greeks thatvysnazhuvalo their strength and finally, the 449 BC parties agree topeace ("Cali Peace). In thisPersia peace kept by a Cyprus, but gave up the islands and maloaziyskohoAegean coast. Persian fleet was forbidden to appear inAegean.

ForGreece War had huge consequences. Yes, Athens came from the war strongsea power, the head Deloskoho Union. In Athensfinally established a democracy. It was given impetus to economic developmentAthens and throughout Greece. At the same time was gaining strength conflict with Sparta, whichdid not want to see the dominant force in Athens Greece.

Fate Aristide, like other heroes Greco-PersianWar proved tragic. Athenians treated suspiciously too popularleaders, suspecting them of seeking to establish tyranny. Aristide was convictedand all his property confiscated. Although this decision was reversed Aristidedozhyvaty ever had in poverty but in reputation.

1. Which countryinitiating wars (the aggressor)?

4. For what purposePersians made a hike in Scythia?

5. What wasresult of a campaign?

8. Why Persiansbelieved that victory over the Greeks will be easy?

9. When wasBattle of Marathon? Why it got its name?

11. Based ontextbook describe the Marathon battle.

12. How the AtheniansDarius twice insulted?

15. When and howorder was established Athenian Sea Union?

16. What are the mainResults and conclusions Greco-Persian wars?