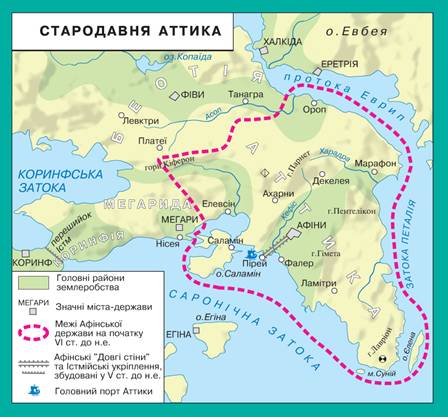 1. The emergence of the Athenian state

InAverage Attica region of Greece is located, and where there Athenian state.In the western part of Attica is plain, where you can engage in farming.The rest of the area was mountainous, where its inhabitants are bred sheep, goats,pigs. For growing crops land of Attica was of little use. SoAthenians preferred vineyards and olive trees and cropsbought or traded in the neighborhood. 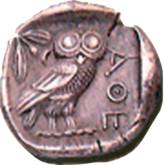 Poor forfarming land of Attica was rich with clay, marble, iron, silver, whichcontributed to the development of various crafts.

MainAttica city was a city AthensOneof the oldest cities in Europe. Home city pioneered settlement emerged in thehill in the middle of the plain. Steep slopes of the hill was a natural protection forDomestic settlement of enemies, pirates. Walls constructed subsequently transformedsettlement on a real castle - citadel. 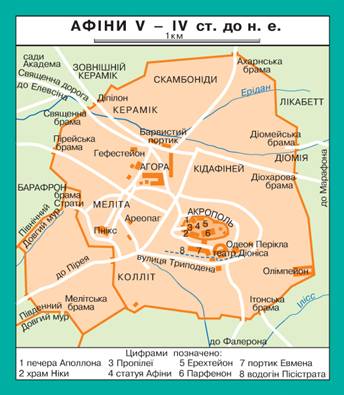 In mythsexplains that when the city was built, but has not had his name onright to be their patron god of the dispute were Poseidonand the goddess Athena. The gods decided to award the victory is a gift for the city whosewill be most valuable. Poseidon trident struck byrocks and appeared on `water source, but the water has turned saline because Poseydom was a patron of the seas. Then Athena vstromyla hisspear into the ground from which grew an olive tree. All present acknowledged Athensmore valuable and the city was named in her honor. Athenians praised hisProtecting building in her honor temples and statues.

Cityincreased rapidly, he was close to the hill and the Athenians began to build theiraccommodation in his foot. Center of city life was the market area - Agora,where brisk trade was conducted.

Freepopulation of Athens, like the rest of the Greek policies consisted of peasants, artisans andnobility. Notables people called aristocrat (the best, noble). With itsorigin they were holding in their hands the management policy (some noble familieswere descended from the gods, heroes, ancient kings). By exceptionalfamilies constituted the Areopagus - Council notables who tucked all affairs of the city.Areopagus annually elect nine governors - archon directlycarried authority (priest, military leader, "Minister ",six judges).

Allhumble citizens whether rich or poor, they called Demosie the people. Demos was disgruntled all-powerful aristocrats and also soughtparticipate governance.

Absolute powernobility gave her an opportunity to resolve all disputes in their favor, even so it wasviolating the customs of steel. This state oburyuvav people who claimed to write longpractices that judges decide cases not as they please, and in accordancewith the law.

In 621BC archon Drakont was finally writtenlaws, but added to them not only norms of ancient customs, but also added manyits. Many of those laws may seem strange to modern people. Yesfor example, animal or an object can be judged as well as man. Ifchastise or bull dog zalyhav man they were to be expelled outside Attica,as well as tiles that accidentally fell on the head and killed a man.

The mainmerit Drakonta was that he managed to putend vendetta. Thus, all cases of murder were resolved in court, notHis family, who revenged himself abuser.

Aboutlegislation Drakonta said that they were "written with blood,so that even the smallest theft of vegetables, fruits anticipated death penalty.When Drakonta asked why such strict laws, itreplied that "no more, no less punishment he could not come up."

Onnow too strict punishment measures called drakontivskymy.Nevertheless, the Greeks believed that the best bad laws, which follow, rather thangood, are not enforced.

Severelaws, although somewhat streamlined life in Athens, but did not solve the problem.Fighting between the demos and the aristocracy continued. Aristocrat, using itssituation of the various ways the earth taken from the peasants, and their debts byturned into slaves. The situation was threatening and could explode a national uprising.It was decided: to elect the governor, which accommodate demos of aristocracy.

In 594, theBC was elected first archon Solon, a man of noble birth,but who enjoyed respect and trust in demos for his honesty and integrity.In younger years he was a merchant, has visited many countries, wrote poetry and wasvery funny man.

Solon had demos for reform and governance. It wasrelief peasants, canceled the debt slavery, canceled debts, destroyedDebt stones removed from the slavery of those who got there by debt. Partfarmers with the freedom of their land received backward. It was forbidden to take Atheniansslavery for debts. In rich economies may be usedwork only slaves of strangers.

Reforms undermined the political elite domination, nowpolitical rights depended not on znatnosti, and the size of the property.

All male population - natives of the Attiki considered citizensAthenian state.

All Athens Solon divided the population into four groupsDepending on the property and profits. The first and second groups were the richestpeople, the third - middle, the fourth - poor (fety). All four groups were eligible to participate in the revived national meetings andformed a national court. But the highest office in the country was occupied by representatives ofonly the first group. Up of four hundred were allowed to elect representativesfirst three groups. Judges can choose any of the four groups.

The first three groups should serve in the army man- warriors and horsemen. The fourth groupwas to serve during the war in light infantry or sailors on ships.

In no groups have included people with their originsAthenians were not considered, as well as slaves. They were not allowed to controlstate.

Reforms Saline glorified him as the founder of Atheniandemocracy, ie democracy. He himself was very proud that reconciledaristocracy of the demos.

Havingabove-mentioned measures taken Salon promise of Athenians for 10 yearscomply with its laws, and he went on a journey and settled on the islandCyprus.

ReformsSaline contributed to further development of the attic, laid the foundations of democraticsystem. (Democracy - the power of the people).

It took thirty years from the start of Solon, himselfhe was already elder, as in Athens Troubles began again. Nobility did not wantshare power with the humble, the peasants supported the distribution of landowners' lands.Wealthy landowner, a relative of Solon Pisistrat wasact to protect farmers and poor people. He wanted by the peoplebecome the head of the Athenian state. He succeeded. Of 537 to 527, the BCIn Athens, established tyranny Pisistrata. Pisistrat opposed the wealthy aristocrats, some of themwere forced to leave the country. Their land was divided among the peasants. To obtaincommitment merchants Pisistrat captured the importanttrade routes from the Aegean to the Black Sea. He promoted the crafts and trade, introducedholiday in honor of Dionysus and theatrical performances. But interests polisnohoteam did not coincide with the personal interests of the tyrants, that soughtestablish sole and hereditary power. After death Pisistratahis son Hyppo rule was brutally, like mosttyrants. Tirana ceased to be people's guardian because of city-statesthem out. The last 510 was driven in BC son Pisistrata Hippiya.

The value of tyranny was the fact that birth policiesnobility was deprived of his privileges.

To avoid establishment of tyranny in Athens State Klisfen proposed law ostracism - Captivityexile. Every year people gather to determine if there are amongthese people who are a threat to all. Distributed to all shards (ostraki), and everyone can write the name of the person whoseemed dangerous. If the same name shodylosya many people, theThis man drove out of town for 10 years. Banishment by ostracismwas considered honorable, not property konfiskovuvalosya, Familynot evicted. In 10 years exile could return and enjoyrights of a citizen. Klisfen electoral reform heldRights: Now all citizens have equal political rights regardless of theirproperty.

Klisfen proposedconduct the election meeting not for families, and residence. Thus eliminatedremnants of ancestral – tribal relations and divided Attica not by genericsigns, and for the territorial. Neighbors gather together become one town orpart of the city. Now birth nobility was unable to influence the dependentpeople. All were treated equally in the state. The most important issues were resolved ongeneral meeting of citizens, where everyone had the right to express their opinion.Election officials should be accountable to the people. Reforms Klisfena finally adopted in democraciesAthens.

1. Howoccupation contributed to the natural conditions of Attica?

2. WhichAthena made the city a gift? Why so?

6. Whatwas caused by the emergence of laws Drakonta?

7. Thatled reforms salted? When they were taken?

9. WhichSaline had the imprint of reform on the further development of the Athenian state?

10. Whatwas caused by the emergence of such phenomena in political life as tyranny?

12. Whatpositive and negative role played in the political tyranny attic?