§ 46. The fight for supremacy of Rome in the Mediterranean (textbook)

§ 46. Struggle for Romedomination in the Mediterranean 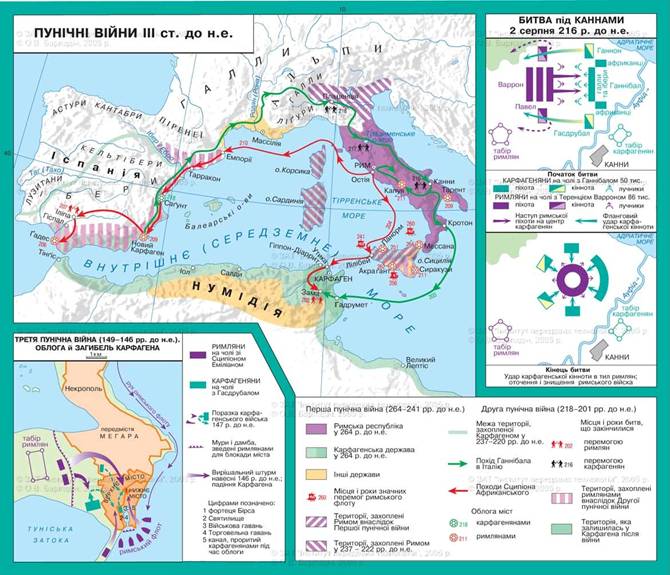 By combining its power under Italy, Rome wanted to rule in the WestMediterranean. But here he encountered his former ally - Phoeniciancolony of Carthage. Carthage was a huge and fabulously rich city. Hisresidents engaged in trade, brought from Spain, iron, tin, silver, withSardinia - copper and bread. Imagination impressed contemporaries shestypoverhovi houses, grandpalaces and churches of Carthage. The city at that time was just about 700 000persons. He was surrounded by three rows of four walls banitamy. Inmilitary stables were 4000 horses and 300 elephants fighting. City centerlocated fortress - Beers. Army of Carthage,was hired. The main force of Carthaginians made fleet.

The Romans sought occasion to go to war with Carthage. The first step was the release ofthem in 264, the BC Carthaginians captured city Messana in Sicily. Thus began the first of three Punicwars, which lasted 23 years.

On dry land, the Romans successfully competed with the enemy. They were under siegecity SyracuseAnd the tyrant of the city HiyeronII was forced to sign a peace agreement. MuchGreek cities also went to the side of Rome. But the victory over Carthagehad to have a powerful fleet. Insistence by the Romans in a short timebuilt 120 ships, trained and prepared to battle about 30 000rowers. In 260, the BC in battle under Milamy Roman fleet passed the firstbaptism of fire and gained a significant victory. In her honor was erected in Romemarble columns decorated with noses captured Carthaginian ships.

У 255 was BC fate turned againstAmong them: an ally of Carthage, Spartan commander Xanthippe,Regula defeated army, captured and executed consul. In addition, during the removal ofAfrica remains the Army Regula fleet was in a devastating storm, during which256 ships were lost.

But this defeat the Romans war was not over. She broke with the newforce in Sicily. Military success was on the side of the Romans, until the island has not arrivedgifted Carthaginian commander Hamilkar Barka. Under his command of troopsattacked and devastated the south of Italy, although the defeatopponent failed. In 241, the BC warwornCarthage and Rome signed a peace agreement. Under the agreement, Carthage lost Sicily Islands,Corsica, Sardinia.

... Approaching, Carthaginians notice on the frontall parts of the ship raised crows (large metal hooks with fixed towooden bridges .- auth.). At first they did not understand and never surprised've seen devices ... During the fighting ships of every zchiplyalysya bydescribed devices, and people just transiting through the very crow, and the battletook place on deck. Part of the Carthaginians were killed, others with horror seemedenemy alone, because the sea battle into a land ...

1. Due to which, onopinion PolibiyaRomans managed to win the battle?

2. As the Romansused a new technical invention in the Battle Milamy?

Carthage has not accepted the loss of the islands and restoring power, againpreparing for war with Rome. Carthage army at that time headed by the son of the deceasedG. Barka - Hannibal. He was a talented military leader and fierce enemy of Rome. 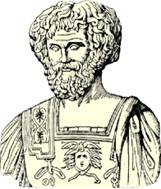 Carthaginians provoked the outbreak of war, capturing the city Sagunto,which was an ally of Rome. Hannibal then, in 218 was BC began an arduous transition theirTroops from Spain to Italy through the Alps. Without reinforcement of HannibalApennines battles moved to Rome. Win at Trazymenskoholake, he again met the enemy near Cannes. It was one of the most famous battles of ancient history.Reorganized by the Roman army sample Hannibal faced troopsconsuls Gaya Terentsiya Varro and Lucius Emilia Paul.

Hannibal, having an army, deliberately weakened the center and increased the flanks. Heintended to surround the enemy. When the troops stormed the center of consuls, Carthaginiansgradually receded until their ranks did not form a crescent. Romanscontinued to battle, not noticing that surrounded them. For the Romans lost pivdobyalmost 50 000 soldiers. Died Emily Paul and 80 senators. Losses were Carthaginiansabout 6000 troops. Hannibal came to Rome, but without reinforcements,was forced to return to Carthage.

Decisive Battle Second Punic War took place in 202, the BCnear the city of Zama, near Carthage. Forces were equal. Hannibalexpected to win by war elephants. The Roman commander Stsypion African told his plan and was willing toimpact. Battle elephants Romans encountered rain of stones and spears. PartElephants frightened and turned back. Others continued their journey. ButRomans, killing the ringleader, directed movement of elephant corridor that it formed tworanks of soldiers. Hannibal, trying to rescue the situation, threw the battle cavalrywhich soldiers Stsypiona not only stopped, but forcedreverse. Hannibal was the last hope in battle hardened veterans.But the battle was already lost. Under the peace Carthage lost all its fleet andelephants fighting and had to pay a huge indemnity.

With a view to capture all the lands of Mediterranean Sea, Rome simultaneouslywaged war with other aspirants to these territories. The strongest among them wereHellenistic state of Macedonia and Syria.

In 197, the BC Romans after successful military operations have concluded a peaceagreement with the Macedonian king PhilippeAnd Vforced him to give fleet and pay a large indemnity.

Having concluded peace, the Romans in the Battle of Thermopylae (191 BC) andnear mountains Sypil (190 BC) were ableally of Macedonia - Syrian king Antiochus III. After the defeat in the war onRome, Syria lost its influence in the Mediterranean. However, Macedonia, despiteto defeat, remained relatively strong state and was an obstacle to the dominationRome in the Mediterranean.

In 168 p. BC Romans near the town Rosedefeated the Macedonian king, Perseus, son PhilippeV.Macedonia was divided into four provincewho joined the Rome.

Rome could now concentrate its forces for the final victory over histhe most powerful enemy - Carthage. 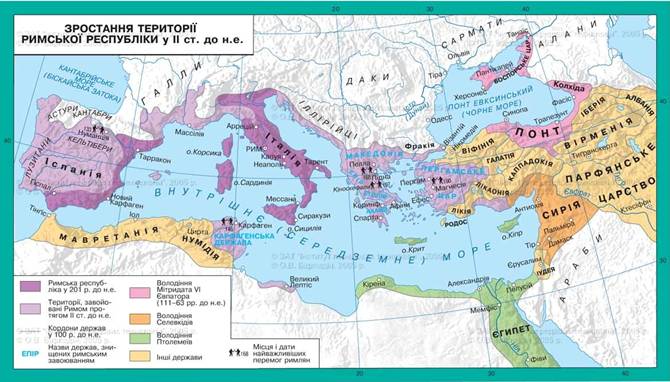 Growthterritory of the Roman Republic in the second century. BC

After the defeat of Carthage because of trade managed to recover their strength.Roman senators, led by Mark Cato required to begin military action tofinally break the enemy. Each speech in the Senate Mark Catoended by saying: "Carthage must be destroyed." In 149 was BC Romantroops landed near Carthage and came to the city. Its residents tobuy from the enemy, gave the Romans 2 000 military vehicles and 200000 sets of weapons. But the Romans thought so little. In 147, theBC Roman army led by CorneliaStsypionom Emiliano, son StsypionaAfrica, destroying the main forces of the enemy, surrounded the city. PerehytryvshyCarthaginians, who expected an attack from land, the Romans stormed the walls of Carthagethe sea and broke into the city. 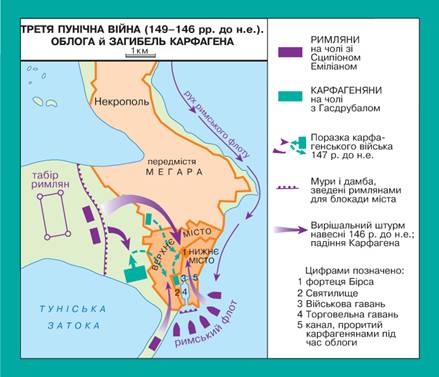 Battle for Carthage lasted a week. Residents defended every house, but the forceswere unequal. At the request of the Carthaginians by the Romans from the city issued 50 000women and children. Those defenders who remained alive, hiding in the temple and wantedset fire to it, but then were forced to surrender the enemy. All captured by the Romanssold into slavery, the city was destroyed and the ground where he stood Carthage and zoraly"Sow" salt. The former most powerful opponent of Rome became a Romanprovince of Africa.

У 146 was Romanscrushed the uprising in the Greek city of Corinth, completing conquest of Greece.She joined the Roman state as its two provinces - Achaea and Etoliya. Having won, exceptthis, Spain, Italy, Pont kingdom, Armenia,Syria and Palestine, Rome became a world power.

Contribution -monetary damages during the war in favor of the winner.

3. What are the main causes of wars with Rome, Carthage.