§ 13-14. Generalization on "Religious and cultural life of medieval Europe" (textbook)

The clergy was considered first as a medieval society. Because they performed work that was more important than any other earthly business - cared about the salvation of souls.

It is therefore not taking into consideration costs of resources, effort and time Europeans built huge cathedrals and numerous churches, clergy yielded tithe - a tenth of the harvest and other income. Wanting to save their soul, rich and poor gave their church property and land ownership. Even more, the society gave the church the most capable and educated children who dedicated life to serving God. The first condition was the only one that is replenished by immigrants with different states of society. Almost all famous scientists and thinkers, and the substantial the writers and poets, artists, musicians, belonged to the clergy.

In 1054 once in a single Christian church split, the eastern (Byzantine) Christianity separated from the western (Roman). Formed the Orthodox and Catholic churches. Catholic Church headed by Pope Rome and the Orthodox Church had no single leader and was dependent on secular government.

Christian Church in the West quickly realized it could play an independent role, with huge resources. Based on this, Roman Pope's X - XIII. led the fight for unification of all Christian the world under his rule. Gradually the church became the largest landowner in Europe, and the life of the church leadership is not something different from secular feudal lords. The clergy was not limited in its activities only church services and prayers. They carried out justice, participated in administration of the state, performing feudal features taught in schools and universities, funded by the royal event. For many, prayer has become only a secondary occupation. 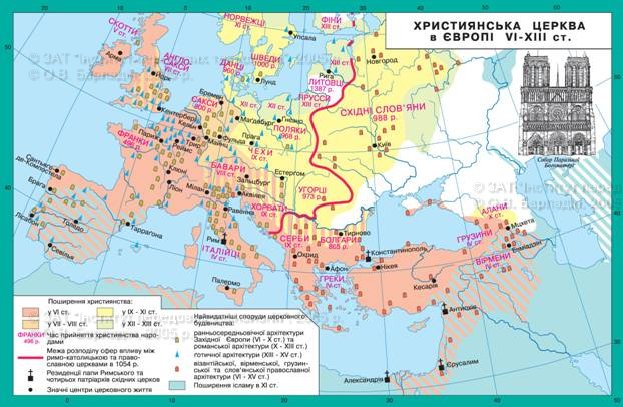 Vivid chapter of the Middle Ages were the Crusades. November 27, 1095 Pope II, in Uranus ClermontChristians urged to free the Holy Sepulchre. Moving in the Holy Land Christian host of ordinary people to monarchs. As a result of the First Crusade in Palestine faced four of the Crusaders. Generally held eight hikes. However, the fourth showed that the idea of holy war against enemies Christianity has lost any appeal and cross movement has lost meaning. In 1291 fell last stronghold crusader in Palestine.

The Crusades gave rise to such a thing as spiritual knightly Order. What became a significant factor of the medieval history.

In the thirteenth century. Catholic Church reached its peak power. But in that time she was old threaten danger - a heresy. Various heretical teachings quickly shyrylysya Europe. To fight against them church employed any means: persuasion, preaching, the Inquisition, the cross hikes. But the church as heresy curb and ultimately failed.

Fourteenth century. was the crisis for the Catholic church.  Pope of Rome lost its former power. Even for 70 years get captured by the French kings (Avignon capture). Ultimately the power of popes undermined Great Schism.

Dissension in the church forced to think. Correct followed by society to God. Again, the movement broke heretics. The strongest movement The upgrade of the church erupted in the Czech Republic and was connected with the teachings of Jan Hus. Although managed to control movement, disorders of the Catholic Church, it was not over. But that is another story.

Culture of the Middle Ages was closely connected with religion and church. Because religion is defined worldview of medieval man.

The first century of the Middle Ages called "dark ages" and unlikely they can be called favorable to the progress of culture. However, at this period was birth of a new European medieval culture that drew its origins from ancient heritage, culture, Christianity and barbarians. The first results of this interaction are felt during the "Carolingian Communities "(during the reign of Charlemagne).

In the next two centuries (IX-X cent.) In the culture again observed decline and it is "shut" on the walls of monasteries. Here on the walls reflections generated religious scholasticism - a method of logical thinking and learning. Scholastics wanted to know how interconnected God, the universe and man. The height of the medieval scholasticism was the activity Thomas Aquinas (1225 – 1274).

Educated people in the Middle Ages were relatively few. The rise of Europe that began in X century. Caused thirst for knowledge and the need in educated people. Education began to go beyond the monasteries. Since the XI century. Europe's emerging high school, which was later named universities. They studied family of free science "- grammar, rhetoric, dialectic, arithmetic, geometry. Last included geography, astrology and music. The first three were science "tryvium ", Four - "kvadryvium ".

The focus in the Middle Ages to study only the Holy Scripture does not satisfy the people who thought about the knowledge of environmental world. Since the Middle Ages embryonic research knowledge that became the basis for of science.

In the Middle Ages had a rich literary tradition. It has its origins in the heroic epic of the early Middle Ages. Romance, troubadour poetry and mizingers of a business card era.

In the Middle Ages, books were rare. They were expensive and rewritten by hand. But at the end of the Middle Ages there was a real revolution. With the spread of the invention of paper and printing (1445) Johan Gutenberg book accessible to a wider circle of people.

During XI - XV centuries. other known two major artistic styles that zastupaly each other - Romanesque and Gothic. The first style - Romance - ruled in XI - XII centuries., The second - Gothic - In the XII - XV centuries. These styles most clearly manifested in the architecture of castles and the churches.

In the fourteenth and fifteenth centuries. started in the Renaissance. Her homeland of historical circumstances has become Italy. The basis of culture Recovery was humanism. At the time, humanism is understood that helps to understand and explore the man. Culture Renaissance changed medieval view of the world, earthly life of man and his virtues. Man was placed in the center worldcreation.