All ills that have befallen Europe XIV - XV centuries. had great influence on church and spiritual life. Everybody was waiting for atonement of sins and the Last Judgement. But that commitment entered into contradiction with the holy lives far higher clergy, which would have to worry about the souls of the laity. These contradictions have caused flowering heretical doctrines. This time, the heretics were led by scientists, theologians, who were well known the Holy Scriptures. One of these theologians was Huss (1370 - 1415), Master of the Prague University of martyrdom which has become a powerful impetus to the insurgency in the Czech Republic.

Huss famed for his lectures and sermons. He knew and loved the common people. In his sermons Huss condemned the mess in the church, priests extortion, luxurious life of higher church hierarchy. Huss strongly opposed the sale of indulgences and pay for the celebration of religious rites. He demanded the imposition of severe penalties for those who bought the church office. Being a patriot of his homeland he was against German dominance in the country (the Czech Republic was part of the Holy Roman Empire, in a country ruled by foreign dynasties, all important government positions occupied Germans were also the best land in the ownership of German feudal lords). He demanded that the Czechs were masters in their own country, favored the development of Czech culture. He translated the Bible into Czech, which allowed people to become acquainted with the Scriptures. The main thing in his sermons was that he put words in the Bible above the authority of the pope and church councils. Being honest and principled man, he does not maintained the papal decree, which contradicted the Holy Scriptures. Thus the conflict of Jan Hus Church became inevitable.

rebellious and "victim" heresy Master called on council, who chaired the Emperor Sigismund was convened in the city of Constanta to do away with the great schism (split) and eliminate some shortcomings of the church.

arriving in Constance, Huss, with safe-conduct from the emperor, was ready to renounce his views if he is proven through the Scriptures that he was mistaken. But Catholic theologians did not want to engage in debate with a heretic, and demanded a simple denial. All requests and meet Gus belief that we should not impose on him "noose life sentence, forcing him to lie and go against conscience." Finally, it declared a heretic, despite the imperial safe-conduct, arrested and thrown into prison. But even that did not break it. He continued to advocate their views. By verdict of the cathedral July 6, 1415 Jan Hus burned at the stake . A whole Czech nation was excommunicated from the church. 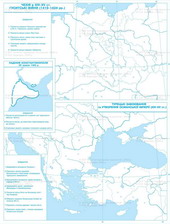 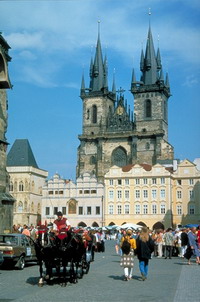 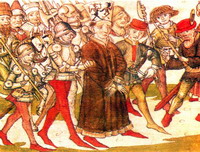 Jan Hus are to be burned. Figure XV. 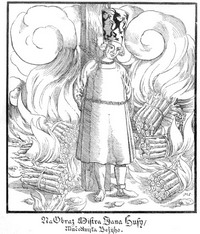 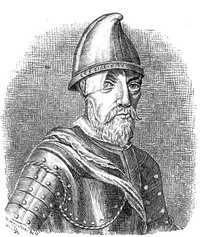