Poland - the largest of the West-states. XVI century. considered the "Golden Age" of its history. During this period, the reign of the last Jagiellonian dynasty of the Old and Sigismund (1506-1548 biennium) and Sigismund II Augustus (1548-1572 biennium) and Stefan Batory I (1576-1586 years) in the Polish kingdom ruled quiet and tolerance. With the assistance of monarchs in the country and spread the ideals of humanism burgeoning Renaissance.

population of Poland in XVI - XVII century the first half. numbered about 4 million people and its territory was 280 thousand square meters. km. The capital was Krakow. As Union of Lublin in 1569 and joining in Livonia in 1561 its population increased to 7,5 million people, and territory now reached 800 thousand square meters. km. With the Lublin Union from the Lithuanian authorities directly to the Polish Kingdom entered the Ukrainian lands.

In the XVI century. Poland ended the monarchy of a class in which to participate in public life were excluded representatives of merchants and urban bourgeoisie. Greater role in addressing all cases of public life was to play the nobility. The feature of the political development of Poland in XVII century. was that prevailing in the country is not absolute monarchy, and a kind of gentry republic. King, elected by the nobility had no right to make decisions without the consent of the Diet, which became the principal authority in the country.

King Stefan Batory and resumed participation in his country Livonian War and brought it to a victorious conclusion. During armistice, concluded on 10 years in Yam-Zapolsky, went to the Commonwealth Livonia.

King Zygmunt III Vase (1587-1632 biennium) decided to intervene in the events that took place at Moscow State during the sad times. He gave secret support Lzhedmytriyu I. In 1609 began an open Polish intervention in Muscovy. But hope Sigismund III of Moscow secured the throne for his son Vladislav failed. In 1618, between Muscovy and the Commonwealth were made Deulinske truce.

Polish government policy caused aggravation of social contradictions in Ukrainian lands. In 1648 started a national liberation war of Ukrainian people against the Commonwealth. It was led by Bohdan Khmelnytsky. On land, freed from the Polish government was established Ukrainian Cossack state - Zaporozhian Host ".

After signing in March 1654 the Ukrainian-Muscovite tsar's protection agreement over Ukraine course of the war has changed. The situation is complicated by the Commonwealth. Polish-Swedish war of 1655-1660 and subsequent years Swedish intervention ("Flood") caused the destruction of the economy and huge population loss.

in 1672 renewed the war with the Ottoman Empire, due to which the Commonwealth lost skirts. Polish-Turkish War, continued during the reign of Jan III Sobieski (1674-1696 biennium), which still managed to reclaim lost ground. However, his attempts to strengthen royal authority and the state as a whole experienced failure. Commonwealth gradually sank into a whirlwind of political anarchy that caused that late XVII century. it has ceased to exist as an independent state. 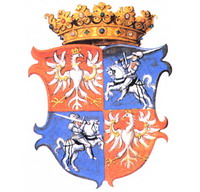 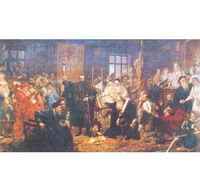 Union of Lublin (with pictures of Jan Matejko) 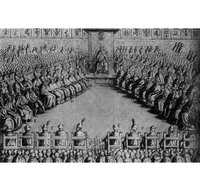 Meeting of the Polish Sejm 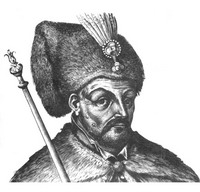 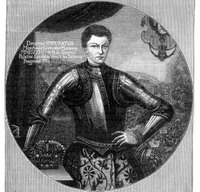 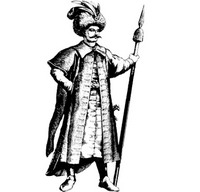 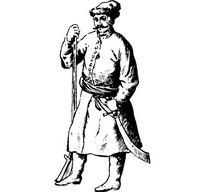 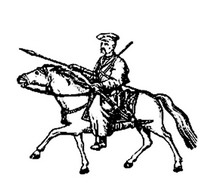 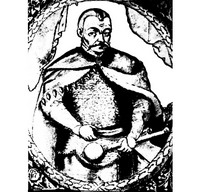 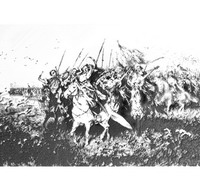 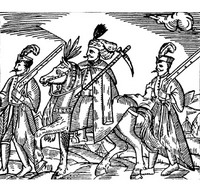 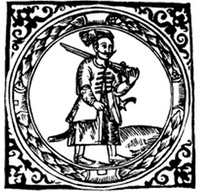 Coat of arms of Zaporizhia 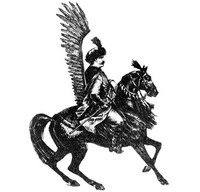 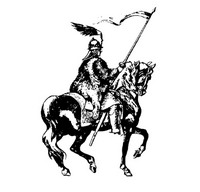 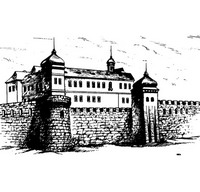 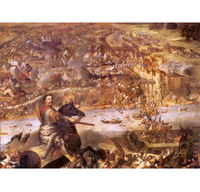 Jan Sobieski in the battle of Khotin 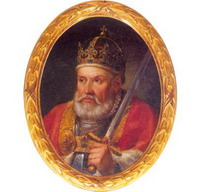 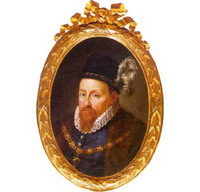 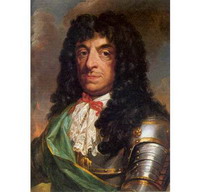 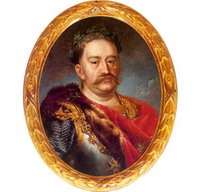 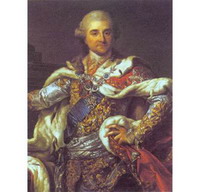 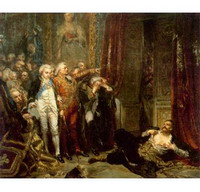 The crisis in the Polish Sejm before the introduction of Russian troops to the country (with pictures of J. Matejko)