For the study themes you find:

The population of any territory or country by engaging in interaction with environment, acts on the one hand the power that creates wealth, on the other - which consumes them. Therefore socio-economic science is very important with the basic knowledge indicators of population size, its geography, structure and dynamics of change. Population studies a number of science - Geography of Population, etnoheohrafiya, demography.

According to statistical data on the territory of living Earth Over 6.8 billion people. The largest population of the world is  China (1.3 billion people), India (1.1 billion), USA (307 million), Indonesia (240 million), Brazil (198 million).

Dynamics of change of the world population was different throughout history  humanity. Since the appearance of man on Earth for many thousands of population growth was negligible, then began to rise and now  again decreases.

The first "population explosion" is on the seventeenth-nineteenth century. When World population reaches through the Industrial Revolution in 1830  by one billion people. In subsequent years the pace of population growth increases conditional on the increase and decrease in fertility mortality in industrialized countries of Europe and North America. After 100 years the Earth's population doubled and amounted to 2 billion people in 30 years (60 years of the twentieth century.) - tripled (3 billion people) and in 1975 - grew to 4 billion people. At the beginning of. multiplicity of the population was over 6 billion people.

The largest growth rate of world population in the history of mankind fall to 60-years of the twentieth century. - The second "population explosion". Through traditionally high birth rate and reducing mortality due to development of medicine and quality of life in Latin America and Asia,  developing an average annual population growth exceeded 3%.

According to the UN by 2025 the world population will reach 8.3 billion people and by the end of the XXI century. stabilized at around 10? 12 billion

Natural movement of population. The population is influenced  Vital (play) - fertility and population processes mortality. Natural movement makes continuous process of change of generations and population recovery. In order to be able to compare the rates of such  play in countries that differ in population,  calculate the average birth and death rates for 1000 persons per year (ppm -% 0). The difference between fertility rates and death called natural growth. Ratio of natural increase  can have positive, negative or zero value, indicating increase, decrease or invariance of the population. 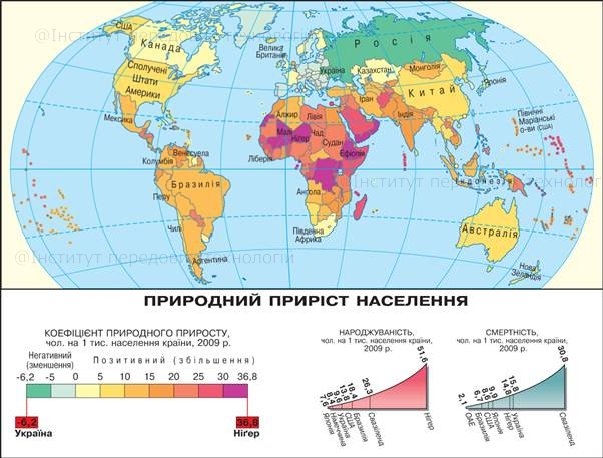 Agrarian society, which characterized by numerous family, which is the main producer of wealth, combined with advances medicine helps significant increase in fertility and population growth - boomers. This play is called population advanced.

Society in the era of post-industrial economy characterized by  welfare, increased cultural development of health  that helps to reduce mortality and increase in expectancy life. Such processes lead to aging. Representation of women in social production and growth costs education and child development help reduce fertility. Natural reduced growth in some countries mortality rates exceed birth, there depopulation - The natural population decline. This type of reproduction is called diminished.

In the modern world the level of socio-economic development of countries is different, they are at different stages of demographic transition and dissimilar demographics.

According to today Historically Two types of population reproduction (Processes of generations).

For the first type of reproduction (On the theory demographic transition are appropriate and easy and narrowed type reproduction) characterized by low fertility rates and mortality significant life, each family usually one or two children. He typical of developed countries.

The second type of reproduction characteristic of countries developing countries. Typical for it are high fertility rates (25-40 ‰), mortality (7-14 ‰), low life expectancy (on the theory demographic transition it corresponds to extended reproduction).

For the implications on the reproduction of state may conduct demographic policy - A system of administrative, economic, propaganda activities aimed at changing the birth rate in the desired direction.

Most of the second type of play engaged in policy containment and reduction of child birth (up to 5 years) mortality.  In many countries, legislation increasing the age of marriage, promote the benefits maloditnoyi family. This seven pits state provides a number of benefits.

The greatest successes in this policy have made China and India. In China population policy has a motto: "One family - one child", "Chinese - people without siblings. The country has established State Committee family planning, set higher age limits for entry into marriage. Thus, the limit for women 22 years for men - 24. Odnoditni family using a number of benefits: allowance, free medical care, access to education. In India has a slogan: "We are two - we two."

However, not all developing countries, conduct demographic policy. Muslim countries do not interfere with natural processes Reproduction, guided by religious morality, and Africa - due to lack of material means.

Most other problems in developed countries. Fertility in these generally low, and therefore the population is growing slowly.  There is a problem of scarcity of human resources. In connection with this country pursue policies aimed at increasing the birth rate: single Payment Suite, government assistance at birth, monthly payments for children, benefits, loans for large families and more.