§ 8. Placement of the world's population and its territorial organization. (textbook)

§ 8. Placement of the world's population and its territorial organization.

Population distribution - The result of spatial distribution of the population in the world in a certain historical period.  World population is very unevenly placed, because humanity has long concentrated in areas with favorable for farming conditions. Because almost 70% of the world's population is only 7% of the land. About 15% of the land have no permanent population. It areas that are characterized by extreme natural conditions - different types of deserts, forests, highlands, mainland Antarctica. 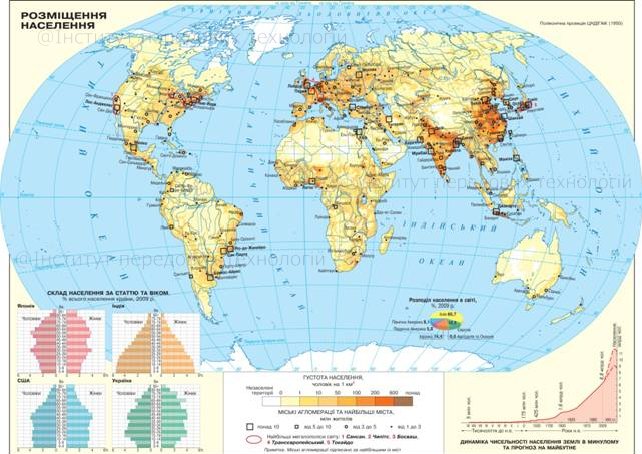 On the other hand half of the inhabited land is population density about 5 osib/km2, and Greenland, which belongs of Denmark, 1 person accounted for 35 km2.

Resettlement of the Population - The process of redistributing the population in a particular area, resulting in net settlements there.

For each epoch according to the level of economic development characteristic features of their resettlement. At the dawn of human development settlement was dispersed, sometimes - nomadic. Rural Studies economy contributed settled, a network of settlements - rural and urban, with significant predominance of rural population. 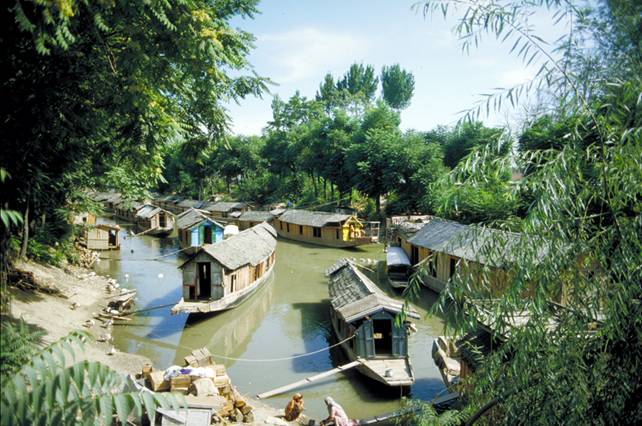 In the industrial and postindustrial society dominated by urban population. It should be gradually erased the differences between rural and urban due to the spread of urban lifestyle in the countryside - rurbanizatsiyi.

At the moment there are two main forms of resettlement of the population - rural and urban.In the cities lived 47% of the Earth and this share is growing. The historical process of increasing the role of cities in society, widespread spread of urban lifestyles and urban culture called urbanization.  In the narrow sense of urbanization - is the increase in cities, especially large, increasing the number of residents in a particular area. Main indicators of urbanization - the pace, level, form. Rate of urbanization shows the speed of this process in the world as a whole and its individual parts, and level of urbanization - The proportion of people living in cities. 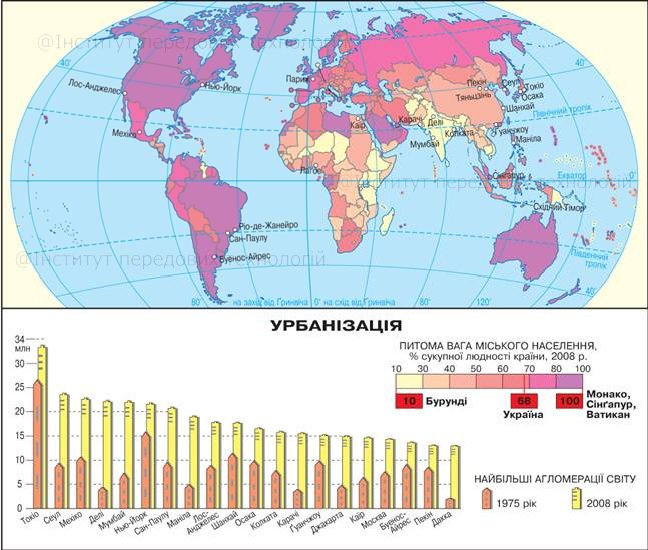 In many urban areas all over the world can be divided into two groups: with the number above and far below the world average index. In Europe, Latin America, United States, Canada, Australia and Oceania urban population is? population, and in Asia and Africa -  1 / 3. In general, higher proportion of urban population is typical for developed countries and countries where natural conditions are not conducive to conducting Agriculture (Singapore - 100% Belgium - 97%, Kuwait - 97 %, Iceland - 92%, Israel - 92%, Uruguay - 91%, UK - 91  %, Netherlands - 89%, Argentina - 89%, Germany - 88%, Libya - 88 %).

The lowest proportion of urban population typical of the poorest countries Africa and Asia with the agricultural economy (Bhutan, Rwanda - 6%, Burundi -  8%, Nepal - 10%, Uganda - 13%).

The main form of urbanization is city. City - settlement, which screened in accordance with the law of the State to category of cities with certain populations that perform specific functions - administrative and political, industrial, transportation, cultural. 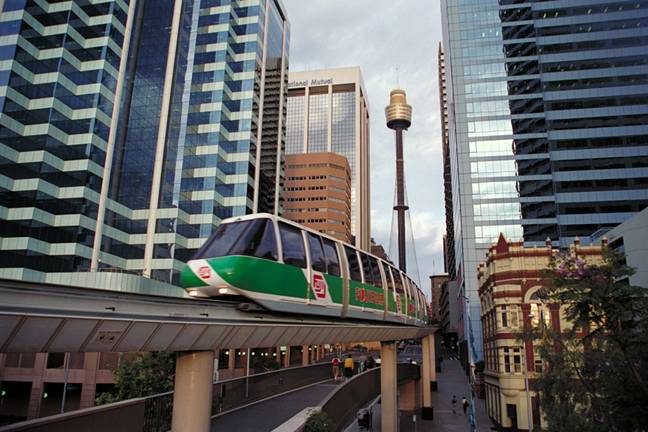 In urbanization of traditionally allocated three "waves":  Middle Ages (XIV-XV cent.) Nineteenth century. (Epoch of the Industrial Revolution) and second half of the twentieth century. Each of the waves associated with qualitative changes in Economics: development of manufactory and trade, industry, non-production sphere.

For typical modern urbanization hiperurbanizatsiya,  concentration of population in large cities with populations over 1 million people. Most major cities in China (50) USA (45), India (23), Brazil (16), Russia (13). These same countries are the leaders in number urban population. In the world there are also 23 supermista "with population exceeding 10 million people, most of which are  in developing countries.

For contemporary urbanization is characterized as the growth of suburbs - suburbanizatsiyaThat leads to formation urban agglomerations.

As a result of merger agglomeration form megapolises or megalopolis (From the Greek. Megalu - big and polis - city) - solid strip of urban settlement.

In the United States emit megalopolis in which live more than 1 / 2 people country: Pryatlantychnyy, or your boss, "(Boston - Washington DC) - 60 million persons, lakeside, or Chipitts "(Chicago - Detroit - Pittsburgh) - 40 million persons; California, or "San San" (San Francisco - San Diego) - 25 million people; Shidnoflorydskyy (Miami - West Palm Beach) and Prymeksykanskyy (Houston - New Orleans). The last two are in the megalopolis formative stage, the number of inhabitants in them is about 10 million persons. In Japan, the megalopolis formed Tokkay (Tokyo - Nagoya - Osaka) with population over 55 million people (about half the population is country). 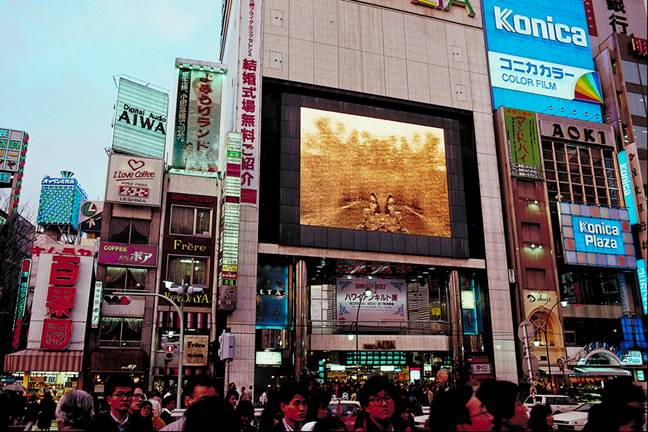 Record number of people became European megalopolis - about 100 million people, or almost 1 / 4 the population of Europe (excluding CIS). European megalopolis - is a giant cluster of cities and urban agglomerations are located in many countries. It originates in Manchester (UK) and ends in Milan (Italy). Between these cities he passes through London and Birmingham (UK) Ranstad agglomeration (Amsterdam - The Hague - Rotterdam) in the Netherlands, Brussels in Belgium, the agglomeration of Lille - Roubaix - Turken and Paris in France  Ruhr area, Cologne, Frankfurt am Main and Mannheim in Germany, Basel and Zurich in Switzerland. After a form (at first he stretches from northwest to southeast, then turns southwest) was named the "European banana".

For many developing countries, characterized false urbanization (Pseudo  urbanization), when the increase in urban population accompanied by a proliferation of urban lifestyle and culture, and formed urban slumsWithout adequate improvement.

Despite the urbanization of the Earth, about half the residents live in rural settlements.  Particularly high proportion of rural population in Asia - 65%, Africa - 70 %. In China and India, the share of rural population is respectively 70 and 73%. Leads in this tropical country index Africa (Rwanda, Burundi, Uganda) and South Asia (Bhutan, Nepal). 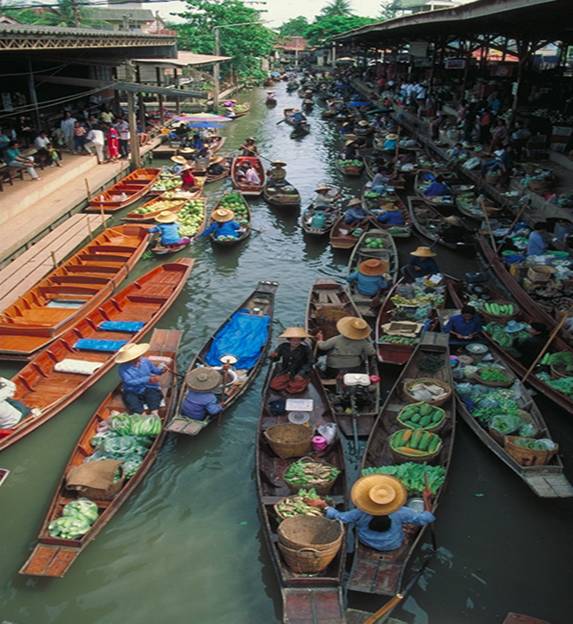 Depending on natural conditions and historical traditions of the country produce group (rural) and dispersed or scattered (Hamlet, farm), form the settlement.

A generic form settlement prevails in Europe, Japan, China, in most developing countries.

For areas with arid climate and mountainous areas (North  Africa, the northern part of West Africa, South West and Central  Asia) is typical nomadic form of resettlement. The number of nomads in the world is 25-30 million people.

Migration processes in the world under influence of various factors. With this in mind distinguish several groups of migration.

By Area emit external migration (Crossing national borders), which share the emigration (exit from the country) and Immigration (Entrance) and internal (Within the country). Number of foreign workers up to several tens of millions a year. 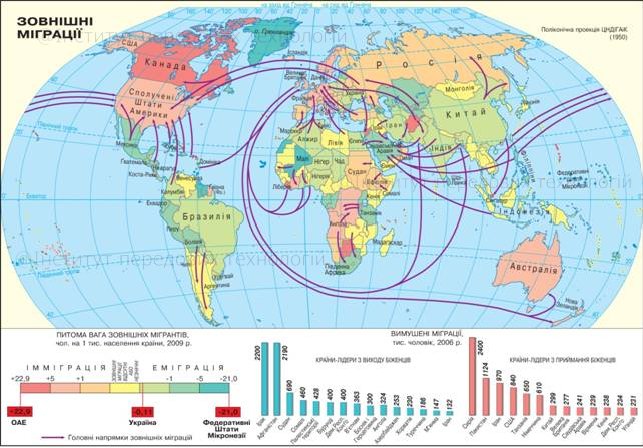 By way of today is dominated by voluntary migrationBut numerous examples are known forcedIncluding removal of blacks slaves from Africa to America. By way of them can be divided into organizedUndertaken with government and NGOs for their organizational and economic support and unorganized - At the expense of the migrants directly without financial and logistical support to the party. 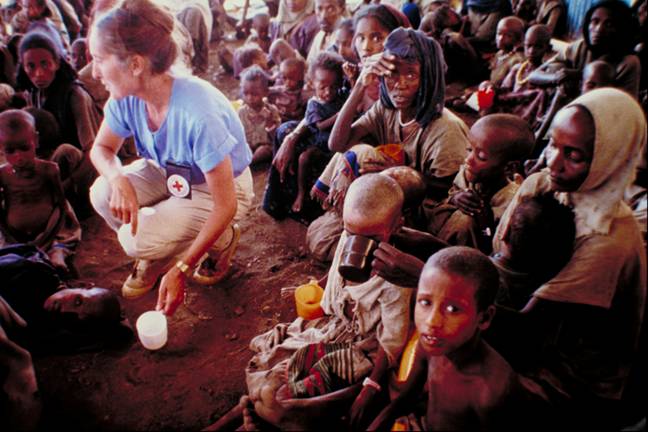 Reasons (motives) moving to a new residence can be varied. The most massive of them - socio-economicThat express the human desire to find any paid job or

It is moving from developing countries with significant human resources, developed countries move leading scientists, the intellectual elite to the U.S., Japan, Germany - "brain drain". Emigrants of 23% among Members of the National Academy of Sciences of the USA and 33% among the winners Nobel Prize, who represented the United States.

Political migration following the collapse of states, repression, persecution, they can be combined with war - Refugees are leaving the place of military action. Often causes find new habitats are religiousconflicts such as between India and Pakistan, Bangladesh, Israel and Palestine. Sometimes representatives of certain nationalities migrated (national migration)  through the repatriation process, the formation of a new national population States, for example, Israel and others. Often the causes of migration are unification or disintegration of the family - domestic household migration.

One of the most important characteristics is duration of migration. Over a period of migration to share permanent and temporary. Temporary migration due to work-people. There are three types of temporary migration: seasonal (Related to agricultural activities - harvesting, cattle races to new pastures), crew (Related to the extraction of natural resources in poor areas for permanent residence) Pendulum (Common in areas, while suburbs in the morning with people coming to work and coming home at night).

Statistically, at the beginning of. in the world, there were 25 million refugees, including 3 / 4 was on the countries of Asia and Africa and developing countries.

The nature of the influence of migration on the demographic situation and labor depends on both quantitative and qualitative composition immigrants (highly skilled workers, scientists, or forced migrants, refugees, deported, the host, which are derived from other countries).

They have a positive and negative effects of demographic processes. As a result, migration can change sex, age of population, appear legal and socio-economic problems, specific  conflicts between groups of the population - religious, ethnic.