FUNCTIONAL Distribution. At the beginning of. world faces a single socio-economic organism, the functioning of which requires concerted action Governments, the public, businesses in different countries. The days when relations between states were resolved by force, gradually becoming the past. Understanding through an agreement mutually beneficial search options solving problems - the civilized methods of interstate communication. For coordination of the international community, resolve disputes, fight with global and regional issues created a series of international organizations. International Organization - an association of three or more governments, intergovernmental or public communities to address certain common issues or implementation projects. The work of international organizations participating authorized messengers, representing their country or community, prytrymuyuchys respect non-interference in internal affairs, decision making and international law.

For the subject of distinguish the general political and special (economic, scientific-technical, credit and financial, military, on development, etc..) international organizations. They have Setup an international agreement, a permanent body and headquarters. 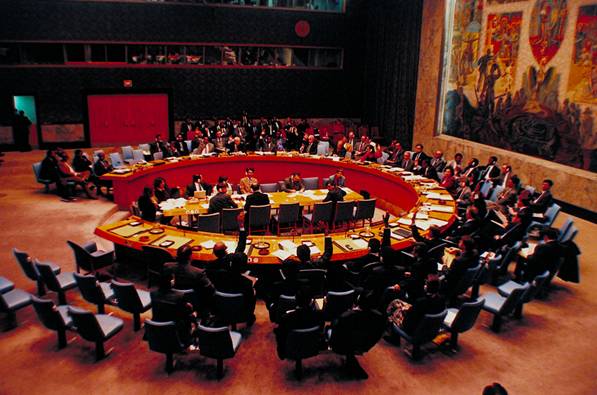 During the meeting of the UN Security Council 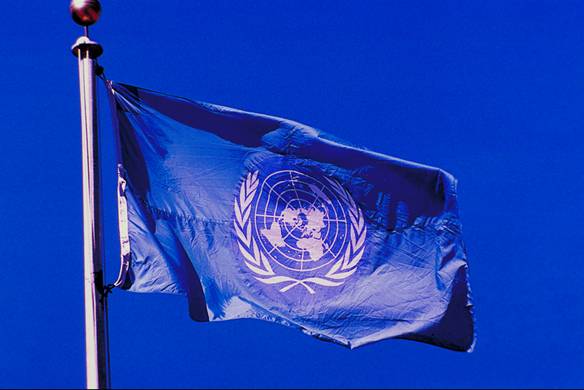 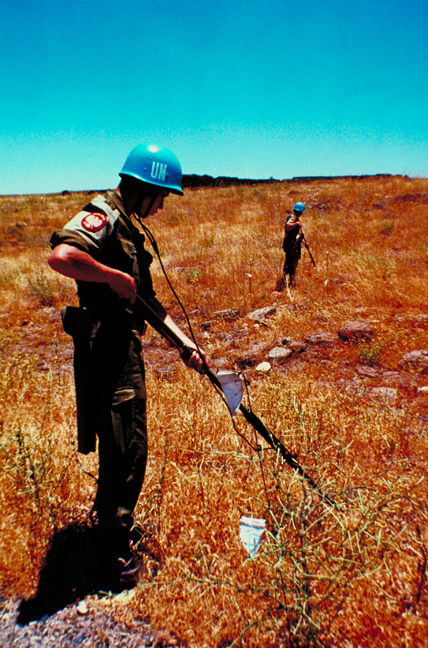 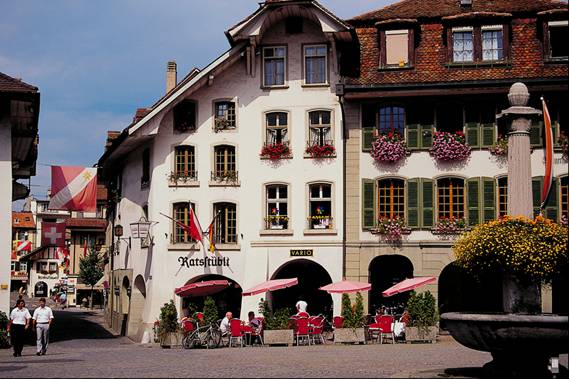 Among them one of the most influential was UNESCO - A specialized division of the UN Educational, Scientific and culture. The purpose of this intergovernmental organization is to promote peace and strengthen international security through development cooperation between States in humanitarian sphere. UNESCO brings together 188 countries. One of the directions of its activity is the protection of world cultural and natural heritage and its use for the purposes international tourism. World Heritage List, compiled under the auspices UNESCO, consists of 890 objects (as of 2009). With numerous attractions Ukraine included in it Kiev-Pechersk Lavra and St. Sofia Cathedral in Kiev, the historic city center, ancient beech forests of Ukrainian Carpathians, Ukrainian part of the geodesic arc Struve.

Food and Agriculture Organization (FAO) The UN was created to improve the quality nutrition and productivity in agriculture, improvement of living conditions rural population, promoting global economic growth. FAO sharing its experience in the field of agricultural policy, planning, preparation of legislation and creation national development strategies and to overcome malnutrition and hunger. For implementation of local projects FAO provides technical and limited financial assistance received from developed countries and banks.

World Trade Organization (WTO) - International associations cares about the rules of trade between the countries concerned, the trade exchanges occur easily, predictably and freely, and regulate trade disputes. This organization brings together over 150 members, which carry 97% of world trade turnover. Ukraine - Member of the WTO in 2008

World Health Organization (WHO) - Company specialized UN whose main objective is to promote the health of people around the world. This organization coordinates the international cooperation for development and improvement health systems, eradication of infectious diseases, the introduction general immunization, the proliferation AIDS, Epidemic and Pandemic, The coordination of pharmaceutical activity. WHO Foundation Day - 7 April (1948) - celebrated annually as World Health Day. The structure consists of 193 WHO countries. UkraineWHO is a member since 1948 (As an independent country resumed membership in 1992).

The name of "United Nations" was proposed President Franklin D. Roosevelt. It was first used in 1942 in the Declaration, when, during World War II, representatives of 26 States undertaken on behalf of their governments to continue to fight against countries fascist coalition (Germany, Italy, Japan). 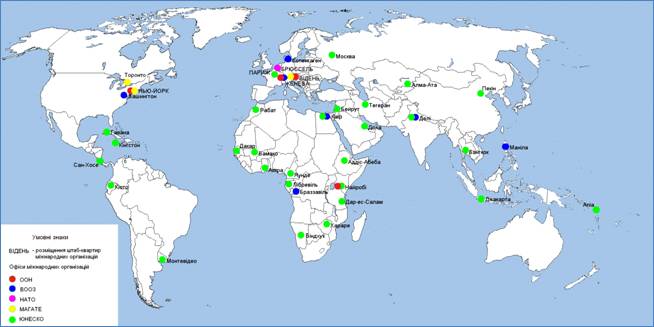 History European Parliament associated with European integration process that began back in 1950-1970 the In the past, this association had consultative status and controlling authority in solving common problems of Member States. Now the of the European Parliament included representatives of 27 European countries that are EU members (Table 6), and it occupies a leading place among the institutions established under EU. Elaborating principles of equality is a member of issues, freedom, security, solidarity and lasting peace in the territory of the EU.

Commonwealth of Independent States (CIS) formed in 1991 as economic, political and economic union Belarus, Russia and Ukraine. That same year, joined the CIS eight former Soviet Union: Armenia, Azerbaijan, Kazakhstan, Kyrgyzstan, Moldova, Tajikistan, Turkmenistan, Uzbekistan, And in 1993 - Georgia. In 2005, the CIS out Turkmenistan. Ukraine - founder organization, but did not approve of the CIS Charter, because it is not formally a member and observer. In 2008, Georgian parliament decided to terminate membership in the CIS, but so far that this country remains a member of the Commonwealth.

SPECIAL ORGANIZATION. European Union (EU) - Political and economic integration association of 27 countries in Europe,  formed in 1993 (Table 4). EU combines the features of international organizations and States but not formally or by any other. The EU countries have come a long integration way: from the signing in 1951 Treaty establishing the European Coal and Steel Community, the Treaty of Lisbon in 2007 about reform of the EU. He plays a huge role in international relations. Countries The EU pledged to implement a common foreign policy, coordinate major for the economic, environmental and social policies. 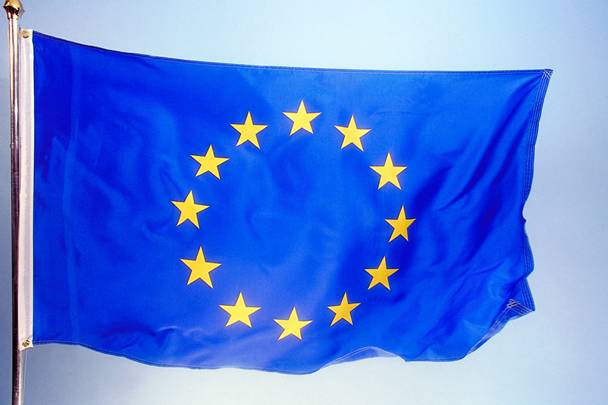 The North Atlantic Treaty Organization (NATO or the North Atlantic Alliance). NATO - mizhnarodna military-political organization established in 1949 Now in its structure It consists of 28 states (Table 5). This organization aims to join in the future and Ukraine. The basic principle of organization is a collective defense system - community-based actions of all its members, if threatened from outside. Now NATO - one of the leading components safety worldwide. 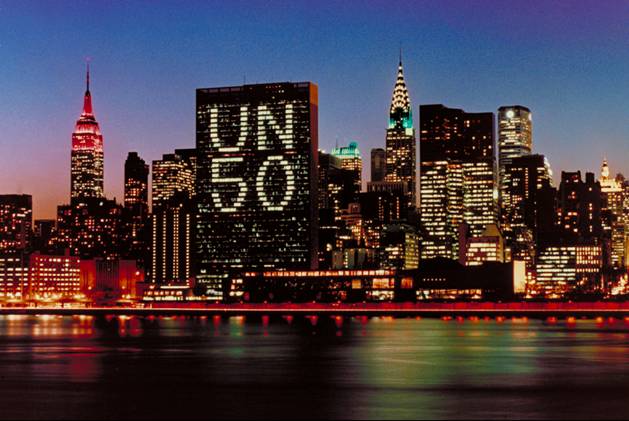 MAIN UKRAINE vector of foreign policy. In its foreign policy of Ukraine is of national economic and geopolitical interests. It aims to create a multi-vector system cooperation that would ensure its political, economic and energy safety by increasing international contacts.

Proved a strategic perspective to the entry of our country European economic and defense structures. For Ukraine, the European integration, the ultimate goal is EU membership - a path of modernization economy, attracting foreign investment and advanced technology, more competitiveness of national producers' access to markets European countries. Movement to promote closer European countries with high standards and raising living standards and welfare. European integration ensures strengthening national security and political democratization system, but a complicated and lengthy process. Important steps towards accession our country to the EU: WTO Membership, which includes changes in Ukrainian legislation with the standards of market economies, free trade zone between Ukraine and the EU, bringing in compliance with European standards of statistics, tax, pension, insurance, medical, educational and other systems, political and military-political joining the Euro-Atlantic structures.

However, our country has a wide range of interests and elsewhere. Yes, Ukraine is an active participant Black Sea Economic Cooperation (BSEC) - An international organization which emerged in 1992 Its membership includes 11 of the Black Sea basin (Albania, Armenia, Georgia, Greece, Moldova, Turkey, Bulgaria, Romania, Russia, Ukraine). BSEC aims to turn Black a zone of peace, freedom, economic stability, friendly and neighborly relations. Due to its location, this region could transregional integration groupings, which combines Europe, Asia and North Africa. Ukraine it can turn its advantages geographical position of real political and economic leverage. But through its own foreign policy indecision and uncertainty of position is not only loses the opportunity to occupy an important place in the region, but also risks to be excluded from this process.

Ukraine was one of the initiators of the GUAM- Union integration Georgia, Ukraine, Azerbaijan and Moldova. He has intended to implement political and economic (primarily energy) projects jointly solve the problem of territorial integrity of member states. The basis of economic cooperation are functioning free trade zone and projects to transport Caspian oil to Europe.

On the political and socio-economic processes in post-Soviet Russia exercises a strong influence. Trying to preserve and restore its geopolitical role of world and regional leader, it initiated a Common Economic Space (CES), which should include Russia, Belarus, Kazakhstan and Ukraine. Upon admission, Our government tries to take into account possible  national economic interests and requirements of WTO. Ukraine, once again for their history, has a unique chance to take advantage of its geopolitical position and a connecting link, able to defend their economic interests and at the same time ensure the stability of not only neighboring countries but also across Europe.

Heading for the European Union, Ukraine has become regional integration generator of ideas, one of the leaders of the benefits mutually beneficial development. No response to this challenge globalized world, our country is doomed or tuptsyuvaty in place, or become a satellite of its northern neighbor. 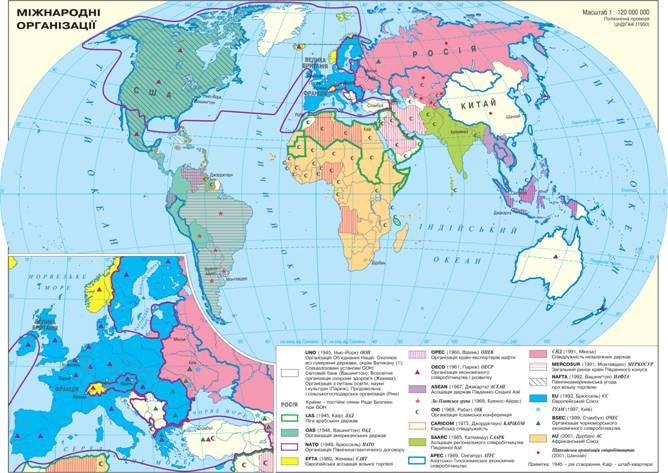 2.    Indicate where the mainland is no headquarters and offices international organizations. Consider why. 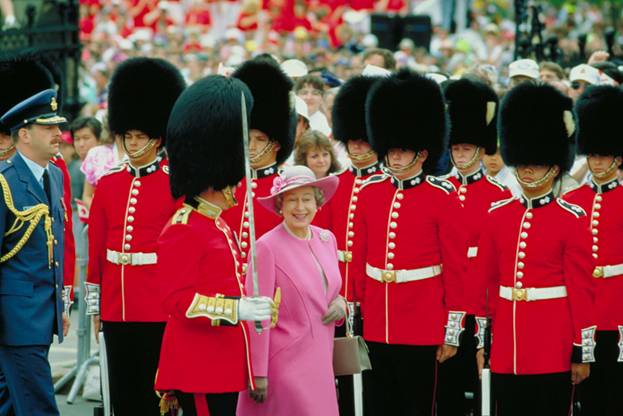 How to share the international organization  of the subject?

2.    Tell about the structure of the UN. What are the specialized organizations of its member?

3.    Name general political international organizations. What are the functions they perform?

4.    Growing geopolitical significance is attached Black Sea region. Ukraine has all chances to become a regional leader. However, problems such as loss of control over the Black Sea Fleet and impotence political game against Russia in the Crimea, problems with the operation of the Odessa oil terminal and pipeline Odessa - Brody difficulties in building the Danube waterway and others, reducing its potential opportunities. Consider that the geopolitical advantages of our country and which specific policy measures it has taken to become a strong player in Black Sea scene.

Collectively discuss the problem:"Prospects for Ukraine to join NATO. Choose a group of experts and rozdilitsya groups that would reasonably defended opposing views: a) the benefits of accession; b) the negative consequences of membership. Use the additional sources information.

Using different sources of information, prepare an abstract or a presentation on (at choice).