President: President elected by the Federal Assembly for a term of 5 years

Administrative structure16 federal states (with their government, parliament and constitution) 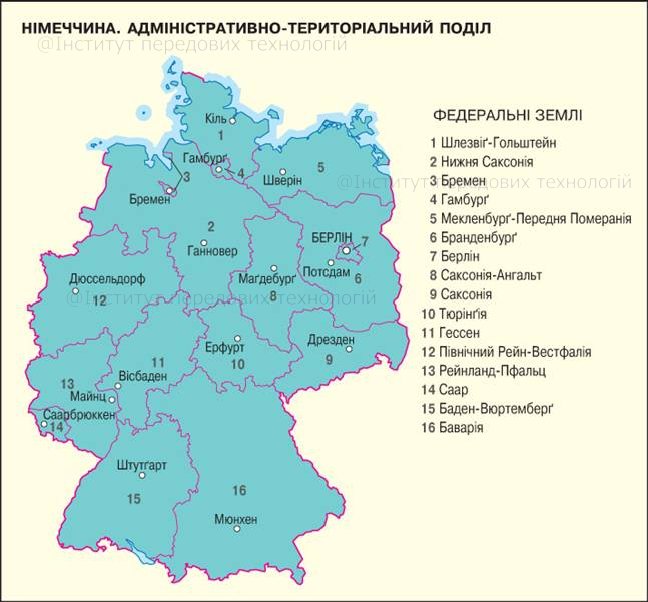 EGP and natural resources potential. Germany - a rich, economically developed state in Central Europe. Bordering the Baltic and the North  Sea, bordered to the east of Poland in the south - with Denmark, in the west - Belgium, Netherlands, Luxembourg, on the south - France Switzerland, Austria, Czech Republic. Strait North Sea separates it from Sweden.

By the nature of the surface of the country can be divided into Pvinichnonimetsku lowlands, mountains and Serednonimetski Southern Germany. In the south are spurs of the Alps from the top of Zugspitze (2968 m). North line of average Rhine Shales mountain ranges Thuringian Wood, the legendary mountain of the Harz Brokken (1142 m), Teutoburg Wood Ore Mountains. In the north is the North lowland hills  and lakes. To the south is Lake Constance. The largest river Rhine tributaries of the Main, Mosel, Ems, Weser, Elbe, Oder, Danube. Channels linking separate river systems, the most important of them - Dortmund-Ems, Canal Rhine-Elbe and Rhine-Main Canal-Danube. The climate is transitional from maritime to continental, temperate, cool and cloudy with wet winters and summers.

Almost all the territory of Germany situated in the zone of deciduous forests, but today only one third of the territory occupied by forests, which consisting of birch, oak, beech, spruce, pine. The main mineral Natural resources: coal, lignite, small reserves of oil, natural gas, iron, copper, nickel, uranium ore, potash, salt. Has sufficient number of processed timber and land. Overall geographical conditions of the country can be considered quite satisfactory for development of their agriculture and economy.

Population. More than 95% of the population is Germans, but also living Italians, Poles, Greeks, Czechs, Croats, Slovaks, Turks. The average population density in the country is large enough - 230.8 people. per km2. Most of them are Catholics (mainly living in southern lands), about 40% - Lutherans (the north). Except Then there are Muslims, Baptists, Jews. Cultural autonomy is the only a small Slavic minority - Lusatian Serbs. Almost 90% of the population living in cities and surrounding urban areas that a high level of accomplishment. Average life expectancy men - 76 women - 79 years.

Like other European countries, Germany had a large population losses during World War II, but a successful process of "repatriation" ethnic Germans as well as immigration economically active population Turkey, Italy, Greece allowed to quickly restore the number of population.

The government initiated economic reform measures, among them - gradually increase the mandatory retirement age from 65 to 67 years. The government of the country was forced to resort to this step because the overall aging process population. In areas of the economy zanyatist workforce in the country follows: agriculture - 2.4%, industry - 29.7%, field services - 67.8%.

Cities West Germany have a long (more than 2000 years) history, because  They were founded in times of Roman Empire (Cologne - 37 g. BC, Aachen - and art. BC). Average German town - a small and quiet, with  colorful "gingerbread" houses and clean streets. In each They keep their own culture, but nationwide, celebrated local land holiday, held festivals, carnivals. Although Germany - an advanced industrial country and business, here a little cities with skyscrapers and noisy street.

There are no clearly expressed economic and political center. Rhine-Ruhr area with its major cities Dusseldorf, Cologne, Dortmund, Essen, Duisburgis the main industrial core of the country. Major financial centers and one of the largest banking centers in Europe is Frankfurt am Main. There are over 420 German and international financial companies and banks, in 1998 he placed the European Central bank.

In 1700, the city was founded Prussian Academy of Sciences with Leibniz, and in 1810 - Humboldt University.

After the formation of the German Democratic Republic East Berlin was  declared its capital (1949). Economic problems and political instability after the death of Stalin brought in mid-June 1953 to  sharp worsening political crisis, there was a final split of the city. For the first time in 1952 the GDR authorities had taken stringent measures: closed streets of East Berlin in the West, disconnected phone lines, barred for residents of West Berlin to enter the territory  GDR. After closing the borders of Berlin remained the only city where you can almost freely move to the west. What's happened is not little precedent in history - a radical separation of the huge city population of over 3 million people and total isolation of one part of another. August 13, 1961 along the borders between sectors have been built Berlin Wall. It was finally dismantled in January 1990, and Berlin  returned a status of official capital of Germany.

Here are the commodity exchanges of coffee, sugar, rubber. In 1558 founded one of the oldest in Europe Hamburg Stock Exchange. There University, Higher School of Music and Fine Arts. Hamburg - city

In Hamburg, about 120 parks, including the world's largest Park Cemetery Olsdorferfridhof. To the north of the old city There is an artificial lake Alster, around which laid semykilometrova "Path of Health".

Economy. Germany is a highly developed country that by volume of commodity production is second only to Japan and the USA. GDP by sector is divided as follows: agriculture economy gives 0.9%, industry - 30.1%, services - 69%. On capita in 2008 it was $ 34,800.

After unification in 1990 Germany and East Germany became a country with greatest economic potential in Europe. The unification of Germany gave new opportunities for economic development.

High state's role in the economy was typical for Germany in all times. The model of social market economy is a compromise between economic growth and equitable distribution of wealth. "Rhine capitalism "- feature of economic development. He characterized by the role of banks in the economy. High  social security led to the fact that 40% of net profit of German companies goes for salaries, contributions to social funds. Of 100 euro net wage on average contributions to social funds goes 81 euros.

Since 2003 Germany has become a leading exporter of the world, squeezing even the U.S.. The phenomenon of "nadindustrializatsiyi" typical of modern powerful  German economy. This means that the share of industry in the production GDP is large enough in comparison with many other developed countries  world. Only Japan, Ireland and Portugal are more industrialized than Germany. It is no coincidence, since specialization Germany in the global economy is the production of industrial products, mainly engineering products. 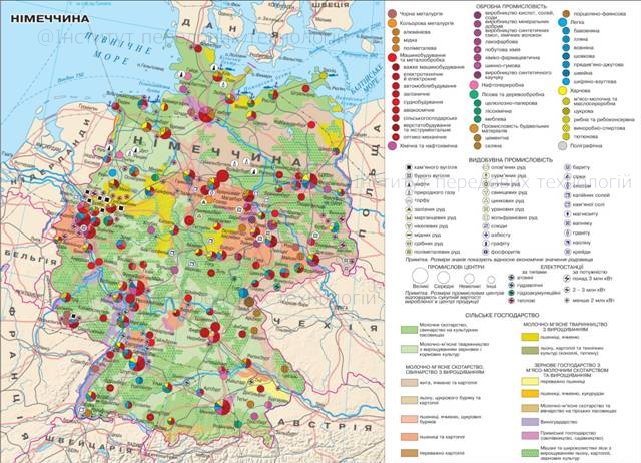 Power operates as a country on its own, and on import energy. Oil refineries to deliver pipeline from Rotterdam, Marseilles, Genoa, through its own ports Rostock, Wilhelmshaven, Bremerhaven, Hamburg. Major Centers oil - Karlsruhe, Inholdshtadt, Emden, Hamburg, Bremen. Gas country receives from the transit pipelines through Russia and the Netherlands with offshore Norway.

In the Ruhr, Aachen and Saarskomu mined stone basins coal, lignite - near Cologne, Leipzig, Halle and Cottbus. 85% mined brown coal used for power in Germany. Thermal power is concentrated in areas of mining of brown coal. On export, it only comes in the form of briquettes.

Electricity countries represented all major types of power plants, which are dominated by nuclear power, giving More than a third of electricity. 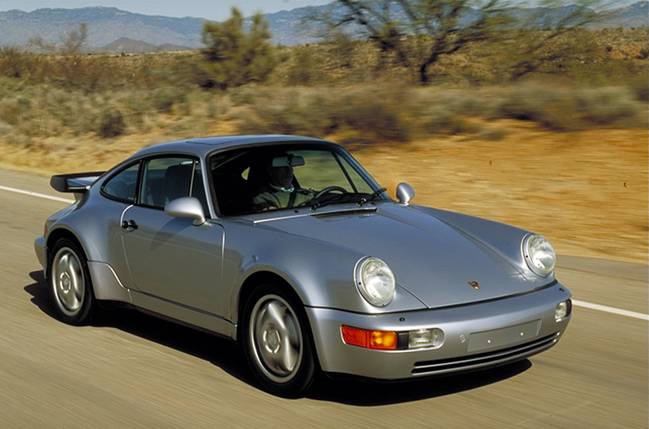 PORSCHE - a business card with the German car industry 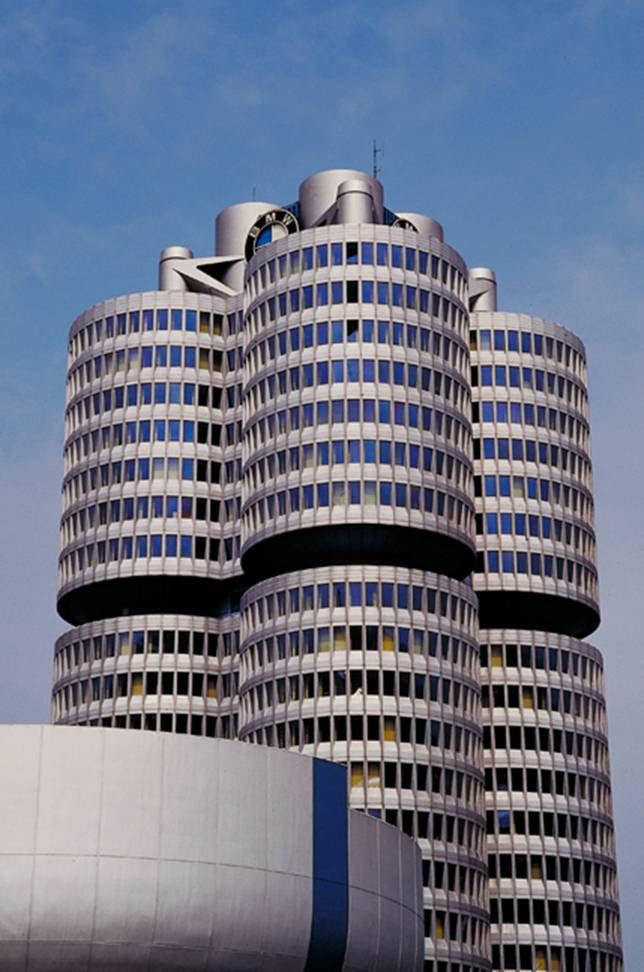 Heavy machinery is concentrated in Duisburg, Essen, Chemnitz, Augsburg, Frankfurt an der Oder. Equipment for printing industry produced in Heidelberg, Plauen, Chemnitz. Germany is one of the leading places in the world to build ships (1st  - In Europe and the third - in the world). All over the world wide popularity uses the German electrical industry ("Siemens", "Bosch").

Dozens of beers exported to other European countries. The volume beer production, export and consumption of its products Germany ranks first in Europe and worldwide second only to USA.

In 80 of the last century in Germany there were parks, now they over 20. The largest of these, which includes more than 200 firms specializing in microelectronics - "Isar Valley" - created on the basis University of Munich.

Recently, more and more industries are dependent on Germany imports of raw materials, intermediate products and fuels, but they are distinguished high productivity, which is one of the largest in the world. In terms  Germany living standards among the highest in the world.

The fate of Germany in world GDP is about 8%, and the European  - About a third. Agriculture. After combining the two Germanies country became largest agricultural producer in Europe, but high intensity  Agriculture covers the needs of the population and industry country no more than 80%.

Plant products are grains: wheat, rye, oats, rape; Industrial crops: sugar beets, tobacco, potatoes. Germany sets high yield of wheat - up to 70 kg / ha. Grow vegetables and fruits, especially apples, barley and hops for beer production. The country is known their viticulture and winemaking, which is the biggest development came in valleys of the rivers Rhine and Moselle (the famous Rhine wines and mozelski). Transportation. Dense and well-organized transportation network provides high development of the economy. Important role as waterways played by rivers and canals system

Works 550 airports with paved runway, most of them - in Berlin, Frankfurt am Main, Hannover, Hamburg, Cologne, Munich, Bremen, Stuttgart.

Wide development took urban transport. It was in Germany in 1881 opened the world's first tram line, and in 1931 completed the first television broadcast. Internet users is 42.5 million inhabitants country.

Important role in the economy is international tourism. Greatest got popular resort cities such as Baden-Baden (the main center tourism in the Black Forest mountains), Vysbaden, Bayrot, Aachen. Numerical quantity museums, monuments of nature, history and architecture of ancient German Cities in Germany attracts tourists from around the world and the Germans are very love to travel. 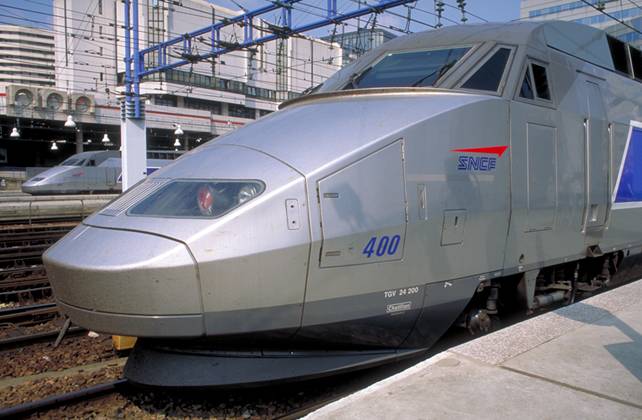