Legislature: Bicameral parliament (House of Commons and House of Lords) 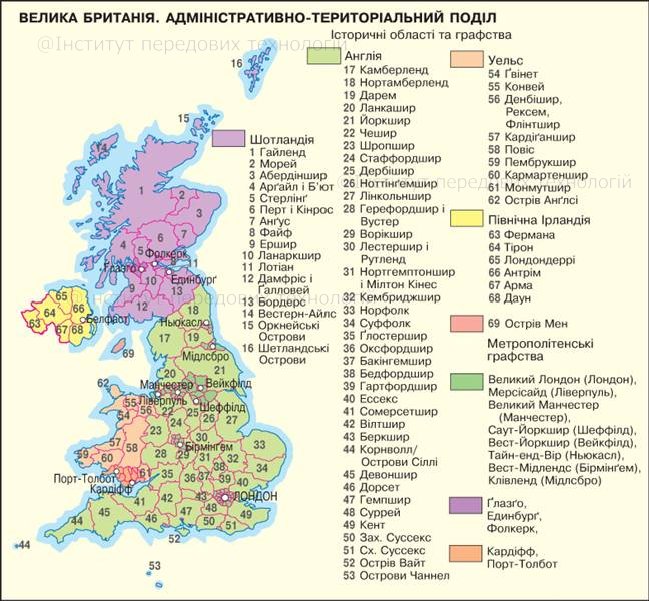 EGP and natural resources potential. Great Britain  - A state in northwest Europe, located in the British islands washed by the Atlantic Ocean and its seas - North and Irish, channels Channel, Pas de Calais separated from Europe, North and St. George - the island of Ireland. The nearest neighbor countries are France and Belgium. Insularity contributed to the fact that during the existence of the state in nearly nine and a half  centuries, she did not know a foreign invasion, but she participated in Broad military campaigns in Europe and beyond.  The coastline is dissected by bays, fjords and estuaries, forms large peninsulas: Wales and Cornwall with plenty of convenient bays  which contributed to the growth of the country as a great sea power. Scotland and Northern England, the so-called High UK - Highlands (Pivnichnoshotlandske Highlands, Uplands Pivdennoshotlandska, Penninski and the Cambrian Mountains). In the south and southeast Britain Low (London Basin) - hilly plains, typical landscape of "good old England ".

Temperate oceanic, humid climate of the country was formed under the influence Gulf Stream, mild winter (3-7 ° C) and cool summers (11-17 ° C), the number  rainfall varies from 600-750 mm on the plains to 1000-3000 mm per year in mountains, evenly distributed throughout the year. Climatic conditions contribute to the development of agriculture - growing herbs on pastures, development of biotechnology. Great number of rivers (the largest - Thames, Severn), many of which combine channels - an important factor for the development of the economy. In Scotland and Ireland many lakes (Loch Ness, Loch Lomond, Lough Neagh). The mountains are peat, heather wasteland, traditionally used as pastures. Forests occupy only 9% area (oak, beech, birch). The plains are occupied by arable land, meadows and densely inhabited.

Since minerals are coal, oil, natural gas, zinc, gold, tin, limestone, salt, clay, chalk, gypsum, potash, sand, slate. Deposits has been exhausted, except oil and gas offshore North Sea. Population. About 80% of the population are British, 15% - Scots, Welsh, and Irish kornueltsi, about 5% - immigrants from the Commonwealth. Englishmen are the descendants of Anglo-Saxons and Normans, Scots, Irish, Welsh and kornuoltsi - descendants of the Celts. English only nation arose to XIII - XIV centuries. and in the XVI century. formed zahalnoanhliyska spoken and literary language, which belongs to Germanic group of Indo-European language family.

Most Britons are fans of the Anglican state church, Scots mostly Presbyterians, Irish Catholics generally. Most densely inhabited central and south-eastern England, the least is populated regions of northern Scotland and central Wales. There  high degree of urbanization, urban population in 89.4% of the population. Almost half of them living in large cities with populations over 100 thousand people. In the country emerged from the 8 large konurbatsiy population over 1 million people, which are about one third of the population country. The average population density - 245.5 persons. km2 (2003). 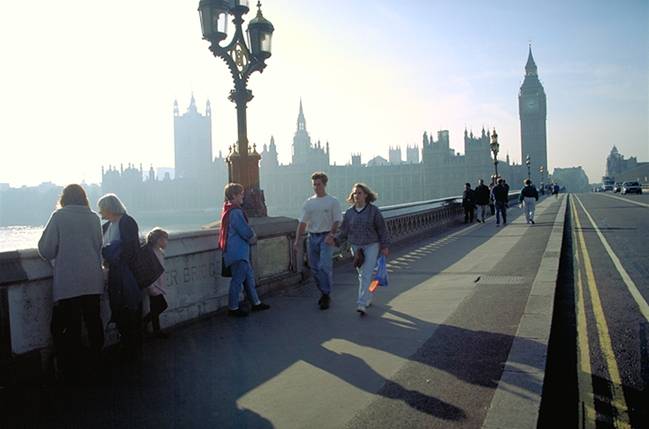 London founded by the Romans in 43 AD in town Celtic settlement on the northern bank of the River Thames. Conurbation Greater London forms a special administrative unit - metropolitenske county, consisting of City and 32 districts. At the end of 40-ies around the Greater London launched construction of eight new towns, the so-called London ring. To prevent further expansion of Greater London, around created a "green belt" prohibited any construction.

A large industrial center and transportation hub. The city operates 11 major railways, 15 radial and 3 ring motorway, Europe's largest and one of the world's largest international airport Heathrow area of 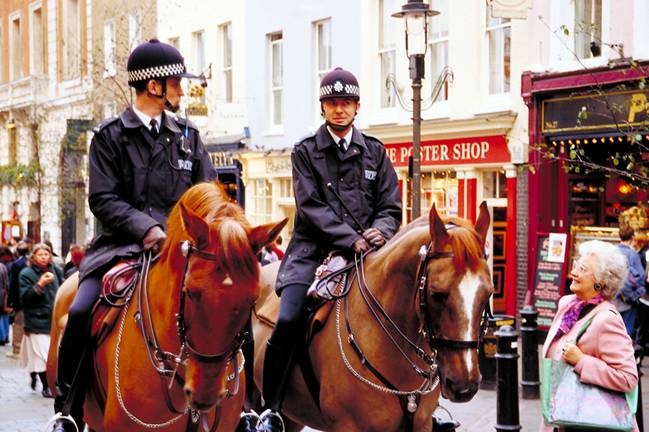 Horse patrol police on the streets of London

Birmingham, the second largest city in Britain, more than a third of its population are immigrants from its former colonies and their descendants.

The first city mentioned in the "Book of Judgement" (1086) from the XIII century. town became popular because of fairs. In the XVI century. here established production of steel products from the XVI century. began to forge weapons for soldiers  Parliament. The invention of the steam engine and the beginning of the Industrial Revolution made Birmingham the center of the industry began an intensive inflow population of the territories of the colonies.

The oldest buildings are the town hall, built in 1830 and Town Hall - in 1870. On the outskirts of Birmingham - botanical gardens greenhouses.

UK economy - one of the four most developed economies of Europe. Over the past 20 years, there was held the following transformation: cut the public sector, reduced tax rates on individuals and legal entities held deregulation and de-industrialization  Economics (with simultaneous decrease in government spending). In terms of GDP  per capita state is top-ranked countries, and is $ 37 400. 3a sectors of the economy's GDP is allocated as follows: Agriculture provides 0.9% of the cost, industry - 22.8%, field services - 76.2%, these figures almost match the employment ratio population in the areas of the economy. 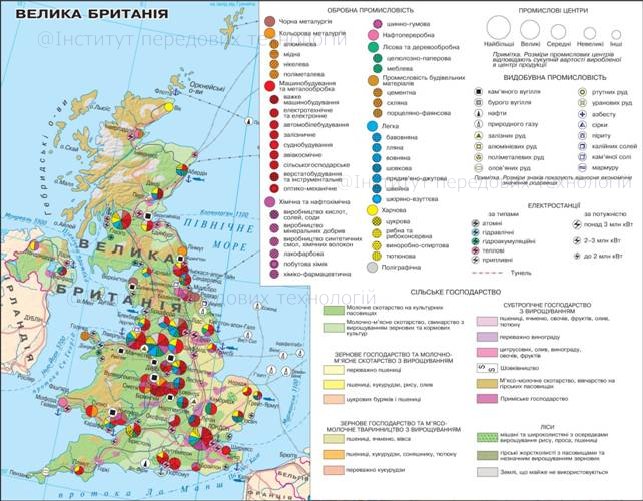 Industry. With reserves of energy resources (oil, gas and coal) United Kingdom ranks first in Europe. In British sector holds about a third of oil and gas extraction  which is offshore North Sea platforms. Oil is more than 124 million tons per year, fixed deposits Brent and Fortis. Exploited gas fields 17, about 89.9 billion m3. Top deposit: Lehman-Benk, Brent, Morck. British-Dutch oil holding in British Petroleum and Royal Datch Shell are among the world leaders in  mining and oil refining. Extraction of coal, which played crucial role in the Industrial Revolution in Britain, constantly reduced.

The development of modern industry of the country determined the level of development high technology. UK is the highest scientific and technical  potential of Europe. The costs of research are more than 2%  GDP per year, over 35% of all research projects funded state. Around Cambridge created Science and Technology Park, producing optics and computer technology, industrial parks and working in Edinburgh, between London and Bristol in the "M-4 Corridor". For part-Tech Industries Great Britain second only to USA.

By the old textile district - Lancashire (main area of

Flavoring industry produces concentrates confectionery and tobacco products, drinks (about one fifth of the world exports of alcoholic beverages, mainly English and Scottish whiskey gin is the UK).

For the industrial countries is characterized by focus on imported raw materials, as in ferrous and nonferrous metallurgy, chemical industry gravitate to the port cities. 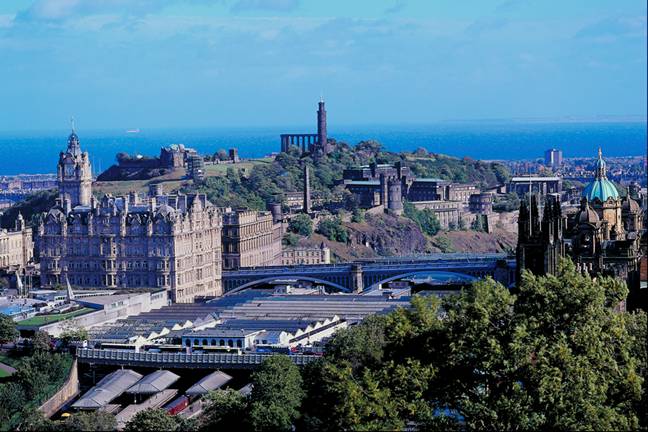 London - The largest tourist center of the world, and in the UK plenty of interesting tourist attractions. In tourism employs 7% of the population, and the annual income from tourism than 8 billion. Much of the GDP and provides education in the world famous schools (colleges) and universities where students go to study virtually  from all European countries and immigrants from Commonwealth nations. 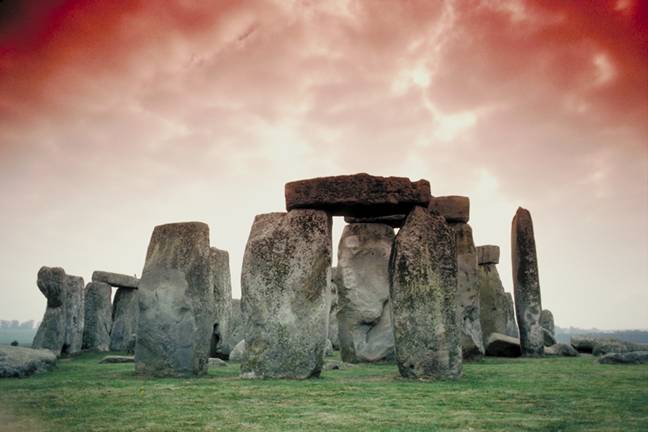 Stonehenge - the most famous prehistoric monument of Great Britain

Agriculture. Agriculture - intensive, highly mechanized and one of the most effective for European standards, meets about 75% of consumer needs for participation of less than 1.5% of labor resources. In agriculture used by almost a quarter of the country, more than half of which occupied by farmland. Approximately half of the territory occupied pastures.

Stockbreeding - The foundation of agriculture, its production is almost 70%. Mostly meat and dairy cattle in Midland and Yorkshire and the traditional sheep in Scotland, Northern England, Wales, developed in pig and poultry farming. Livestock of cattle is about 12 million pigs - with over 75 million heads, poultry - more than 130 million pieces. For sports and recreation purposes of breeding horses. Fish raised on farms or caught in the ocean.

One-third of arable land occupied by crops: wheat, oats, barley. From crops grown sugar beets, flax, potatoes. In eastern development has received and vegetable gardening. Geographically the main the agricultural regions of the country is the eastern and south-east England.

Transport. The country has developed all kinds of transport. Virtually everyone, even in a small town has an airport. Top international airports are located in the capital. For air transport  international traffic Britain second only to USA.

The length of railways reached 37 thousand kilometers. Since 1994, under the English Channel operates the tunnel, which allows the train to get to the continent without ferries. The length of highways of the country is about 390 km. Road and rail transport are the leaders in internal transportation of passengers and cargo. Pipelines in the country carrying condensate, gas, liquid petroleum gas, crude oil and refined products.

Over 200 years the country was the world leader in marine and today remains one of the major maritime powers. In the marine transportation accounted for over 85% of freight of the country. Major ports and terminals: Southampton, Dover, Manchester, Liverpool, London, Edinburgh.

There are more than 40 million users of Internet.

Foreign economic relations. As before, the economy country depends on foreign investment, which is dominated by flows capital from the U.S. and Western Europe. But the actual investment that previously concentrated in the countries of the colony, now guided by country Europe, including Eastern. For example, in Ukraine, with participation British capital and has successfully created a powerful trader "NIBULON".

Together with the countries of "big seven" The UK has changed the structure their exports. Today it exports of services (banking, insurance,  telecommunications, tourism, science and information, transport) more than goods and raw materials.

Objectivity of the existence of the country's economy depends on imports is the lack of its own raw materials. Importing countries, industrial goods, machinery, fuel, ore concentrates, food products from Germany, USA, China, Netherlands, France, Belgium, Norway and Italy.