EGP and natural resources potential. France - typical seaside country, bordering the west and north Atlantic Ocean, from the south - the Mediterranean Sea. It has borders with Belgium, Luxembourg, Germany, Switzerland, Italy, Spain and Andorra. Straits Channel and Pas de Calais is bordered by Great Britain. In southern countries are the principality of Monaco. Maritime borders of France has more than the land. Sea coast of Brittany, with picturesque rocky  coast, southern coast of the Mediterranean - long sandy beaches and Bay

Natural conditions there have been quite varied.  There are high mountains, plateaus and plains. Border with Spain are Pyrenees mountain range, through the mountain of the Alps and the Jura go borders with Italy and Switzerland, along the borders with Germany, Luxembourg and Belgium stretch of average and low Vosges Ardennes.

Significant ore deposits of the Alpine system in France is not. However, significant  height and high rainfall have made them important sources of water and energy are used in the construction of hydropower plants. Slopes valleys are well forested, and forestry plays an important role in economy of these areas. The basis for the development of dairy farming are the mountain meadows in the valleys created excellent conditions for development Vineyard.

The climate of France is determined by the influence of cold Atlantic Ocean in  northern areas and warm Mediterranean Sea in the south. Sevenny, low mountains, naturally separates two climatic zones. In the north country dominated by soft and moist maritime climate with mild fluctuating temperatures in summer and winter in the south - climate Mediterranean with higher average temperature and lower rainfall.

The largest rivers of France: Seine, Loire (longest), Garonne and Rhone. The system of channels connecting between a main river and the Rhine country.

Fertile soil has Haronnska plain at the foot Pirenyeyev and area northwest of the lower reaches of the Garonne.

French forests (pine, oak, beech and chestnut) strongly reduced under the influence of human activities and occupy only a quarter of the territory country. Among the fields are plowed forest plantations, especially typical landscapes of Normandy and Brittany. Most characteristic trees Mediterranean coasts: olive and cork oak.

Among the adverse effects of natural processes and France should be called floods, avalanches and storms middle of winter, drought and forest fires on  south near the Mediterranean Sea in summer. However, the entire territory of France is comfortable for life, tourist and recreational and economic of people.

Population. France - mono-national state, each native country is a Frenchman. French is the official language, but say in the country for Basque, Catalan, German, Breton, Flemish and Corsican languages

The average population density is 110 people. per km2. As for 2007 , the urban population is 77% of the total, but almost no urban areas (typical for most countries Western Europe), but the Lille region, including the industrial centers of Roubaix,  Tourcoing, Betyun, Lens, Douai and Valenciennes.

The highest concentration population - in Paris and its suburbs. There are about 1 / 6 population. Rural population is distributed evenly. High rural population density is characteristic of fertile areas of North  France, Brittany coast, the plains of Alsace, the Rhone valley and Sony. In agriculture, most recently in rural area received considerable development of green tourism. Life expectancy for As of 2009: men - 77.8 years, women - 84 years. Natural population growth is very low, due to a lack of manpower covered by labor migration, including seasonal, related to agricultural work, especially in the south country. Vidbuvayetsyai aging nation.

In France, the small and medium-sized city, major cities are Lyon, Marseille and Lille.

Paris, the main city of the historical region Ile-de-France, together with suburbs (Versailles, Saint-Denis, Ivry, Argenteuil, Boulogne-Biyankur, Dransi) forms a large urban agglomeration Paris with a population of 11.4 million people.

Paris - the largest industrial and transportation center of the country, here operating company cars and aircraft, electrical engineering, chemical, food, printing industry etc. manufactured consumer goods: fashion sewing and haberdashery products. With all areas and major ports of the French capital connecting the 11 rail lines, there are international airports: Charles  de Gaulle, Bourget, Orly. 16 main subway lines to the city, outport Paris is Le Havre. The capital surrounded by high-speed car Ring Road - Boulevard Periferik which combined with radial freeways and the entire network of roads of France, the core of which it is.

This is one of the world's largest centers of tourism, UNESCO placed here and more than 200 international organizations. 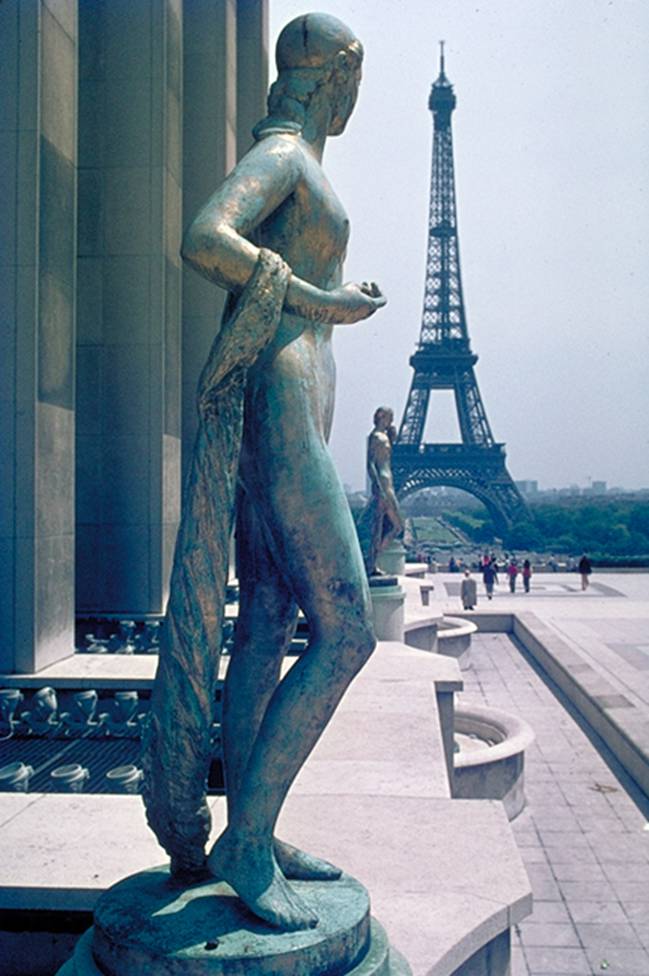 MarseilleThe biggest port in France in the Mediterranean Sea near the mouth of the Rhone, whose turnover - more than 90 million tons per year. In port complex developed oil refining, petrochemical, shipbuilding and aircraft. The city is the starting point of trans-European pipeline to Strasbourg and Karlsruhe (Germany).

Founded around 600 BC as a Greek colony Massaliya come from an aristocratic republic Fokeyi. Found them natural port is located a little further than the current Old Port.

Near the city is an archipelago Friuli and lock IGF - strengthening of the XVI century. defensive zone with the rocks described in the novel Alexandre Dumas' The Count of Monte Cristo. "

Marseille - the birthplace of the comic actor Fernandelya, filmed here famous Luc Besson film "Taxi." Lille, a city suknariv Flanders, captured Louis XIV in 1667, then  In 1708 the Dutch reclaimed and returned to the France for Utrecht peace in 1713

The city was founded as a military fortification French military engineer Sebastian Vauban in the XVII century. At the time, called the reinforcement "Queen of citadels."

The city has many museums, the most famous of which is a museum Fine Arts, famous works of Flemish and Dutch masters (Rubens, Van Dyck), Spanish (Goya) French (David, Delacroix, Monet, Renoir), has a rich collection ceramics and sculpture.

Lille - the birthplace of Charles de Gaulle, it is his house-museum.

Economy. France - economically developed country world, highly developed nuclear and space power. In total economy holds key place in the European Union, on GDP per capita population is in top twenty of the world ($ 27,600). Traditional feature of French economic policy - the presence of state-  property or a large share of its stock in large companies, banks, insurance business in aviation, telecommunications, mechanical engineering, oil and gas industry ("Totan"). There is planning that is not normative and indicative. During 2007-2008, the government States undertook several major reforms in labor legislation on the working week. The degree of social protection  population among the highest in the world. Approximately 30% of GDP spent on social needs.

A large share of the economy in France is foreign capital. Its fate in industry accounts for almost 40% in real estate - about 27%, trade - 20%, services - 9%. The enterprises with foreign capital employed of over 20% of the workforce of the country. Especially large share of foreign capital, more than 50% in science and other fields of advanced technology. 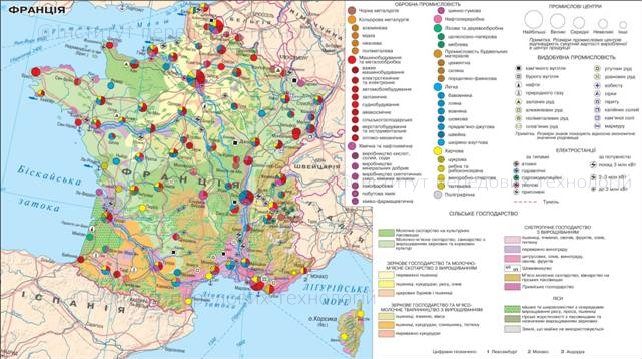 Industry. Industry provides Over 30% of jobs, 40% of investments, 80% of exports. Substantial deposits own mineral resources provides a basis for mining and development of heavy industry.

The level of development of ferrous metallurgy in the country takes the lead place in the world rankings for steel production is on the 3rd place in  Western Europe. France is part of the Mediterranean bauxite province (together with Greece, Italy and Hungary). Black metallurgy France more inclined to port areas, such as Dunkirk steel works factory in the American coal and iron ore from Africa and Venezuela.

The volume of chemical products is part of the world  Leaders (ranked 4th in world exports), the main areas development of chemical industry: Paris, Rhine-Alpine and North. Here the production of synthetic resins, plastics, rubber, pharmaceutical products. Gas produced in the bowels of the country is  raw material for sulfur.

France is a considerable producer of pulp and paper, printing products of the country known abroad. Highly developed country food (On second place in the world by volume of exports after the U.S.) industry. The relatively minor role in the total economy, but for the prestige country plays manufacture and sale of luxury goods, is a world leader concern "Louis VUITTON-Moe-Hennessy."

France - one of the most advanced countries in the field of nuclear Energy: more than 75% of energy produced at nuclear power plants. France continues build new nuclear power plants and is second after the United States in the world for mining  Power stations of this type. In addition, developing alternative types of energy, including wind and tidal stations (The world's first built in Brittany). Hydropower capacity is concentrated in Alps.

Recently, more attention is paid to the combination of science and direct production. Technopolis is the center of Toulouse knowledge-intensive industries, including aviation and space. France There are more than 40 technology parks. The biggest of them - Ile-de-France under Paris. He specializes in applying the latest technologies in electronics, pharmacology and more.

On the basis of Marseille and Fos ports formed the largest in France, the control panel. Together they have a turnover of 100 million tons per year, and specialize in Port Steel and oil refining.

France was and remains an important producer of textiles in Europe (Lille, Kabre, Armentyer).

Agriculture is the most wards the state sector, although basis for it - private land ownership. Deciding the fate of products provide large farms with holdings of more than 100 hectares, but numerically dominated small and medium. In terms of agricultural products  France takes first place in Western Europe and third in the world after USA and Canada. It is the largest European producer of wheat, butter, beef, cheese (over 400 varieties), sausages, confectionery, Wine, champagne, cognac. 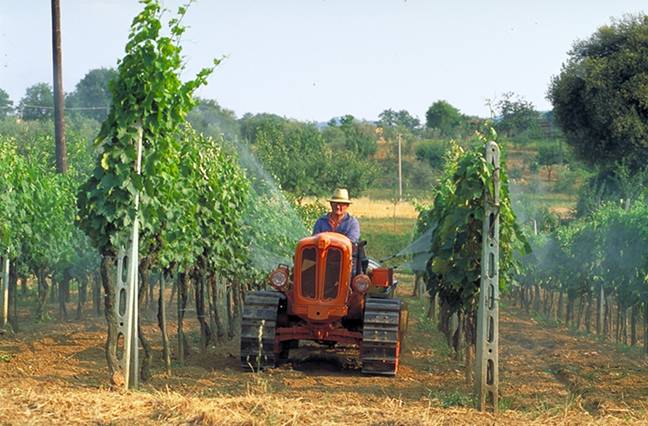 More than half of livestock production provides. French farmers are main opponents to the introduction of genetically modified processes products in Europe because French products traditionally highly valued through its high quality. Livestock breeding has been bovine milk and meat lines, pigs, sheep, poultry.

Natural resources are depleted of fish and seafood, but in many artificially bred fish ponds. In the Bay of Biscay is fishing sardines, herring and flounder, lobster, shrimp and shellfish (oysters and mussels).

Transportation France has the most developed network of railways in Europe (Total length of 29,370 km) of roads. Most cities connected network of high-speed highways, high-speed branch line laid in the tunnel under the Strait of La Manche. Virtually every  city

Foreign economic relations. France is one of the most visited countries and provides services to 75 million foreign tourists per year.