Legislature: Bicameral parliament (House of Councillors and House of Representatives) 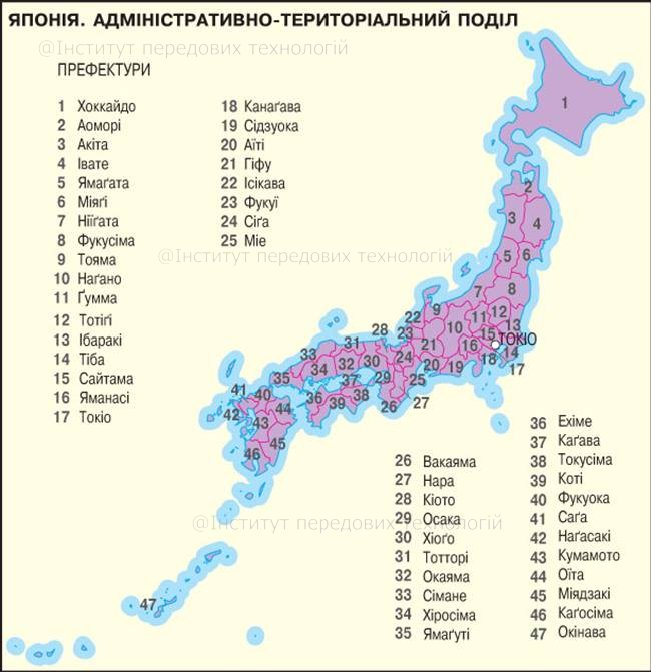 EGP and natural resources potential. Japan, the state  East Asia, occupying the chain of islands (Hokkaido, Honshu, Kyushu, Sykoku,  Ryukyu Archipelago, and others., only about 4 thousand), which are washed by the Pacific Ocean, Japan, Okhotsk and the East China Sea. Coming neighboring countries are China, South Korea and Russia. The latter country has the largest territorial claims on the so-called "Northern Territories ", which Japan considers its (Kunashir, Iturup, Shikotan and island ridge Habomai).

Relief mostly mountainous country with the presence of numerous operating (60) and extinct volcanoes. High Point - Fujiyama Volcano on the island. Honshu (3776 m). The processes of mountain building continues today, why earthquakes happen here from a half to eight thousand times a year. All modern buildings are built on protyseysmichniy basis. Pacific coast affected by the tsunami height from 30 to 50 m. The climate of temperate in the north to tropical monsoonal in the south. Average January temperatures - from-50C on the island. Hokkaido to 160p - the archipelago Ryukyu, July - respectively from 22 to 280p. Precipitation in most of country - from 1700 - 2000 to 4000 mm per year, usually in autumn are typhoons. In areas of volcanic activity are the hot springs. Japan belongs to the world that is almost completely mastered their land resources.

Rivers short but bahatovodni unsuitable for shipping. They are used for the construction of hydropower and water supply. Over 2 / 3 of the territory covered by forests (of evergreen conifers in subtropical) and shrubs, but the need for wood they cover only  50%.

Nadra country's poor. For example, the oil produced per year less than in U.S. per day, the need for iron ore, lead, zinc own resources provide only 1 - 2% of the necessary requirements, because of this country totally dependent on imported mineral raw materials.

Population. With a population of Japan holds 10th place in the world. Japan - a typical odnonatsionalna country, 99.9% population is Japanese, but they are Koreans, Chinese, Ainu - descendants of the ancient population of the islands. The country has a place polikonfesiynist - the majority of the population professes two religions: Shintoism and Buddhism and there are Christian minorities.

Low fertility, high life expectancy (men - 79  years, women - 86) lead to aging of the nation - pensioners are 20, and children - 16% of the population is threatened in the coming years deficit Human Resources.

Population density - One of the largest in the world: 321 people. per km2 on the coastal plains, it reaches 10 000, and in large places - even more. 70% of population living on the Pacific coastline. Urban population is 80%, 40% of them live in three largest urban agglomerations and that form the megalopolis Tokaido. For employment in the areas of the country's population is divided  follows: agriculture employs 4.4% in industry - 27.9%, in the service sector - 66.4%.

Tokyo, capital of Japan, located at the southeast. Honshu,  in the Kanto plain, the confluence of the rivers Edohava, Arakawa, Sumida, Tamo  in Tokyo Bay, one of the largest and fastest growing cities in the world, The average population density which is 800 - 1000 people. 1 km2. 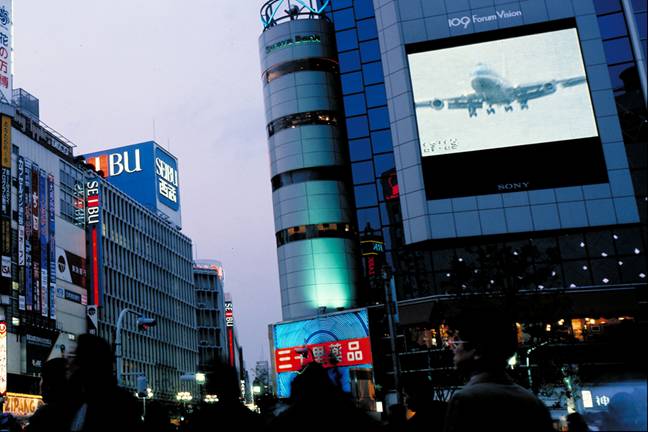 Tokyo - the largest scientific and cultural center of Japan with more than 100 state, municipal and private universities are  National Aerospace Laboratory, Cancer Center, Research  Center disaster protection and more. The city is about 400 picturesque galleries, dozens of museums, a zoo (from 1882), aquariums. 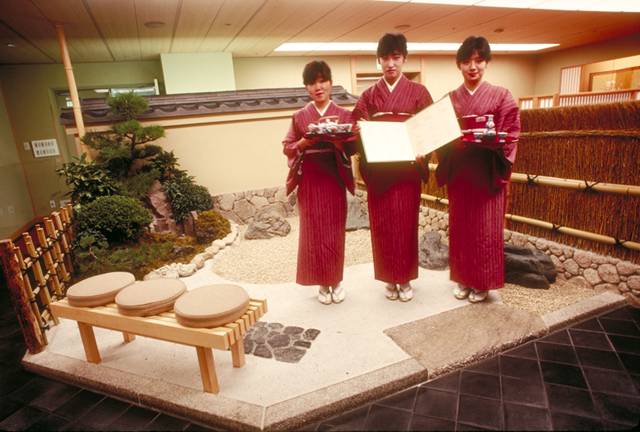 Tokyo participant has a traditional rectangular urban planning blocks, made in Japan anciently. However, the location of individual  urban areas relative to each other is not subject to strict rectangular projection. Each comes from a specific address priority structures, but not finding in relation to other buildings in the street number.  Tokyo Streets have no names, but the main shopping street in Tokyo - Hinza ("Silver") is the name for other urban areas plus digital designation of the building.

In downtown - Earthquake tall skyscrapers of 50 storeys and above. In Kokuhikane sports tournaments with wrestler.

In Tokyo there are about 1750 and in 2900 Shinto Buddhist churches, the Orthodox Cathedral of the Resurrection of Christ. At 12 km from Tokyo created Tokyo Disneyland (1983, about 48 ha).

Osaka, City and port in Japan on the island. Honshu, the coast of Osaka Bay, the second largest and economic importance city

Industrial North and the southern part of the historic city from north to South Boulevard intersects Midosudzi - main city. Aquarium in Osaka - one of the largest in the world. City name "Japanese Venice" through numerous channels. Osakak - considerable scientific and cultural center of the country: there are two universities and other universities, museums Art, Osaka Castle, Japanese arts and crafts, planetarium, numerical parks.

Nagoya, City and port in Japan, the central part  Fr. Honshu, the third after Tokyo and Osaka financial-industrial, transport and commercial center of the country, one of the main ports of Japan (Freight port 110 million tons per year). It produces about 10% industrial production of the country. In satellite towns subsidiaries machinery (especially transport, including automobile, shipbuilding and ship repair, and textile and accurate machinery), electrical industry, ferrous and nonferrous metallurgy. 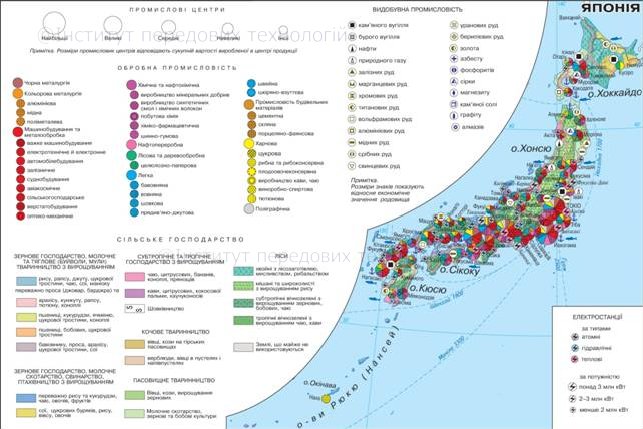 Japan is the Asian leader in terms of GDP per capita - 38,000 $, Ranks first in the world in terms of gold reserves (521 $ billion), third place (after USA and China) - the production of industrial and  fifth - the production of agricultural products. For the last decade the country has sustained a positive balance of foreign trade. Japan entered the post-industrial stage of development, significant share of GDP is income from the service sector, health, science, financial and commercial activities and communications.

Japan has two acute problems: a huge government debt, which amount  is 170% of GDP, and an aging population (demographic projections necessarily bad for the country if the situation in the country will not change, then before the next century the number will decrease by half Japanese) slowly changing the mentality of the Japanese: the stereotype of "workaholic" gradually changes to the stereotype of "a person who works for money provide him a comfortable life. " Also in the country continue discussion on the substance of reform in restructuring the economy and management. Recent global trends of rising mineral raw materials, which determines the country's economy, led to a reduction output in the aluminum industry more than 20 times in oil industry - by 40%, ferrous metallurgy - 25%. Gradually  growing environmental problems.

In Japan, adopted the program "Technopolis", it involves construction 19 scientific bases for even medium-sized division of scientific  personnel in the country. Today, 80% of scientists and engineers working in Tokyo and major cities.

Industry. Japan - a highly post-industrial country. Along with the giant companies are acting  Numerous small, especially in the light and food industries. Economy Japan depends on imports of raw materials and fuel, mining industry makes 0.2% of GDP.

Energetics country more than 80% dependent on energy imports, but Japan ranks third in the world producing electricity. Almost 60% of its thermal power stations provide,  operating on imported fuel (coal, natural gas, fuel oil) Japan's coal mining decreased (due to high cost) and the volume of its imports from Australia in particular. This is facilitated by commissioning new power station.

In the mid-90s of XX century. Japan ceded first place to China's steel production, but today metallurgy of the country - one of the  most advanced in the world. The world's largest metallurgical plant works in Fukuyama. Two-thirds of molten steel in converters, the other - in  Electric.

With the release of silk fabric top country in the world synthetic - the third largest pulp and paper production products - the fourth.

Geographically the country is divided into eight densely located economic regions, the most powerful of which is the Kanto (Tokyo, Tida, Kawasaki, Yokohama, specialization - electronics, shipbuilding, the scope services), Kinki (Osaka, Kobe, Kyoto, electronics, ferrous and nonferrous metallurgy, chemical industry) and Chubu (Nagoya, Toyota, Hamamatsu; Specialization - automotive, cars district allows a third country), belonging to Pacific Industrial bands that concentrated almost 80% of the population and economic potential. 40% of GDP gives Kanto - the main industrial areas of the country. O. Kyushu is called "silicone" due to the high level of development here electronics industry. District Tohoyuku with economic center in Hirosymi specializes in heavy, including shipbuilding. Ura-Nippon - agricultural "back" side of Japan stretches along Sea of

Agriculture in the country is on intensive basis. But in terms of population own agricultural products compared to other developed of Japan is far behind. Completely cover the needs of their country only in  rice, vegetables and eggs, the demand for fruits is met by 75% in milk and dairy products - by 80% in veal - 64% more. In agriculture used the largest plain area - Kanto, Tokyo and, on the island. Honshu, Isikari on the island. Hokkaido others. They almost completely finished, but land suitable for farming, in Japan had. Dominated by small landholdings (land mostly to 1.5 ha.). The bulk of the products gives crop, leading culture which is rice. Developed as vegetable growing and gardening. Traditionally developed floriculture.

Japan is among the highest in the world of fishing and mining  seafood. Bred cattle, pigs, birds, silkworm.

Were formed clearly determined the suburban agricultural specialization, the main of which is a band from valley to valley Kanto Kinki in  within the Tokaido megalopolis.

Transport. Japan has one of the most developed transport networks of the world, which is a feature of almost complete absence pipeline and maritime transport. 55% of freight and 67% performs passenger road transport. Fleet Japan second only to USA. The total length of roads, about 1.2 million km, the density and length of roads under the country ranks first and five cities in the world. Sea transport is dominated in foreign trade country and second largest cargo turnover and the third passenger. Main ports: Kobe, Chiba, Yokohama, Nagoya, Osaka, Kawasaki, Tokyo, Hakodate, Kitakyusyu.

Length of railways - More than 20.1 thousand km, but the role rail transport in recent times is reduced, it is second passenger seat and plays a minor role in turnover. There operate high-speed railways, the first of them "Tokaido-Synkansen" operate between Osaka and Tokyo since 1964 Maximum speed is 300 km per hour., Path length 515 km. By day she is carrying more than 375 thousand passengers. A train consisting of 16 carriages.

The main air gate of the country - Haneda International Airport in Tokyo,  an area over 500 hectares, and the length of the runway is 3 500 m of the largest airports in the world is also in the airport Osaka. In addition, international airports are in urban Fukuoka, Kagoshima, Kansai, Nagoya. In 2003, the countries adopted a program of further  development of aviation from the creation of the first domestic jet airliner.

Between the islands there are ferries, bridges, underwater tunnels, the largest  of them between Honshu and Hokkaido has a length of 53 km. Over 40% of households farms and 90% of enterprises in the country using Internet.

Significant revenue GDP of Japan is the world's tourism. Among prominent tourist sites of the country - many national and natural  parks and architectural complexes, museums, Shinto and Buddhist temples. 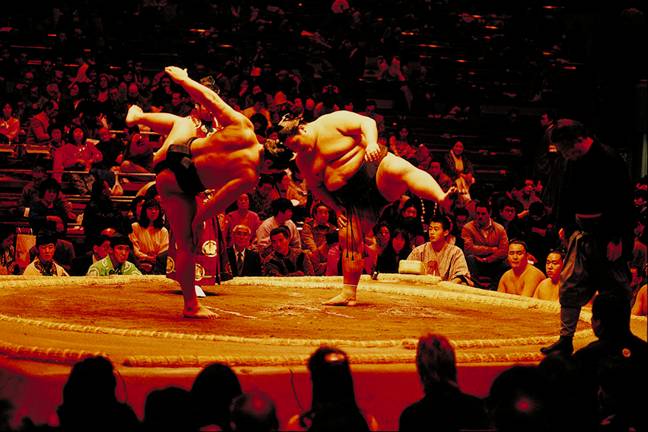