Topic 1. Political Map of the World

§ 3. Modern political map of the world

2.    Think of the overall course of history the main events place in the world in the modern period.

UNITS the map. Of course, you are aware the map: This is not time to gaze of color spots, traced winding lines for borders, looking for spots capitals. In fact, at the Fermi separating the state, the territories of countries that recorded in the cartographic basis, is hidden the fate of peoples: a bloody war for the right to own a certain part land, independence, frustration of expectations to live in futility own country ...

Political Map of the World - A geographic map that shows the location of their borders and capital. Political Map reflects the political and geographical changes occurring in society: formation of new independent states, union territories or split existing ones, change their capital, loss of sovereignty or gaining more. Historical and geographical dynamics - the main features of the map and its separate regions.

Political map which originated with the formation of the first countries to reflect their spatial location. Knowledge about it urgently needed modern man who has to imagine where the Laos or Mozambique; Understand why the MaltaYou can not get there by train, to know that Sloveniaand Slovakia, Iran and Iraq, Sweden and Switzerland - A different state. Due to a political map historical period we can find a location Babylon, Austria-Hungary, the Soviet Union and other former states. 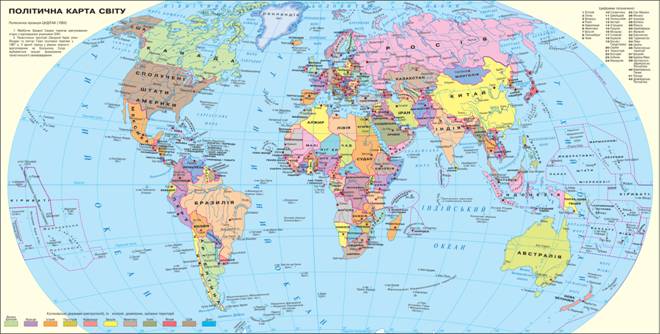 Map. Political Map of the World

Territory - Part of the earth's surface natural resources and man that has a certain spatial boundaries (Length, area) and geographical location. Country - A territory with defined borders and a population that may be dependent or independent. State- Independent (sovereign) country with a territory, economy and political authorities. Thus, the state is a special form of society, combined common social and cultural interests, which occupies a territory has own management and security, has internal and external sovereignty. The present world map covering more than 260 units the vast majority of them (193) - the state.

Name The largest territory. In what Historical and geographicalregions of the world they are located?

2.    Name the countries that are in the same Historical and geographical region of the world, and Ukraine.

4.    In which regions of the world is concentrated the largest number colonies?

Interestingly, the sovereignty of the state and distributed in Embassies and consulates, as well as aircraft, ships and even marine cables placed outside their own territory.

According to scientists in the near future on the political map of the world may be up to 400 political and geographic entities. Therefore, it is likely that, looking at the political map, which will examine your grandchildren you did not recognize.

STAGES OF FORMATION. Over the centuries acquired flowering and deteriorate the state, appeared and disappeared forever Empire, which occupied huge territories and held in subjection many people. To navigate in the events reflected on the political map, distinguish several stages of its formation. Each stage characterized by specific time frames and specifics of the existence of countries (Table 1).

Stages of the map

Within latest stage secrete several periods of the map. In period interwar (1914 - 1945's) as you already know the course of history, worsening political relations between states has grown in the first, and then the second world war. After them Europe and Japanfound themselves in deep economic and social crisis, and the leader of the world economy and politics gradually became U.S.. Colonies Germany came under the management of the winners in the First World War II. Decreased area and most of Germany - Alsace and Lorraine went to France. On the political map of Europe ceased to exist Prussia. Its territory was annexed to Poland and the Soviet Union. Increased colony of France. England possessed 60% of colonies around the world. In 1917 become independent FinlandAnd a year later broke Austria-Hungary. Instead, there Austria, Hungary, Czechoslovakia and Yugoslavia. This year the sovereignty restored Poland. In 1919, independence IrelandAnd in 1921 - Mongolia. In 1923 disappeared from the political arena Ottoman empire, Formed in its place Turkey Transiordaniya, Palestine, Iraq, Syria, Lebanon. During this period, gained sovereignty and again lost its Baltic countries: Lithuania, Latvia, Estonia. 1944 brought independence Iceland. 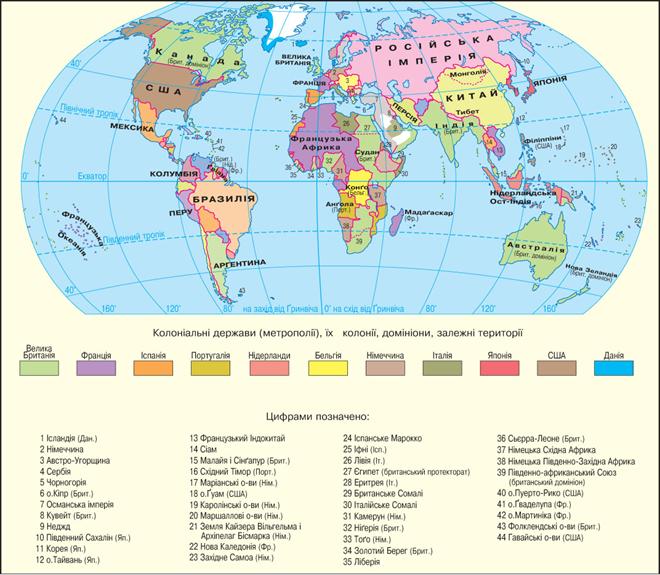 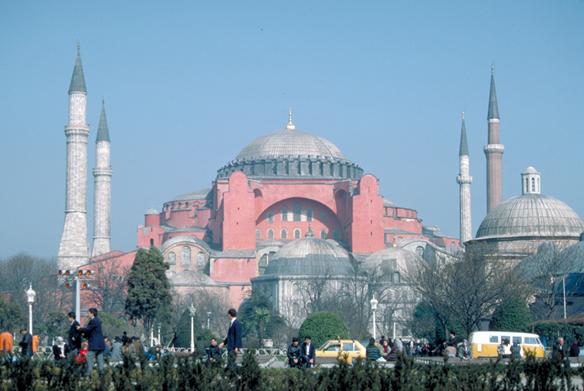 У postwar time (1946 - 1989's) on the political map of the world have been significant changes. In 1948, in accordance with General Assembly resolution formed state Israel. The following year, appeared on the political map Federal Republic of Germany and German Democratic RepublicThat caused deep divisions among states - the winner in World War II, and intensified the confrontation between the capitalist and socialist systems between the U.S. and the USSR. In the history of these relations are called the "cold war". Fundamental changes took place on the political map Africa: On the continent, where the early twentieth century. was only a few states, their was about 50. Colonial system was abolished in the USA, Great Britain and France. 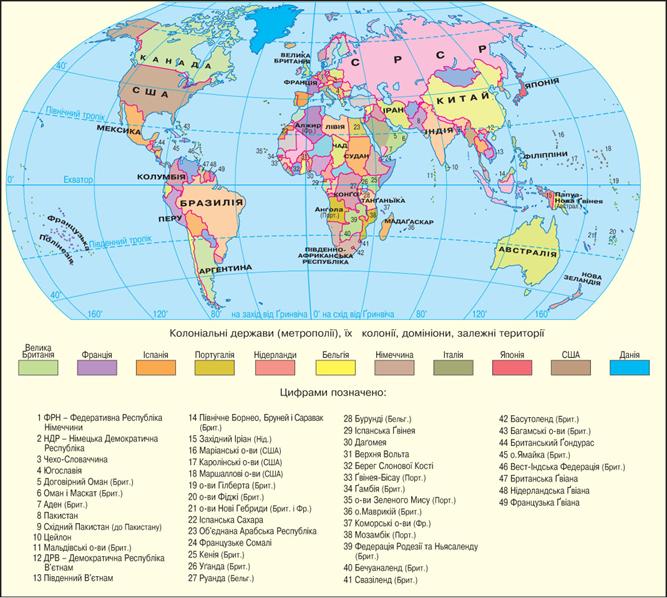 Beginning modern period (From 1990) of the map and put in two events that radically changed the world: association Germany in 1990 and decay Soviet Union next year. These events triggered a chain Reaction on the political map of the world: the socialist system collapsed, in 1993 Czechoslovakia split into Czech Republic and Slovakia; Federal Federal Republic of Yugoslavia - to Serbia, Montenegro, Slovenia, Croatia, Bosnia and Herzegovina, Macedonia, Kosovo (Its independence was recognized part). No less significant events occurred in other regions: Asia in 1990 combined Yemen, The same year political map of Africa, a new sovereign state - Namibia, And in 1993 - Eritrea; in 1997 British colony Hong Konginto a Hong Kong, And in 1999 Portuguese Macau - By Macau - Special Administrative Region China.

After the collapse of Soviet Union ended the era of bipolar world. It became harder and It formed new centers of economic and political forces: U.S. and Canada, Combined Europe, China, Japan, Russia. Calls the weight of the Arab world and India. 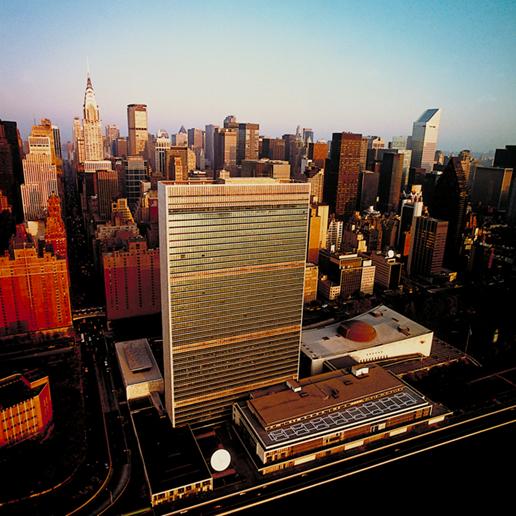 REGIONAL DIVISION OF THE WORLD. A look at the the current political map of the world will see that all land surface, except Antarctica, divided between the countries. According to their location within a given distinguish large parts of the world Historical and geographicalregions, which in turn are divided into smaller (Table 2). The main measure of their allocation is the geographical approach. Often it is supplemented by political or cultural factors. For example, during the existence of the socialist system was popular division Europeon Western and Eastern. 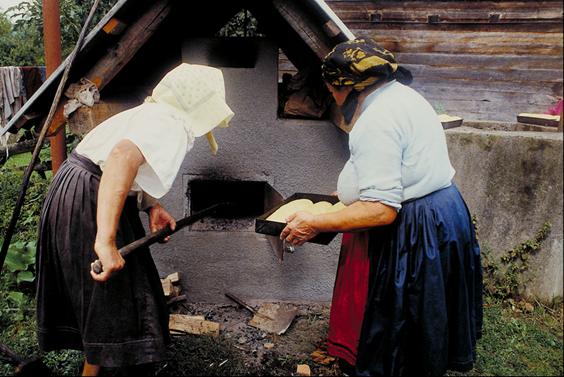 The traditional way of life preserved in many regions Eastern Europe

Such ideological approach that does not fully meet the contemporary socio-economic and socio-political realities, is stored somewhere today. Cultural factors are the basis for selection Latin America - An area covering the Americas, where the modern official language formed based on the Latin and Anglo-American - A region where English predominates.

One of division of the world problems is the allocation Russiato a given region:

Most countries - AfricaAnd the lowest - in  North America. 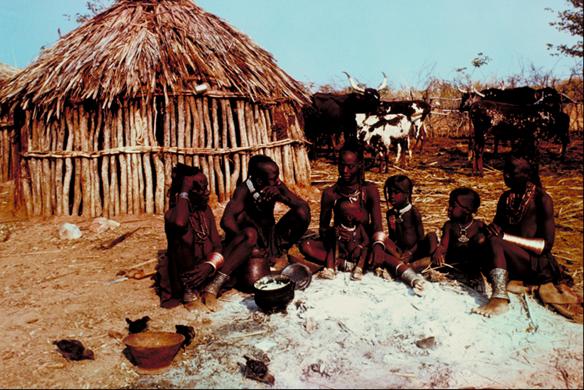 Detailed description of the regions the world will be offered in the second section of the textbook "Regions and countries world.

Historical and geographical regions of the world 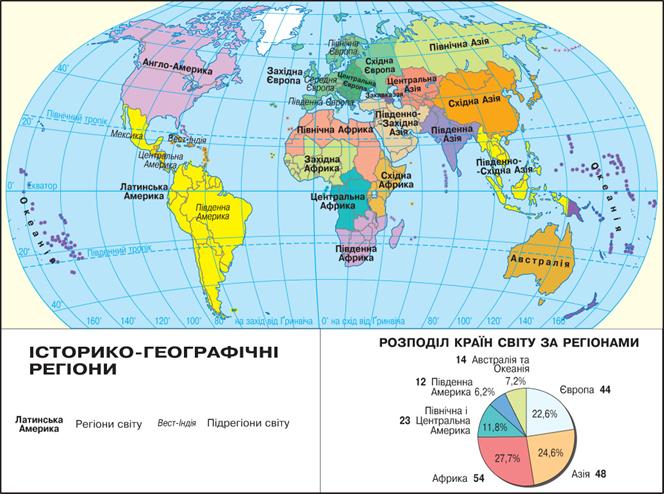 That  reflects the political map of the world?

2.    Prove that the map feature is its changeability.

3.    Is there any state country? Can any country  considered as a State? A justification.

4.    Which countries have disappeared off the map during  last two  decades?

5.    Which country has the world's political map during  recent decades?