1.    Remember the course of law that exist in the state

2.    What% of administrative divisions Ukraine is?

FORMS OF GOVERNMENT. Countries differ in the form of government. The main forms of government is monarchy and republic

Monarchy - this form of government where the monarch is head of state (king, prince, Sultan, Shah, Emir Sheikh), and the power inherited by his successor. In the world numbered some 30 monarchies. Most of them are in Asia and Europe. There Monarchy: absolute, in which legislative power is vested in the monarch (Brunei, Qatar, Oman, United Arab Emirates (UAE), Etc..) constitutionalWhere supremacy of the monarch is limited by the constitution, law or tradition (Great Britain, Denmark, Sweden, Morocco, Jordan, Kuwait); theocratic, in which the head of the church is also the head of state (Vatican). 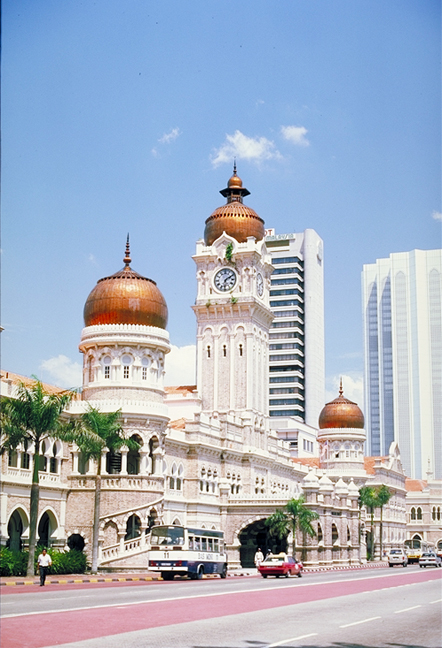 Among the constitutional monarchies of the world distinguished parliamentary, where the monarch has no real power and performs only representative functions (United Britain, Denmark, Sweden) and dualistic, in which the power of the monarch is limited by the constitution, but designated him under the law he has complete freedom in making decisions (Morocco, Jordan, Kuwait).

Republic - form of government in which all the higher authorities are elected or formed by national institutions - parliaments. Republican form of government - the most common in the world. Most of the republics in Africa - 50 (Fig. 11). There are the following republics: presidentialCharacterized significant role of the President who is concentrating in their hands the powers of the Head state and head of government (U.S., Brazil, Argentina, Kazakhstan, Uzbekistan, South Africa); parliamentaryIn which more Parliament has the power, which is accountable to the government (Germany, Italy, Greece, Turkey, Israel, India et al.) 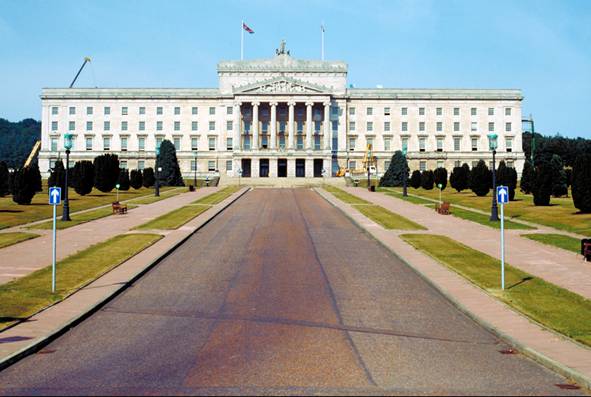 mixed, characterized by the division of powers between the president and Parliament: the president has the right to dissolve parliament and the parliament in turn have a right to a vote of confidence in government, formed by the President (France Portugal, Ukraine, Russia, Armenia, Egypt et al.) socialist, to have their own representative bodies, combining legislative and executive power (China, Cuba, North Korea). 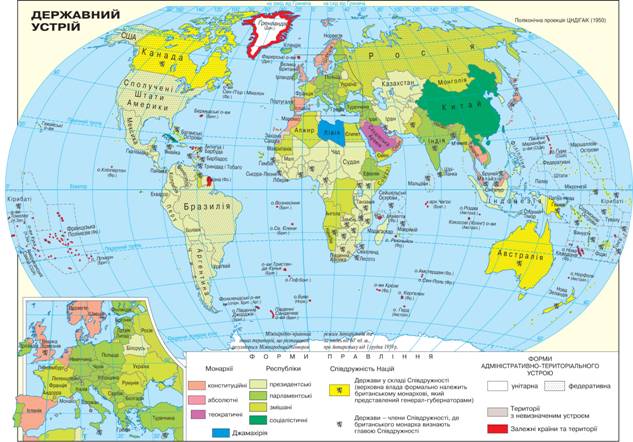 Name regions of the world where popular presidential republic.

2.    Where in the world are socialist republic?

3.    In which region of the world remained an absolute monarchy?

4.    What form of government indicated on the map in Ukraine?

Form of government. By political-territorial system distinguishes between unitary, federated and confederate states.

Unitary state - a form of system in which the only area of the country in its composition, that is not independent autonomous entities. For example, Italy, France, Poland, Japan. Unitary is the vast majority of countries. According to the constitution is a unitary state and Ukraine.

Federal State - Form of government in which area of the country has in its structure self-formation - the federal units (republics, states, land, province etc.) that make up one state at a certain internal autonomy to constitutional basis of a single union. Federal divisions may take place at based on national and ethnic (Russia, Belgium, Nigeria) Or Historical and geographical (U.S., Canada, Mexico, Brazil, Germany, South Africa) Principle. 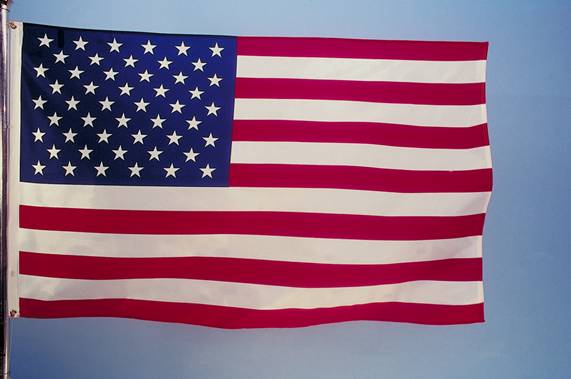 Star and Stripes U.S. flag - the symbol of a federated system of the country: 50 stars represent the states State

Confederation - of a permanent alliance, created to achieve certain political or military goal. Each state within the confederation preserves independence and has the authorities government. At the present stage of the map Confederation is a Union State - confederate union of Belarus and Russia established in 2000

Over time, the confederation are federations or break. Switzerland, despite its official name - Swiss Confederation, is a classical

Federation. In recent confederations were Serbia and Montenegro (2003-2006). "Soft" confederation called the European Union, although legally it is not fixed.