1.     Remember that signs of a tropical desert climate.

2.     What features of rivers in the desert area?

Location and climatic conditions. Deserts and semi occupy large areas of Africa. They lie in the tropical and subtropical climatic zones. In North hemisphere is the largest desert in the world - SaharaThat stretches from west to east at 5 thousand km and from north south - to 2 thousand km. In the Southern Hemisphere are desert Namibia and semi Kalahari. The title (Sahara in Arabic meanswilderness area, wilderness; Kalahari translated from the language local tribes as place thirst place sufferingAnd Namibia – that bypass party) Already indicate the features were there natural conditions.

The rainfall in the semi-deserts small - 400 mm, and in desert tiny - 100 mm per year. Summer is extremely hot in the Sahara. Clouds sky almost never because sunlight rozpikaye surface. Sand and rocks often heated to 70 0C, and the air temperature reaches 50 0S. Serene causes of night and cold, as clouds, as you know night work as a blanket that prevents vyholodzhuvatysya earth's surface. So night temperature drops sharply, sometimes to 0 0S. Liberty the heat changes piercing cold night. This causes very large fluctuations in daily temperatures. Heat transfer is especially difficult because of hot and dry winds. In summer they take off the clouds of sand. Dunes are alive in the eyes, dust covers sun. Hot dry air hard to breathe. In the mouth, nose and eyes nabyvayetsya sand. Hammer, everything in the cracks and roots dried herbs and desert seems dead.

SOILS. Under extremely dry desert climate of organic residues of plants are almost absent, lack of water, so the soil barely formed. Often instead the surface schebinkoyu and covered with loose sand. Poor soils called rocky or sandy desert soils. Where the soil under the vegetation still formed,  Most common are: sirozemy.

Translation:. Under extremely dry desert climate vegetation is extremely poor. Here and there where tuft grasses and prickly shrubs. Patches of plants do not. To survive the harsh conditions they are adapted or obtain and retain moisture, or reduce its evaporation. Yes, long roots can reach deeper more wet layers. To reduce evaporation leaves some bushes become a thorn in others they were small. Some shrubs during prolonged drought can not just throw the leaves, but branches and bark. In other effective adjustment plants became short life cycle: with the first drops of rain they quickly sprout, blossom quickly, and give seed.

In extremely dry Sahara mostly common piercing shrubs and low tamarisk  acacia. Between them hard sometimes grow cereals. In oases where underground water deposited near the surface (10 m), wheat, barley, vegetables. But the main culture is the date palm.

Poorer vegetation in the Namib Desert, which say that God created it in anger. When the rich tropical sun for months there is single drop of rain falls. Air mass flow chilled Benhelskoyu, prevent the raising of moist sea air and the formation of clouds. As a result formed by the rain mists, which almost 300 days a year in the places where desert. They bring about 50 mm water used by a few plants - mostly stunted thorns. Fogs, which run from Atlantic, allow unique plant velvichiyi amazing that has only two huge strichkopodibnyh leaves them to draw water "straight from heaven." Velvichiya really amazing: two leaves that the wind is split into long narrow strips grow directly on a wide trunk like a tree stump. Its root resembles giant carrot that serves not only the storeroom of nutrients, but also reliable anchor at frequent sand storms.

In the Kalahari semi-desert, where more moisture, Aloe and Euphorbia accumulate on the stock in its fleshy leaves or stems. They grow wild and watermelons, which are often the animals and local people replace the water.

Yes tytuluyut Finikov palm, which is the main cultural oasis. It is - tall slim tree 30 m Arabic proverb says that she keeps his head on fire, and feet in the water. From Palm made of wood doors, poles, covered with leaves home with fiber weave baskets and rope. But the main wealth is its dates. They eat raw, fried or dried. For this Finikov palm bread called Sahara.

No tree or shrub or grass

Velvichiya amazing plant mysterious - no tree, no bush or grass, but something completely original. One, it resembles a large loaf cabbage, the other - a tree-curbstone, live tree stump, a giant spider and even a bunch debris. Botanists consider it a tree. Interestingly, in this tree, no branches, and there are only two leaf. However, what this leaves! They are eternal. Unlike our oak, which resets every year leaves, or pines, which are updated every hvoyinky 3 years, leaves velvichiyi serve her life. And it lives up to 2 000 years! What is a long time for such leaves should grow? Nature has limited their 5-meter long and has invented a conveyor height: leaves growing near the stem, and its end gradually die off. Velvichiya Named in honor of botanist Friedrich Velvycha, which it described. But local people from time immemorial calls it otdzhy post – Mr big. And Indeed, the great lord almost bare desert!

ANIMAL WORLD. What would have been arid and semi desert, but and they were inhabited by animals. All beings, like plants, adapted to heat and moisture deficiency. Yes, most animals are nocturnal and daytime hiding from the burning rays of sun in the holes and cracks. Some may long dispensing water, a camel.

In the Sahara antelope can run long distances in search of food and water. Gazelle addaks - endemic in Africa - is among boundless sands, so has great hoof, helping her to move easily loose dunes. Common rodents - gerbil, jerboa, which in hot weather hiding in holes. Since predators are jackals, hyenas, Sand Cat. Caracal - deserted Lynx -  in agility and speed can compete with the cheetah. She hunts gazelles and large rodents, and highly bouncing can catch birds just on the fly. Fox Fenech hunts at night for lizards, rodents and birds, looking for them with large sensitive ears. Lizards and snakes, including many toxic (Horned viper, sand ETF Egyptian cobra), can long go without water. Since insects are scarab beetles, grasshoppers. Pervasive and scorpions. 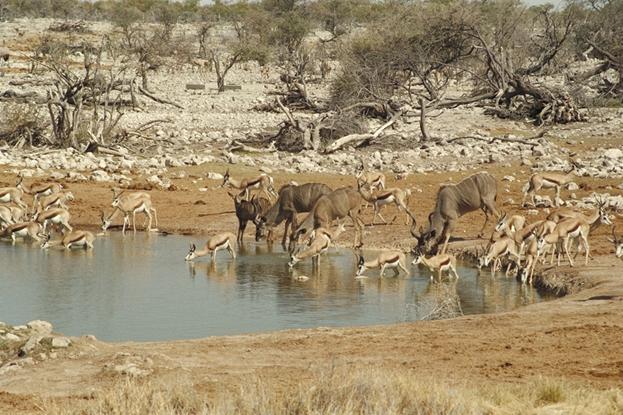 Valley of the Nile crocodile infested always that old Egyptians considered sacred animals - the incarnation of the god of Seneca. Since crocodiles have done even mummy and kept them in the temples. In honor of these animals is named one of Egyptian towns ---  Krokodylopolis. Between so this 6-meter resourceful and wily predator eats not only fish, on occasion enough antelopes and zebras, who come to the watering, but is and real danger to humans. 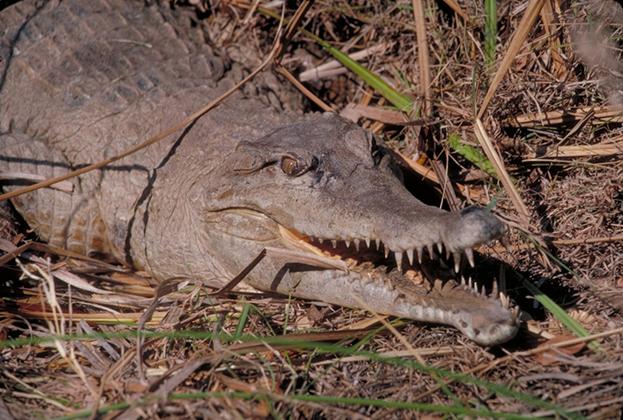 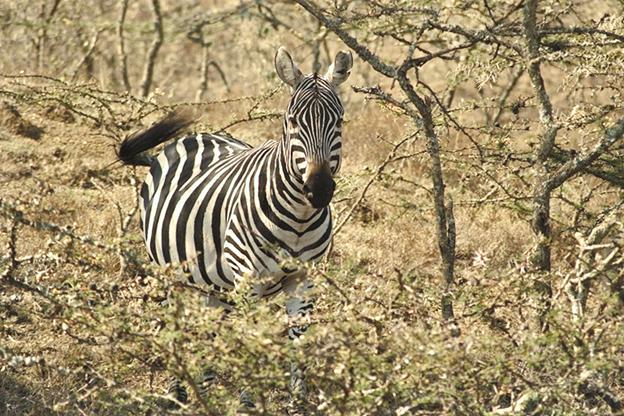 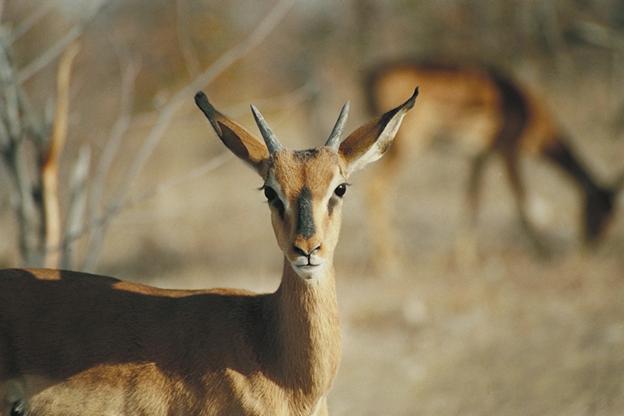 Natural vegetation in this zone is changed man - in its place there were vineyards, citrus plantations, growing crops, tobacco, cotton.

1. Why savannas changing deserts? In which climate zones are desert and semi?

2. What sets the desert from other natural areas?

3. What soils are formed in deserts?

4. How plants have adapted to life in deserts and semi-deserts?

5. Due to which animals can survive in deserts?

7. How to change vegetation zones tverdolystyh evergreen forests and bushes?

1. Geographical location (which is part of the mainland, where climatic zone).

2. Climate (what type of climate, prevailing winds, average temperature of the warmest and coldest months, rainfall).