1. Remember the course of history, where in Africa there was an ancient civilization.

Countries - is part of the continent. Studying them, you become familiar not only with the peculiarities of nature, that depend on geographical situation of the country on the mainland, but also with the population and its economic activities. Characterize the plan (Table. 3).

EGYPT. This state is located on north of the mainland, at the junction of Africa and Asia. Almost all of its territory (96%) is area in hot deserts. Climate - tropical desert, through which dry adverse to human life. From north to south crosses only River - Nile. Ancient Greek historian Herodotus called Egypt "the gift of the Nile." Indeed, the river - the only source of life desert. Nile Valley is the number of oases. Its fertile land is extremely beneficial for the development of the economy. That there are 6 thousand years ago there was one ancient civilizations. With a population of Egypt in second place in Africa, but almost all of it focused on a narrow strip of land that irrigated Nile. The vast majority of the population - Arabs, who profess Islam. All cities countries - big and small, ancient and modern - located in the Nile valley. The capital of the country - Cairo - One of the largest cities in Africa.

Oases in the desert connected by rail and roads. However, the combination complicate dunes, which, moving, constantly bombarded with ways. In the main port Alexandriavisiting ships from around the world. Ports Port Saidand Suez linked Suez Canal. It is important to international tourism. Every year millions of tourists come to look at the pyramids - Pharaonic tombs and sphinxes - colossal statues of lions with human head, which built more than 4 thousand years ago. Relax on the beaches of the Red Sea offers Hurghada - The largest resorts in the country. 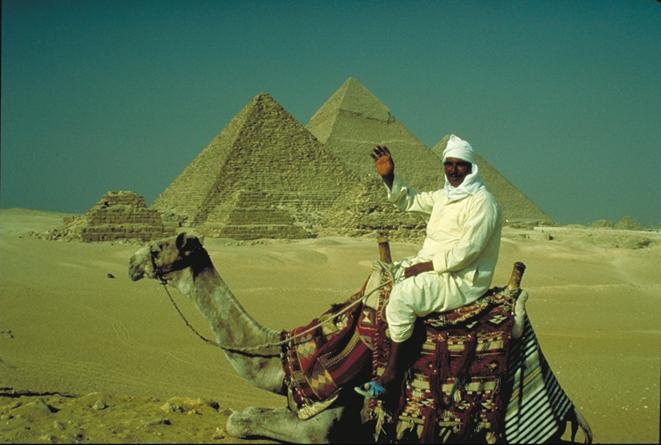 "All the money world will be here "

These words on the monument to Ferdinand knocked Lessepsu - French engineer who supervised the construction of the Suez Canal. Channel length of 161 km, a width of 120 - 300 m and 16 m depth, ten years built Egyptian workers. Opened in 1869, came into the world feed value. He became the shortest path between the ports of Europe and Asia. Many vessels carrying oil, coal, iron ore, grain and equipment, cut their way for 8 - 15 thousand km compared with the road dovkruzh Africa.

Nigeria. Country located in the lower reaches of the River Niger, on the coast of Gulf of Guinea. It has a wide outlet to the ocean. There was a time when the coast was called Slavish shore. With this name Nigerians linking the many tragic events. About Nigeria said that it was in Africa miniature: in the south are growing moist equatorial forests to the north prosterlasya savanna, which goes into semi-desert. In relief predominate coastal plains and low plateaus. There's year-round warmth. Subsoil rich minerals.

Nigeria - Africa's largest country by population. It is very cosmopolitan: there are 250 nationalities living people, each of which has its own customs, traditions and language. Most of the population lives in villages. 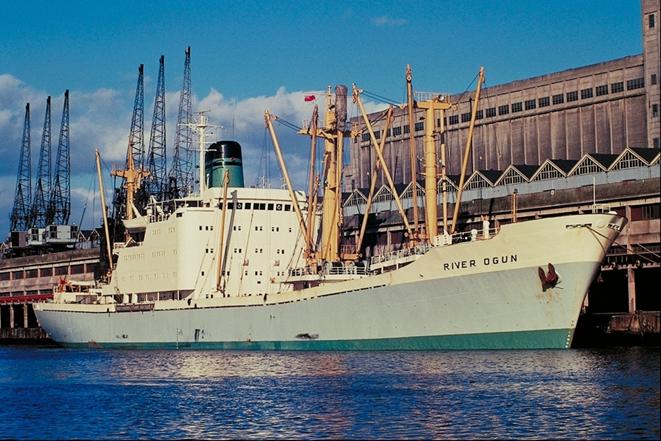 Fig. At a port in Nigeria

Ethiopia. Country name Ethiopia in translated from Greek means Face, the sun's heating.  Most of the countries located in the highlands of Ethiopia. It is an ancient country that remained independent even in the colonial period. Because of the high plateau, above which rise mountain peaks, passes East African zone faults. Because there are frequent earthquakes and volcanic eruptions. There are desert, savannah and highland areas with rich vegetation. Country inhabit Ethiopians, which includes several nationalities.

SOUTH AFRICA. This country - the economic giant of Africa. It is located in the far south mainland. The greater part of it are plain, stretched along the coast Dragon and Cape Mount. Warm climate - tropical and subtropical. Dominating savannas, are evergreen shrubs and tverdolysti forests and deserts. The country has very rich fauna, which is protected in numerous nature reserves and parks. South Africa called geological miracle - its very depths rich in minerals.

Indigenous peoples and the country is bushmen Hottentot. They left very little - only a few hundred people and now still in its development from prehistoric level. Most of the population are people who speak Bantu languages (Zulu, Ndebele, Xhosa, etc.).. The first Europeans who settled and founded a colony, were Dutch. Lately they joined the English. To work on plantations and mines were imported Indians і Chinese. So South Africa called kaleidoscope  peoples and cultures. There are just 11 official languages - to no one offense.

South Africa enters the twenty most developed countries. Prosperous country it was due to extractive industries. It  is one of the first places in the world for diamond, gold, asbestos, uranium. Yes, it is 24% stocks all the diamonds in the world, and gold annually produced 900 tons. The real sensation was reported that in the depths of the country lies more than half world reserves of platinum, manganese, chromium. Among other industries developed metallurgy, chemical, oil refining, light, food.

The basis of agriculture is a major farms owned by Europeans. They are widely used machinery and fertilizer, so get high yields. Wheat, sugar cane, cotton, citrus, grapes. South Africa gives half of all third of all corn and sugar produced in Africa. Alone fruits grown 140 species, which sell in 40 countries. Bred sheep cattle, pigs. Agricultural exposed to drought. Fishing (catch crabs, anchovies, sardines) - as a profitable industry economy. Good roads, a dense network of railways and air Encourage the development of transport sector. An African country has a highly developed education and health.

Great contribution to the state treasury does tourism. Mesopotamian vegetation and fauna are considered no less rich country than gold and diamonds. Saved in national parks so-called "big Five (buffalo, elephant, rhino, hippo, lion) and other animals do South Africa, a paradise for tourists (picture).

1. Why Egypt can be called "Countries in the arms of the desert? In which part of the country is concentrated mainly life?

2. What special nature and Culture of Egypt made famous in the world?

3. What did you learn about new Nigeria?

6.     Compare the economy of Ethiopia and South Africa.

7.     Which country in Africa you would like to visit? Why?