Remember that there were mountains in South America.

GEOLOGICAL STRUCTURE. South America, like Africa and Australia is one of the huge boulders that broke away from the ancient mainland Gondwana. At the heart of the continent is a long Precambrian South American platform. Its foundation made ancient crystalline metamorphic and magmatic rocks - schist, gneiss, granite. Over millions of years of plot maintain a base platform and raised, forming a deep and speeches (Panels). In a strong deflection accumulated sedimentary cover, which are large lowlands. On the boards, where the surface of ancient crystalline rocks are foundation, formed the plateau. As a result of movements of the platform was broken to individual arrays by deep cracks. They poured out lava to the surface, forming basaltic plateau.

From west to the South American platform adjacent Andean fold belt. He appeared on the verge two lithospheric plates, when the oceanic plate, plunging into the mantle, though "Plunged into" pidsunulasya under continental. This edge of continental plates jammed in the crease, creating Andes mountains. Over geological time, they destroyed, and then actively raised at the last epoch of Alpine horotvorennya. Therefore Andes - revived young mountains. They are among the most active seismic zones of the Earth. Raising and lowering some of their land and continue in our time.  Every 10-15 years in the mountains occur earthquakes accompanied by rockfall, landslides, snow avalanches. Along the faults, which split the mountain, many volcanoes are formed, which are part huge Pacific seismic zone. 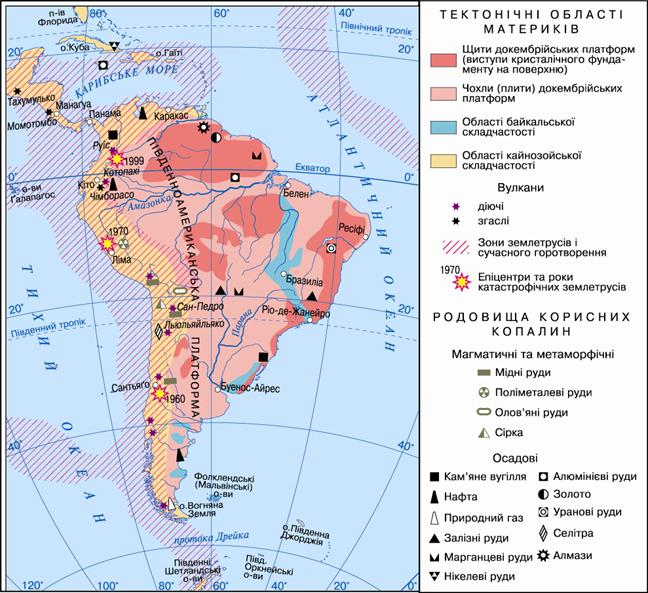 Fig. Structure of the Earth crust of South America 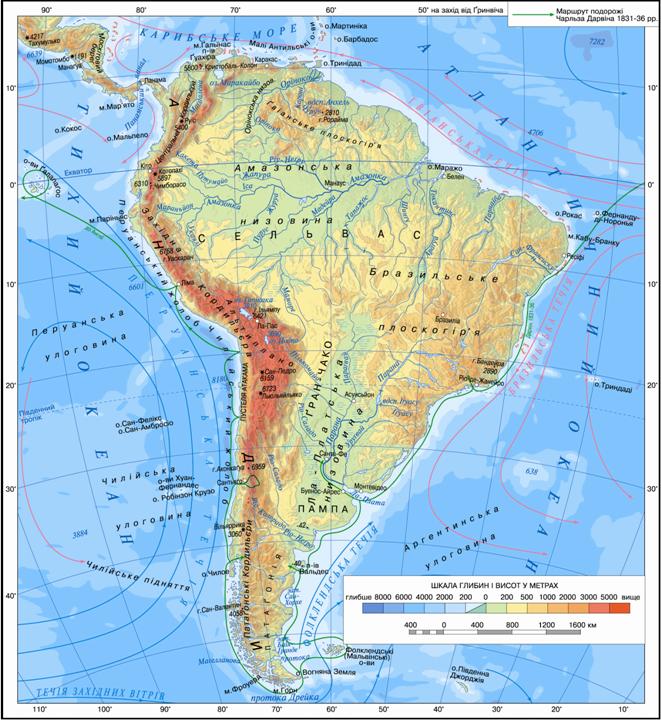 1.     What types of crust includes South American lithospheric plate?     In which direction it moves?

2.     At the edge where two lithospheric plates have the Andes?

4.     Name the landforms, which correspond to panels South American platform.

5.     What are the landforms of South America correspond fold belt? Provide examples of similar relationships terrain and buildings crust of Africa and Australia.

Relief. On the physical map of South America clearly distinguished two parts: the flat - to the east and the mountain - to event.

Relief plain east - Vast lowlands and the highlands - was formed on the old platform mainland. Lowlands - Amazon, Orinokska іLa Plata - are immense. All have flat waterlogged surface with wide and deep river valleys.

Large areas also occupied plateau - Guianaand Brazilian. They often consist of several plateau- Plots aligned with the surface, separated from adjacent areas precise steep slopes. In sandstones, which compiled the plateau, the river cut deep valleys, which appear at the bottom of many rapids.

On mountain west mainland placed great mountains Andes. In length they have unmatched, and high yield only by the highest mountains of Asia. Andes called "Spine" of South America. They stretch for miles along the 9000 the Western coast of the mainland, repeating its shape. Mountains are complex structure: they stretch a few huge bosses that they differ, then converging. Between the mountain ranges lying plateau. Many peaks exceed 6 000 m, while the highest - Aconcagua - Reaches 6960 mark of sharp peaks of the mountains, pikopodibni. Along deep faults rises a powerful panorama of volcanoes that occasionally poured around molten lava. In South America's highest and acting, and went out volcanoes in the world. Ongoing - Lyulyaylyako(6 723 m) San Pedro (6159 m) Cotopaxi (5897 m). Ebb - Ohos del Salado (6880 m) Chimborazo (6310 m). The highest mountains covered with snow caps and glaciers, which are year-round and do not melt even in near the equator. Through its vazhkodostupnist Andes and it is still poorly studied. 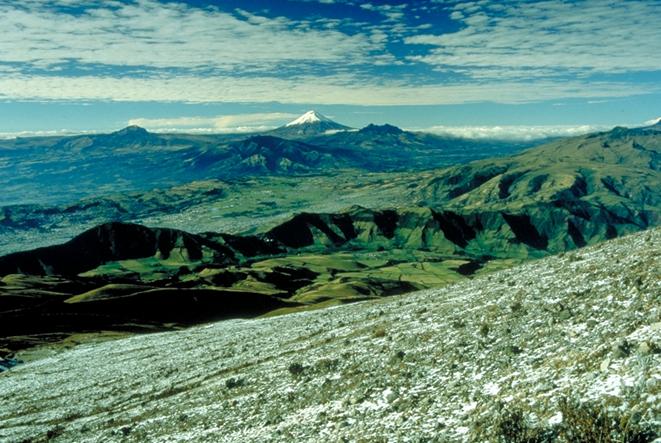 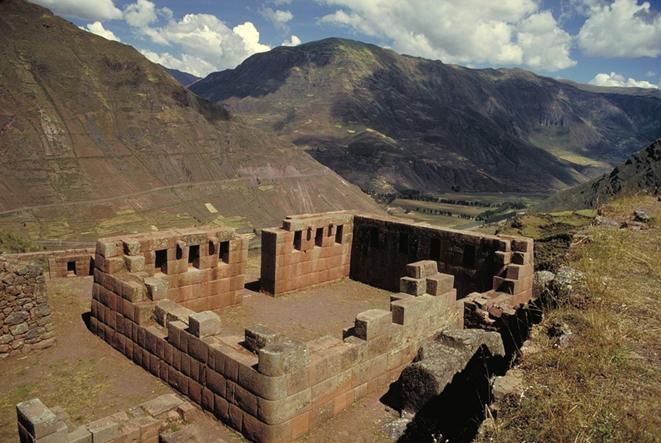 Minerals. What South America is rich in minerals, has been known since the time conquistadors who searched on this continent El Dorado - the mythical country of gold. However, if Europeans at first drew the precious metals, in our time of great importance have deposits of ores of nonferrous and ferrous metals, oil and gas. Nadra mainland very rich in various minerals.

The minerals are deposited mainly of sedimentary origin on the plains in sedimentary cover of ancient platforms. A lot of fuel resources - oil, natural gas, coal. In the tops of plateaus platform found rich deposits of iron and manganese ores.

Ores of nonferrous and rare metals - the main riches Andes Mountain. Leading among them is copper ores, of which smelted copper. And the name Andes, According to one version, the translated from the language of the Incas means Copper Mountain. The probability of such an origin of the name confirms the so-called copper onYas, stretching in the southern Andes of 4 kilometers, and the ability to smelt copper ancient Incas. His stocks are 20%  world. In central Andes stretches tin zone і polymetallic ore belt. In mountains concentrated as rich deposits of gold, silver, platinum, precious stones. With volcanic rocks associated sulfur deposits. 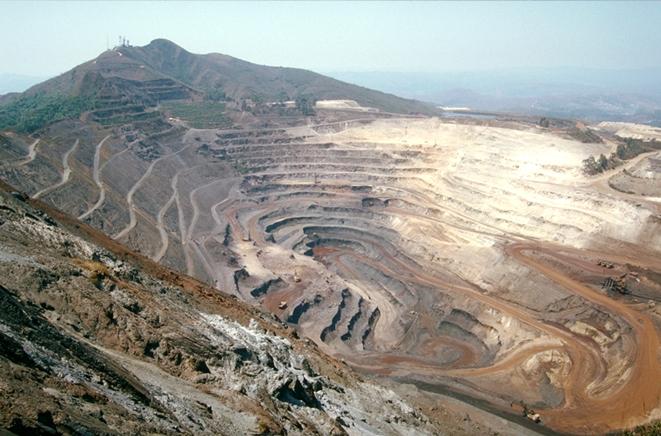 Fig. Iron ore in the Andes

'Point to America, conquistadors in vypytuvaly Indians, which are rich with gold edges. They learned that in Colombia, is a sacred lake Huatavita where Indians make muika sacrifice. The body of the leader daubed with resin adhesive, and several Indians through tubes covered him with golden sand. He turned to Eldorado (Spanish - gold-plated). Golden Lords floated on rafts loaded jewels, on the lake. He dropped into the water emeralds and gold figurines and zmyvav with a "golden skin. This lake in many years was the treasury. The first attempt was made to get the treasures back in 1545 then forced the Spaniards Indians draw water buckets, share them on the string and pour over the edge mountain ridge. It could reduce the level of the lake at 3 pm From the bottom of wetlands have received several items of gold. 40 years later took the Spanish merchant They made the lake water through the channel and found not only numerous gold ornaments and and an emerald the size of a chicken egg. However landslide blocked the channel and the lake again filled with water. In the 1900's an English company osushyla lake. But his vstylav bottom thick layer of silt. Soon the sun turned the mud to cement. Rain is again filled with lake water. Now the word figuratively called Eldorado fabulously rich place that keeps true or false treasures.

1. Why South America are more vulnerable to earthquakes and volcanism?

2. Compare the relief of South America and Africa. Identify similar and different features.

3. Explain the differences in relief and Western eastern part of the mainland.

4. Make a conclusion about the relationship between the location large relief forms and structure of the crust.

5. What patterns exist in the origin and placing Minerals of South America?