1. Think of origin name of the indigenous population of America - the Indians.

2. What are the outward signs are representatives of the Mongoloid race.

RACIAL COMPOSITION. By population - 320 million people - South America to yield populated continent except Australia. However, its composition is very complicated. It due to the history of colonization of the continent. From ancient times it was inhabited different Indian tribes (the Incas, Quechua, Aymara, etc.).. Indians - Representatives Mongoloid race (American branch). Scientists believe they are about 17 thousand years ago came from North America and gradually occupied the whole mainland. At the time of the discovery of America Europeans, some tribes were on the initial level of development and were hunting and gathering fruit, other - had developed agriculture and crafts. The ancient Indian state existed Andes. The final and most powerful was Inca empire, which had developed economy and culture. Priceless gift Indians mankind are corn, potatoes, tomatoes, pumpkins, beans, peanuts, which are now grown in many countries.

З ХVAnd art., From the discovery of South America by Europeans, there were usually settle Spaniards and Portuguese (european race). The conquest of the mainland brought their troubles many indigenous populations. During colonization by Europeans destroyed and looted the ancient monuments Indian culture, Indian vidtisnyaly of uncomfortable and life-land turned into slaves. This led to a sharp reduction of local residents.

To have someone do heavy work for the thankless plantations, which exterminate the Indians, in the XVI-nineteenth century. began to import slaves from Africa - Representatives Negroid race.

In the early twentieth century. migrated to South America and other people: Italians, Germans, Russians, Chinese. Among the settlers were many and Ukrainian people, who settled mainly in Argentina and Brazil. So South America populated by representatives of all three major races of mankind. 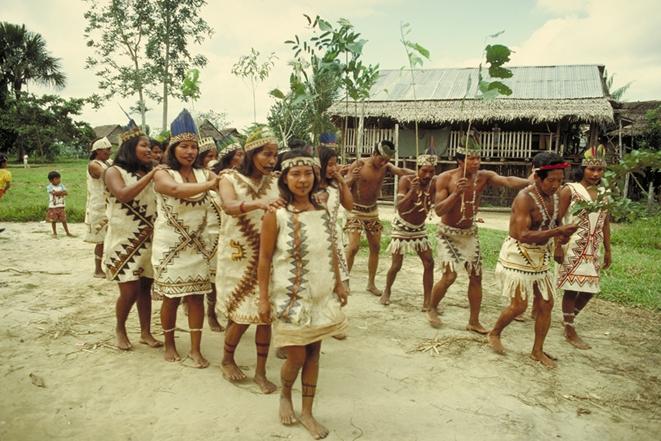 It was called the Inca state, which appeared in the tenth century. in the Andes and stretches from north to south at 4000 km. There were many cities and villages, temples and palaces. Capital - Cusco city (translated as "navel", ie Center) located at a height of about 4 thousand more lived there population than in the largest city in Europe - London. Incas cultivated potatoes domesticated llamas and alpaca, which supplied wool and carrying loads. They had irrigation channels and water pipes. Inski masters have created unique products from gold, silver and copper, which caused the Europeans delight. Incas knew astronomy, physics, geometry, medicine. Their life was full of spirituality - it evidence  myths, festivals, music and singing. In 1533 Spanish conquistador Francisco Pizarro led the aggressive campaign against the Incas. Spanish fraudulently captured the supreme leader. Notwithstanding that the Incas paid a huge ransom in gold, and martyred leader turned Peru to the Spanish colony.

FORMATION MODERN POPULATION. As the continent was populated by representatives of all three major races of mankind, modern population of South America is motley. Over the centuries common existence of Indian, European and African nations as if caught in giant melting pot and mixed together. So now on the mainland prevails mixed population - offspring of mixed marriages: Europeans and blacks - mulatto, Europeans and Indians - Metis, Indians and blacks - sambo. However, racial features mixed language, customs, rituals and traditions. The result formed new nations (eg, Brazilians), on whose lives are closely intertwined Indian, European and African culture.

However, the identity of South America stored in Indian languages, architecture, fine art, clothing, musical rhythms, traditions majority population of South America says Spanish and Portuguese. Both appeared on the basis of ancient Latin prevailed in ancient Rome. Because South America together with Central America, where these same common language called Latin.

and even culinary tastes. 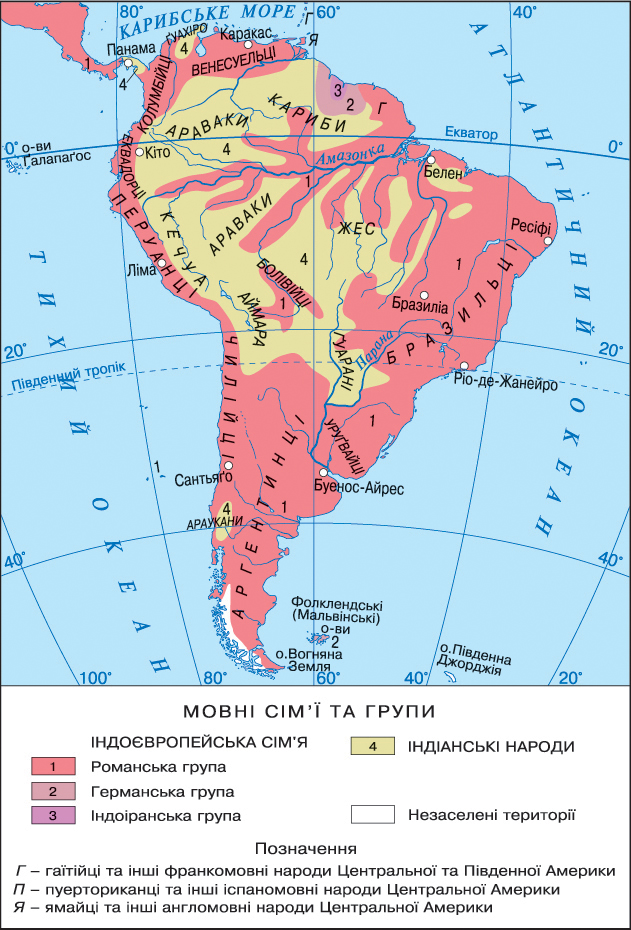 Fig. The peoples of South America

The originality of America

Uniqueness America is the mixing of different peoples - Indians, Africans, Europeans, Arabs - all builders of the new continent. It has become common work of both those who lived there long, and those who came there from somewhere in the call of destiny, aspirations and hopes, and those born in the New World - children of history itself.

ACCOMMODATION POPULATION. The area of South America population is very unevenly placed. Much of it focuses on oceans and coasts Andean highlands. Population density areas and 100 people / km2. Large internal area almost deserted. This division population associated with the history of settlement and natural conditions of the mainland.

1.     Identify areas of greatest and lowest population density. Please specify in which countries they are.

4.     Is the mainland countries not locked to the seas and oceans? Name them.

POLITICAL MAP. There South America are not many countries in Africa. They number 14. Most of them were colonies of Spain and Portugal and gained independence only the early nineteenth century. (Fig.). Unlike the African countries from colonial oppression they retired before because the level of management in these higher. But they all belong to the group of developing countries. Each South American countries of different size of its territory, population, natural conditions and natural resources. The biggest lie in plain east - Brazil, Argentina, Venezuela. Large territory and natural resources are Andean countries - Chile, Peru, Colombia, Bolivia, Ecuador. 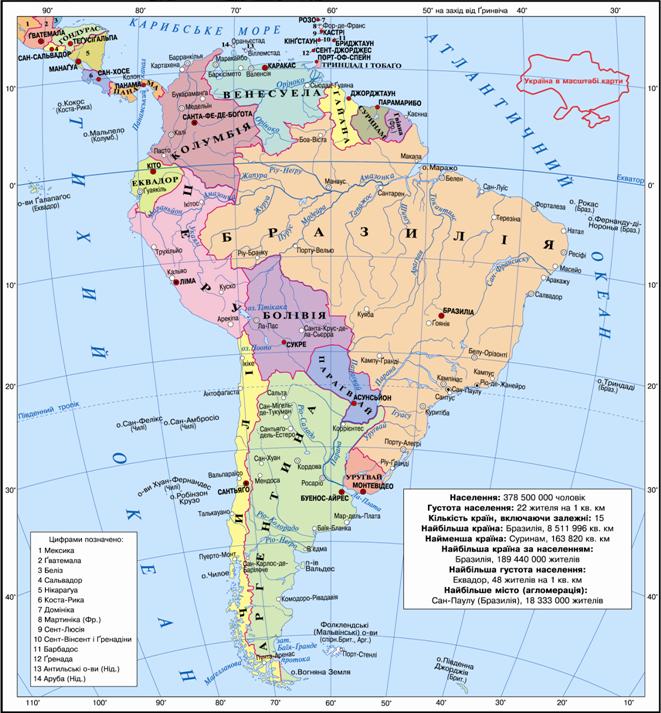 1. What relationship exists between discovery of South America and the composition  its population?

3. Tell us about contemporary population of South America.

4. What languages are spoken in South America? Why is that?

5. What are the features geographical position of South America?