GEOLOGICAL STRUCTURE. Unlike South America,  millions of years ago was part of Gondwana, North America - piece Lavraziyi - Northern Hemisphere ancient continent. The basis North America is a long Precambrian North American platform. To the northeast of its crystalline foundation made granites and gneisses, comes to the surface as Canadian Shield. In the rest of offset by a strong foundation thickness of sedimentary rocks (sandstone, limestone).

From all sides to the platform in different geologic time were "Built on" orogen. In particular, strong folding formed on event at the point of Pacific і North American lithospheric plates.

Over 10 thousand years ago the climate of the Northern Hemisphere was much stricter: the snow that dropped out during the long winter, not had time to melt and nahromadzhuvavsya. Gradually it turned into ice. As a result of north of the continent created a huge glacier covering. Hundreds of years he moved south on uneven mainland. In the great and the ice vmerzaly small fragments of rocks (boulders, schebinka, sand, clay) that moved with glacier. Moved south, the glacier stopped and the warming climate melted slowly. In areas where there has been glaciation, glacial landforms were formed. 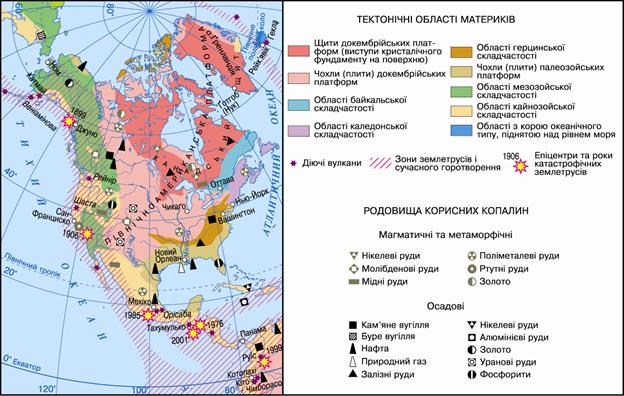 The bridge between mainlands

Interestingly, only 30 thousand years ago in place Bering Strait was the isthmus that North America was connected with Eurasia. Existence this "bridge" between the two mainland confirmed their similarity of vegetation and fauna. 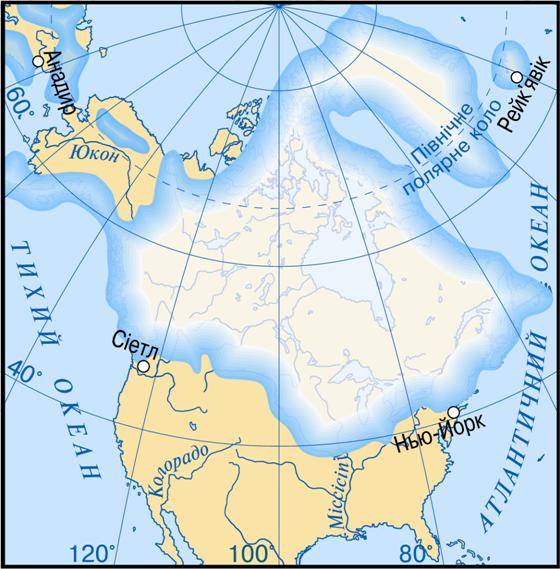 RELIEF. In general relief similar to North America terrain of South America. In North America, as in the west tower mountains and widespread in eastern Great Plains.

Plains, lying on platforms occupy the entire eastern part of the mainland. The largest among them - Lavrentiyska height - located in the north and a wide strip frames Hudson Bay. South placed Central Plains, having a hilly surface. Thousands of kilometers from north to south stretch Great Plains.Towards the west of the mountains they climb the giant stairs. On the surface plain old ice in the past  which covers these areas has created a glacial landforms - polished rocks, hills with smooth tops, accumulation of large boulders, vyorani basin. In the south of the mainland is Prymeksykanska lowland з flat, heavily waterlogged surface densely river valleys.

Mountains occupy only a third of the continent. They are confined to the orogen. Appalachia - Fold-hat mountain in violation of plainness in the east of the mainland. They are old age, so much destruction and low. Their gentle slopes and rounded peaks.

Cordillera - One of the largest on the planet folded mountain systems. They stretched from north to south across the whole mainland in 9000 km. This mighty mountain zone and continues in South America as the Andes. The highest peak is the Cordilleras Mount McKinley (6 193 m). It is located in northern mountains, where peaks covered with snow and glaciers. Cordillera stretching several parallel ridges and consist of different high mountain ranges. East forms a chain of ridges Rocky mountains. Internal parts of the Cordillera are numerous plateaus and highlands - Large Pool Colorado Mexican. They  dissected by deep river valleys, which are called canyons. Cordillera mountain youth, their formation continues today. In the mountains many existing and extinct volcanoes. The highest of them - Orisaba і Popocat - rise above 5000 m. The Rockies extended geysers, hot springs, mud volcanoes. 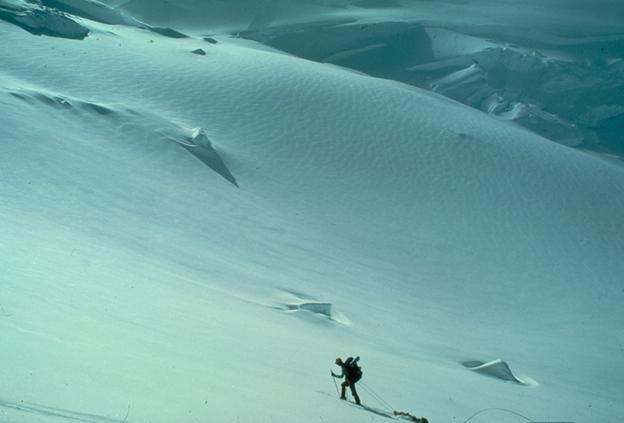 In 1871 the Rockies "for the benefit and satisfaction people was established first in the world National Park - Yyelloustonskyy. In it concentrated more than 200 geysers. The highest of them - Steamboat Geyser, which emits water to a height of 100 m. The same "water content" has a giant geyser, which at one time spew almost 38 thousand hectoliters of water. Striking and puddles of boiling mud, painted in green due to algae that live in them. 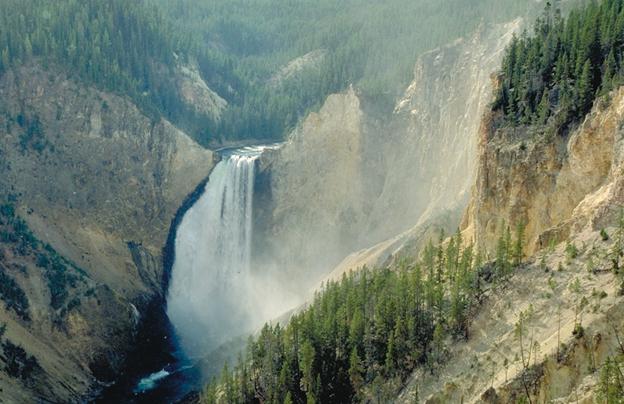 2.     Where mountains are located? Which ones higher?

3.     What altitude are the highest mark Appalachia? They belong to the mountains in height?

4.     In which part of the Cordilleras posted the highest peak?

5.     What minerals are deposited on plains?

6.     What are the minerals mined in the mountains?

USEFUL RESOURCES. Minerals in North America found throughout its territory. In the north there are large deposits of iron, copper, nickel, uranium and polymetallic ores. All of them are confined to magmatic rocks of the Canadian Shield.

Cordillera as rich in sedimentary and igneous resources. In California and Alaska are known the world deposits of gold.

1. Set the similarities and differences in geological structure of North and South America.

2. Explain the location of large forms of relief in North America. Why are located in the western Cordillera mainland?

3. What kind of a relief on the plains ancient glaciers formed?

4. What minerals confined to the ancient sedimentary rock platform?

5. What does the presence of  volcanoes, geysers, hot springs in Cordillera?