1. Remember how joins the mainland to a large extent of its climatic conditions.

2. What are the current pass near the shores of North America?

KLIMATOTVIRNI FACTORS. A considerable length of North America from north to south gives rise to significant differences in of solar EnergyThat reaches Earth's surface. It receives a number of minor northern part of the mainland, because temperatures there during most of the year negative. Most amount of solar energy comes in the southern parts of North America, so there heat in summer and winter.

Great impact on the climate makes circulation of air masses. Over Mainland dominated cold and dry Arctic air masses, moderate (Continental and marine) and tropical. In their moving large role Northeastern polar winds, west winds moderate latitudes and north-eastern trade winds. However, the impact of western transfer of air masses from the Pacific limited to the coast and western slopes of the Cordillera. Instead, cold Arctic mass can freely penetrate far south, and warm tropical in the south - far north.

The meeting of different air masses that have large temperature difference generates tornadoes (tornadoes). Tornado - A powerful atmospheric vortices between thunderstorms cloud and earth. It looks like a dark column of air that is spinning with bell-shaped extension on the top and bottom. The air in a tornado rotates at a speed of 100 m / s and rises to spiral upwards, pulling in dust, water, and sometimes very large objects.

In the south formed tropical cyclones (Hurricanes) - Very powerful atmospheric vortices emerging in tropical latitudes over warm ocean areas. In the center of the cyclone is area of low atmospheric pressure. The air rapidly turns his dovkruzh Center and goes up. As a result, created a powerful Cumulonimbus clouds, where raging showers and thunderstorms.  Wind speed in the cyclone reaches 200 km / hr. In But the very center of a tropical cyclone occurs "brown eye" - the region clarification diameter of 20-30 km, where there is almost no wind. The hurricane moved quickly to dry land (at a speed of 400 km per day). He brings such showers that resemble waterfall. Only one day can fall as rain, but in moderation latitudes for the whole year. Hurricane wind raises huge ocean waves height of 5-storey building. They obrushuyutsya the coast, causing floods, and terrible destruction, loss of life.

Laying surface - Relief and ocean currents - the distribution of heat and moisture mainland. Because of flat terrain for much of the mainland opened influential Arctic Ocean and the Atlantic. Instead of the high Cordillera impede the penetration of western humid air masses from the Pacific Ocean. On climate affect coastal currents: warm (Gulfstream, Alaska) Perform oteplyuyuchyy outlet, cold (California, Labradorska) - Cooling. 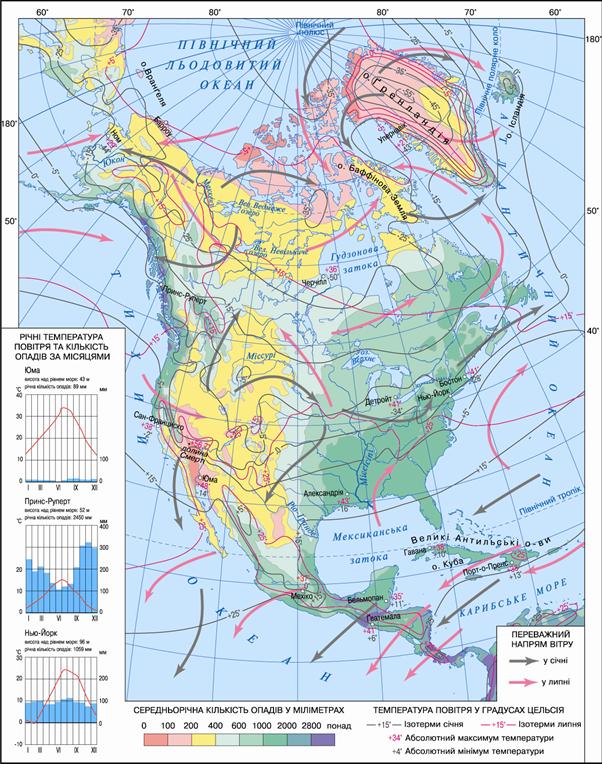 In the twentieth century. to get just share information about hurricanes, the strongest tropical cyclone meteorologists give names: the northern hemisphere cyclone - Women and southern Hemisphere - for men. "Fruitful" for tropical cyclones in 2005 was one of fiercest storms of the year that struck the coast of the Gulf of Mexico, was "Katrina". People from the coast were evacuated to safe places. And despite the cautionary measures destruction and casualties among the population was very large. 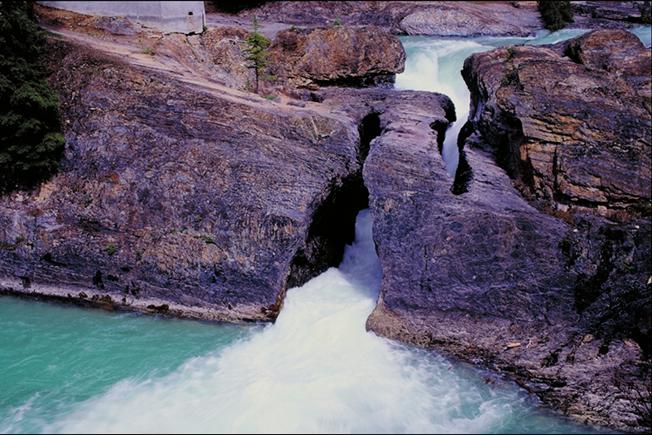 SEASONS OF THE YEAR. In winter strongly vyholodzhuyetsya mainland. By dominates the northern polar circle polar night. The average temperature in January northern region of -30? -40 0S. Cold air penetrates far south. However, in the southern mainland temperature in January is 16? 24 0C. Sometimes the cold Arctic air masses can move up to the Gulf of Mexico coast, while in the south are cold, accompanied by snowfalls. Often this short-term reduction temperature leads to loss of harvest oranges and peaches or even Kill the trees. Sometimes the reverse - the warm air from the south to spread far north, bringing thaw.

Climatic zones TYPES AND CLIMATE. North America lies in the six climatic zones, which were formed within several climatic regions.

У Arctic zone dominate year-round dry and cold Arctic air masses and Northeastern polar winds. Winter is long and very cold, average temperatures air reaches -40 0C. Summer is kept cold weather with temperatures of up to 5 0C in August, already snow falls. Rainfall small - up to 250 mm per year, so there are no large snowbanks. Strong winds cause staggers. Arctic climate is very severe due to combination of low temperatures with strong winds.

У subarctic zone air mass change in each season: winter dominate the Arctic, summer - moderate. So as winter cold and long with temperatures up to - 30 0S. Summer is cool (10 0C), but more prolonged than in the Arctic zone. The rainfall increases to 350 mm per year.

У moderate zone year-round mild air masses dominate and west winds. Winter cold  summer is warm. Because of considerable length of belt from west to east within it there are climatic differences, as are three climatic region. The event generated maritime climate with mild winters and cool in summer and highest rainfall (more than 2 000 mm). On formed east monsoonal region Climate with cool summers. Inland areas - is area of climate with cold winters to - 25 0C and warm summer  20 0C and least in the rainfall belt.

У subtropical zone moderate winter air masses dominate the summer - rain. Due to considerable length zone from west to east in it, as in moderate, there are considerable climatic differences. In Mediterranean region winter moisture and relatively warm summers are warm and dry. In Continental region and winter and summer reigns dry air, winter temperatures exceed 0 0S, summer is 25 0C. monsoonal climate region summer monsoon, that blows from the Atlantic Ocean, bringing heavy rains and winter monsoon, which blows from mainland towards the ocean, the coast brings dry and cold air from inland areas.

У tropical zone climate of the Pacific and Atlantic coasts also different. The event generated region desert Climate. There is hot and dry, despite the dominance of marine air. This is because of cold California current, which cools air and prevents the formation of rain clouds. In the east there region wet climate - Hot and humid as a result of trade winds, which bring rain and summer

У subekvatorialnomu zone climate is always hot and humid. In summer there come equatorial air masses from the south and bring plenty of moisture from Pacific. In winter, warm and moist air masses come together with north-east trade winds from the Caribbean. 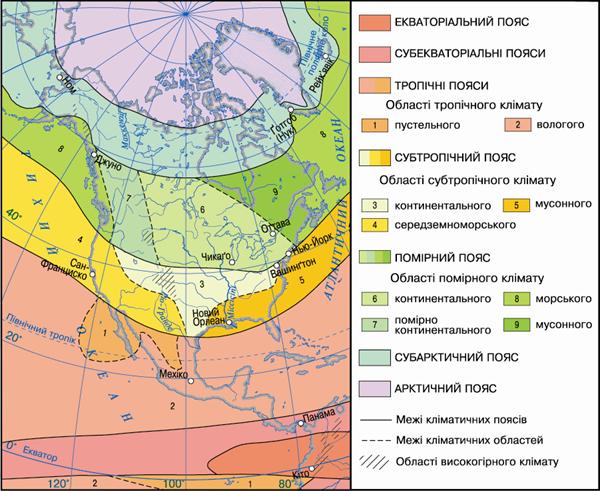 1.     In which climatic zones is North America?

2.     Which of climatic zones is the largest area?

3.     What are the climate zones are divided to climate region?

4.     What climate region distinguished in the temperate zone? How different climatic conditions of these areas?

5.     How are the Air territory of the mainland. Where and why they fall in?

1. What areas of North America receiving the largest number of solar energy, and that - the smallest? Why?

2. Which air mass is formed North American climate and winds that moved them?

3. What is the impact on circulation air masses carry large landforms?

4. In which areas of Northern America threatens the emergence of tropical cyclones?

5. Explain the causes of climatic regions within the same climatic zone?