2. In which ocean basins rivers are in North America?

RIVER. North America has many large rivers flowing. Longest and most affluent among them is the river that belongs to the pool Atlantic. They have a wide valleys, flat nature and flow mixed (rain and snow) power.

The largest river in North America - Mississippi. Its length, together with Missouri is a tributary of 5971 km. This is one of the longest rivers on Earth. It originates in the northwest of the Central Plains. At confluence Gulf of Mexico makes it one of the largest deltas in the world that nominated annually in the Gulf approximately 100 meters when melting snows in the mountains or when the rains come, Mississippi comes from the banks and flood the fields and villages. For flood protection levees were built on the river and outlet channels. Together with its major tributaries of the Mississippi River forms a huge river system.

Right tributaries of the Mississippi River, which flow arid territory, bring her a little water. Most of them - Missouri.  For the length it surpasses the Mississippi, however, is much less water. Major role in its power play rains have some value and the snow falling in the mountains. Therefore, spring and summer of torrential rains and melting snow are strong flood. In other periods Missouri milli very little water and convey to the Mississippi. Flowing north-south river erodes clay rocks, because its waters are filthy-yellow. For this, the Americans jokingly call her "fat brudnuleyu.

Instead, the left tributaries of the Mississippi River flowing over year. The largest left tributary - Ohio – begins in the Appalachian Mountains and crosses from east to west The central plains. It increases the amount of water in Mississippi almost 1,5 times. Most river is flowing during the summer monsoon rains.

Mackenzie - The largest river basin Arctic Ocean. In the upper reaches it and has stepped mountain character, while the bottom - flat. The river is mostly snow supply. In cold season she icebound. Falling into the sea, it forms large delta.

Rivers of North America are used to shipping. They need water to numerous industrial companies and irrigation. Mountain rivers with large hydropower resources for hydropower production they built dams and hydropower, made reservoirs. 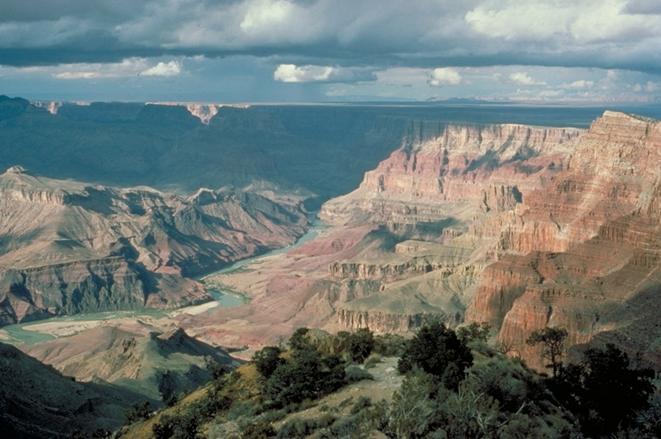 Names of major rivers of North America gave Indian tribes who lived on their shores. Yes Mississippi translated means great river, Missouri – large troubled river, Ohio – beautiful. A river Mackenzie named after Scottish traveler-explorer Alexandra MackenzieThat in 1789 the first of the Europeans swam after her canoe. River ColoradoSpanish conquistador was opened and named them the Rio Colorado - Red River.  When the snows melt in the mountains, river water filled with vague reddish particles of the rock and give it a hue.

LAKE. In North America, many large lakes. Their hollow different origin. In the north of the mainland have large lakes faults, deep ancient glaciers.

The biggest of these is Great Lakes. They justify its name as belonging to the largest freshwater lakes world. Great Lakes – a system of five lakes, connected short but wide river-straits. ОSuperior Zero- Largest freshwater lake in the world. It is the deepest (397 m) of large lakes. Short river (121 km long) connects it with оzerom Huron - The third largest freshwater lake in the world. It is, in its turn, is connected with two lakes: Lake Michigan and Erie. Lake Michigan connected not only with other lakes, but shipping channels of the Mississippi river system. Lake Erie Niagara across the river has connection with Ontario - lowest among the Great Lakes. Niagara, zryvayuchys the ledge width 1200 m and falling from 50-meter height, forming the world- Niagara Falls (Fig.). The Great Lakes are fed by waters of rivers that flow into them, and by St. Lawrence River should flow in Ocean. Lakes are of great value carrier, in passages between them built great power. 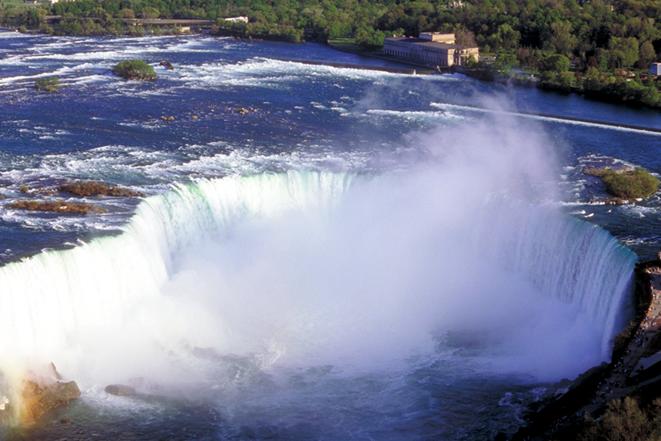 The largest lake of tectonic origin in North America is Nicaragua, located on the southern mainland. It was formed on the spot Gulf, which completely separated from the ocean as a result of raising the earth's crust. In the Cordillera widespread glacial lakes and volcanic origin. There are shallow remaining lakes - remnants of large reservoirs that existed in the past when more humid climates. This is Great Saline - Closed and shallow, could change its area and salinity depending on how much rain falls.

Names of the Great Lakes gave Indian tribes the Iroquois, who lived on their shores. Yes Michigan translated means big lakeAnd Ontario – beautiful lake. Erie - Name irokezkoho tribe. Great Salinity lake not a chance name. Salinity of water in it 9 times higher than the sea. It can be compared to salinity in three-liter jar, into which emptied kg pack of salt.

Lake of volcanoes and sharks

Lake Nicaragua is interesting that there are living marine fish: shark, swordfish and fish drunk. It was formed in place of marine bays and then gradually oprisnylosya waters of rivers. Fish is pryzvychayilysya to new conditions. In addition, the lake has over 300 islands with extinct and active volcanoes.

2. Why rivers are short and the Pacific have turbulent flow?

3. What are the origin of lake basins of large lakes North America?

4. Prove that Great Lakes is the only system of reservoirs.

5. Using a map, determine where the watershed between river basins of the Arctic, Atlantic and Pacific Oceans. Compare mode and nature of the flow of rivers of different pools.

Fold characteristic of one of the rivers of the continent, using the plan:

1. In which part of the mainland runs.

2. Where rises and falls where.

3. In which direction flows.

4. As the nature of the flow depends on the terrain.

6. View of the river and its dependence on climate.