FEATURES Settlement of North America. The first people came to North America, as scientists believe, from Asia on land bridge thousands years ago there was a place on the Bering Strait.  Therefore, indigenous peoples - Indians та Eskimos – belong to Mongoloid race. Evidence that Indians had originated Asia there are numerous trappings: dark skin with reddish tinge, the hard straight hair, dark eyes, broad face. Numerous Indian hundreds of tribes speaking different languages. They worked in different business activities: Eskimos in the north - to hunt marine animals, fishing, Deer farming, harvesting Pushinoy; Indians in the woods - hunting and fishing, and in the south - in agriculture, animal husbandry, handicrafts (weaving, weaving, ceramics). The bulk of Indian tribes has been concentrated in Mexico (Aztecs, Mayas), which formed large states with relatively developed economy and culture.

З ХV Art., after the discovery of America by Columbus H., on the mainland began to arrive migrants. Time began colonization of the continent Spanish, English, French- Representatives european race.Their resettlement in new lands was accompanied, as in other continents, destruction and ousting of little value for life on the land of the indigenous population. Representatives Negroid race – Africans - As in South America, were brought in XVІ–ХVIII. as slaves to work the plantations.

In the Northern dokolumbovi America in the center and north inhabiting such a great group of Indian tribes as atapasky (Apache, Navajo) mohawk; in the south - Maya and Aztecs. Aleut - numerous nations (of about 3 million people) - native people of Alaska and Aleutian Islands. Eskimotranslated from one Indian language means he who eats raw meat. Most Inuit believe that name offensive and call themselves InuitWhich translates simply - people.

MODERN POPULATION. Now living in North America 460 000 000 persons. Of the various peoples and races have developed new nation with their traditions - Americans U.S., British and Canadians et al. Among them the descendants of immigrants from Europe: in the U.S. - mostly immigrants from Britain, Canada - with the Great Britain and France, in the south of the continent - from Spain. Therefore, the state language in Countries are English, French, Spanish. During the last century in search of new land and a better life in North America settled many Ukrainian people. And so far come to the mainland every year about half a million people from all over the world.

But Indigenous people make up only about 1% of the continent. Most of the Indians living in Mexico and Central America, and Eskimos - On the coast of Northern Arctic Ocean and south of Greenland. The indigenous population speaks many languages. They also live in North America millions of different generations peoples of Africa - African Americans. As mixed Marriages appeared Metis and mulatto. Thus, the population of North America was formed with representatives from all three major races of mankind. 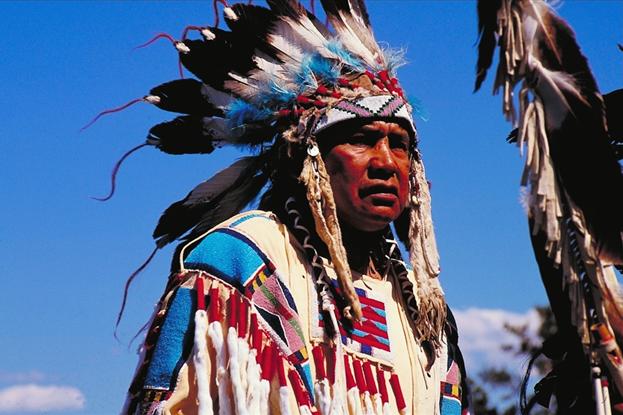 Takes places the population at the mainland is extremely uneven. This influenced the history of colonization of the continent and its natural conditions. The highest population density in the south and east of the mainland, where settled first settlers from Europe. The lowest density - in Greenland, northern and western desert areas, few are suitable for life. North America called "mainland cities, as they live Mexico City New York, Washington, Chicago, Montreal et al.

Fig. The peoples of North America

End XV Art. State Aztecs took the central Mexico. Its capital  - Mexico City-Tenochtitlan - was then one of the biggest cities.  Spoluchalysya highland empire centered network paths. Excellent farmers, the Aztecs grew corn more than 7 thousand years ago. We owe them not only in this culture. From Central America to come to us cocoa, peanuts, tomatoes, peppers, beans, cotton, pumpkins, watermelons. Among pets Aztecs kept queer turkeys.

Maya created a highly developed country on the peninsula Yucatan back in pre BC. BC They were known for their achievements in astronomy - were able to predict solar and lunar eclipse, in mathematics - set up a complicated system account and come up with the number zero in construction - erecting huge buildings and the city.

The political map. In North America is the most developed countries of the world - United States. Вysokyy level of management must also Canada. The rest, mostly small- area, belongs to a group of developing countries. Among them, more high development features Mexico. The largest island in North America - Greenland - is the European the state of Denmark. On the islands Caribbean island located ten States most of which are Cuba і Haiti. There still remained a colony USA Britain, the Netherlands.

The Central America together with all countries South America form a region, called Latin America. The population of this region speaks mostly Spanish and Portuguese - languages which are of Latin origin. 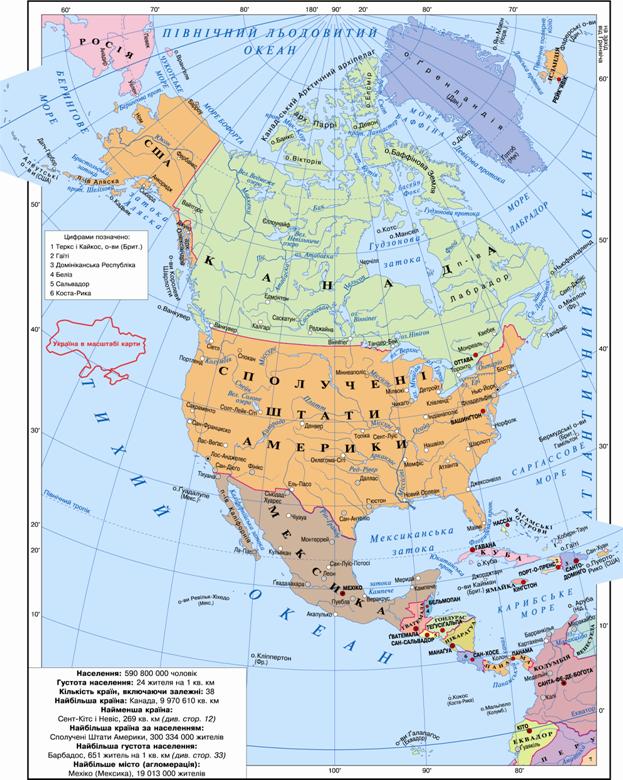 1. What are indigenous peoples residents of North America?

2. The nations which make up races came to the mainland population?

3. Name the causes from which allocation of the population depends on the mainland.

4. What are the major countries are in North America?