§ 53. The countries of Southern Europe (textbook)

§ 53. The countries of Southern Europe

2.     What states existed on ancient shores of the Mediterranean?

The largest countries of Southern Europe is Italy, Spain, Portugal and Greece. In addition there are large and tiny state - Vatican, San Marino. All of them are located in large peninsulas. This is the most mountainous part Europe, where in our time active volcanoes. Southern Europe, which have evolved and ancient state, called the cradle of European civilization.

ITALY. Italy - One of the oldest countries. More than 2 thousand years its territory was center of the Roman Empire. Its name comes from names of the tribes of the Apennine peninsula - Italian. Italy wasozmischena on Apennine peninsula form which often compared with boots. Italy also belong Sicily Island and Sardinia, that in the Mediterranean.

В nature the country is mountainous and the eternal snows tops, and warm south. Italy has mostly mountainous terrain. In northern high rise Alps, Low Apennines cross the country from north to south. Horotvorchi process is not yet finished, and relate earthquakes and volcanism. In the south is one of the most Volcanoes of Europe - Vesuvius. Because its eruption in 1979 BC. BC killed three cities - Pompeii, Herculaneum and Stabia. Nowadays Pompeii partially exempt from layers of lava and volcanic ash and converted into a museum. In Sicily rises Etna -Highest active volcano in Europe 3340 high mountains of Value for the country associated with the use of forest resources and mountain tourism. On plains, the largest of which Padanska, development of agriculture.

This contributes to a subtropical Mediterranean climate with mild, wet winters and hot summers. It is considered very comfortable to human health. Rivers are short and Italy are mountain character. They notorious for its floods, which sometimes have catastrophic consequences. По - The country's longest river, the Tibri Rome stands. Natural Place tverdolystyh evergreen forests and shrubs that are typical for the Mediterranean took  agricultural lands with cultural subtropical species.

Population homogeneous country by ethnic composition: 98% are Italians. Most of the population lives in cities. Rome - The capital of Italy - one of the oldest cities in the world. Part it takes miniderzhava Vatican.

Italy is among the most developed countries. The basis of its economy is industry. His minerals is not so much because it imports many raw materials from other countries. Producing polymetallic ore and mercury, which is the raw material for ferrous metallurgy. Italy is famous for a variety of color marble which is extracted from ancient times and used as facing material. Well developed various machinery industry: shipbuilding, electrical, electronic. Plants "FIAT" produced cars. Chemical industry is plastics, synthetic fibers and others. Developed light industry - Italian clothing and shoes valued worldwide. City Milan is an international center fashion. Food industry processes agricultural products. Worldwide fame with Italian wine and pasta. In particular, spaghetti considered the first national dish, known far outside the country. An important part of the Italian economy is the service sector: education, health, finance, management and tourism.

The leading branch Rural Economy is a crop and main crop - grapes. Italy - a world leader in its growing and wine production. Large covered with wheat, which goes to making pasta. Also cultivated maize, rice, sugar beets, vegetables. But his most famous Italy fruits - apples, pears, peaches, cherries, figs, oranges, lemon. Therefore, it is called "main garden" of Europe. Italy is the world producer of olives and olive oil. On the plains and foothills of the great divorce cattle, pigs and sheep. As a maritime country of Italy has developed fishing, it leads fishing tuna and sardines in the Mediterranean.

Developed all kinds Transport: road, rail, air, sea. The main seaports are Venice, Naples and Genoa - port, the birthplace of Christopher Columbus. The main commodities that Italy sells to other countries, are transport tools, products of the chemical industry, food, shoes and clothing. Large country receives income from foreign tourists, attracted by the historical monuments, Mediterranean beaches and opportunities for winter activities Sports.

In the Italian city of Pisa is a unique architectural structure - falling tower. Its construction began in 1173 and lasted almost 200 years. But early work by drawdown of ground marble tower has deviated from the vertical axis. Now it deviation reaches a height of 5 meters to 55 meters Leaning Tower of Pisa not fall, it is necessary to engineering. 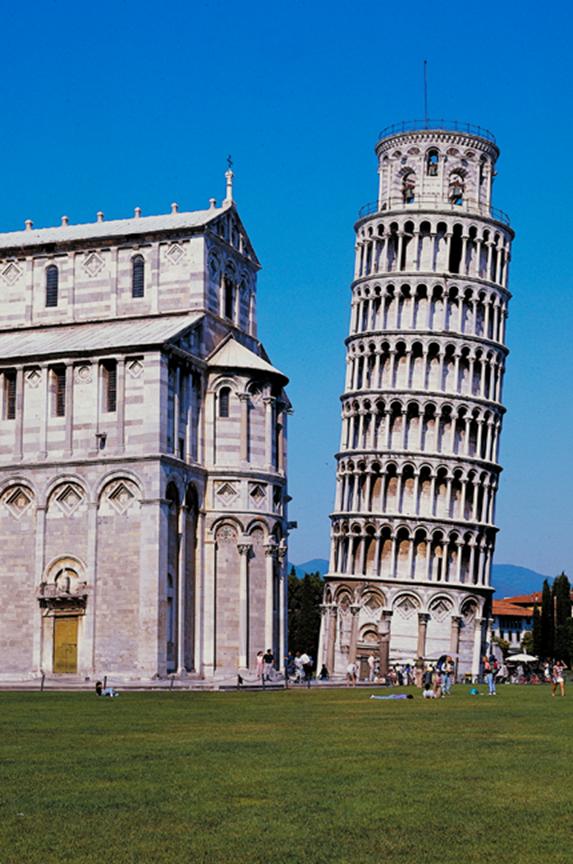 Italian Venice called one of the most amazing cities. It is situated on 118 islands in the Gulf of the Adriatic Sea. All urban life here goes on the water. Once upon a single vehicle Venetians was the gondola - a narrow wooden boat custom shape. Do it could only very skillful artist, so the gondola cost more than car. Now they vozyat many tourists. Venetians themselves will use cheap plastic motor boats. On the boats go by work in the shop a visit. On boats delivering goods and scavenges. There are special boats ambulance, fire and police. 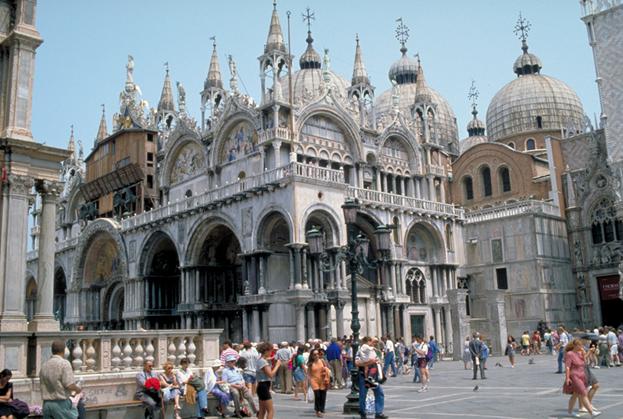 Fig. In the center of Venice

STATE-"Dwarf". In Italy positioned very small in area and population of the country, called mini-states or by the "midgets".

Vatican City - smallest country in the world. This state called the "city within city" because it is located in the middle of Rome - the capital Italy. Vatican City is surrounded by walls of the medieval walls. Inside are three inputs that are protected by guards. This unique country is the seat of the Pope Roman - Head of the Roman Catholic Church. Its population - these are the priests and people working in the papal palace, library and museums. The state has its radio, television and banking system. It has its own railway and Navy. Miniature Vatican area contains many historic monuments and museums. Among them St. Peter's Basilica, built in XVAnd art. Which is the most famous Catholic church in the world, and the papal palace of the famous Sistine Capelli. Library contains 67 thousand ancient manuscripts and more than 1 million books. In museums concentrated unique art treasures, look at that Tourists come from around the world. An important source of income of this country is pilgrims - the believers who come to the "holy places". In 2001 Pope first visited Ukraine.

San Marino located within Italy, its central-eastern part of the foot of the Apennines. According to legend, San Marinofounded in 301, the sculptor-mason Marin. Subsequently announced his holy church, and the country received its name.

About the size of the country indicates the length of its borders - 34 km! The leading sectors of the economy are agriculture and tourism. Sanmaryntsi wheat and grapes, raised cattle and pigs. Food industry produces cheese. State Treasury of this tiny country replenished by the tourists who are attracted by scenic views and medieval castles. Special items of income are sale of postage stamps San Marino stamp and coin money, which is prized collectors in worldwide.

2. What natural features of Italy favorable for life and business Rights?

3. Why is Rome called the world's center Tourism?

4. Which state is called "country in? What you know about it?