LABOR RESOURCES. The population has two important functions: on the one hand, it is manufacturer of material goods and services, the creator of the national public product, etc.ment - their consumers. Most active part of it is labor Resources - working age population (Men aged 16 - 59 years, women - 16 - 54 years inclusive), except Disabled and people of retirement age and teenagers who work. In Ukraine workforce of nearly 30 million people, in their structure is dominated by hard-working people - 58% (For 2005 р.).

Employment. Employment rate population in Ukraine permanently reduced (in terms of economic crisis in 2000 he was 62%). Has changed as the structure of Employtoast: if in 1990 entire population was employed in public econtors, in 2005 by - over 3 million people - in other areas especially in market infrastructure. Unequal rate of layoffs in different sectors of the economy affected the structure employment. Share rightcontinued Ms areas material production decreased from 60% in 1990 till 50,7% in 2004 was the last decade increase in workers was only in management.

The relationship between supply and demand for labor forms labor market. Now it demand is much smaller than onposition which increases the number of unemployed people. Unemployed in Ukraine believe able-bodied people who do not have earnings recorded in the civil service employment as job seekers, willing and able to start it. They is 8,6% of able-bodied population. Most of them - a woman. 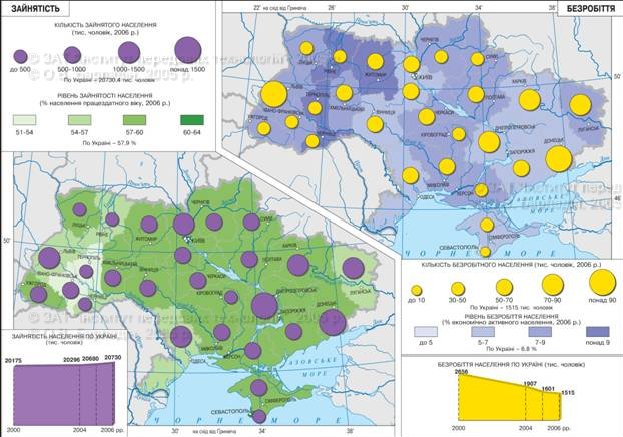 Table. Employment in areas of Ukraine

Imbalance between supply and demand for labor cause its significant outflow from Ukraine. Under adverse demohrafichnoyi situation is phenomenon in the future could lead to shortages labor force in many regions. Therefore necessary a series of Zakhovirgins to improve employment of labor resources in Ukraine.

Economically active population - is working well people aged 15 - 70 years (Including retirementnery and the unemployed who want to work) that engaged in economic activities that makes a profit.

Unemployed believe able-bodied people who do not have earnings recorded in the civil service employment as job seekers, willing and able to start it.

1. What is human resources and economically active population?

2. What changes in the employment of labor in recent years?

3. What is the labor market? What caused the growth rate in Ukraine?

4. What measures do you believe can improve working population in our state and reduce the outflow to work abroad?