2.     What agro-climatic conditions needed for growing crops in your community?

Rye most are grown in Polesie and Carpathians, where reverseganization excessive, soil not very fertile, and for wheat - it is not very favorable conditions. Rye gives lower yields than other crops, but it is a valuable food crops.

Barley, corn and oats are used as fodder crops, but they have great food and value. Barley will raiseyut globally, but particularly in southern areas. Top area of this place-led corn is in the northern and central parts of the steppe, on South Forest, where it gives the highest yields. Oat grown mainly in the northern and western parts of Ukraine. Areas of spring barley and oats grow in the years when they spring peresivayut winter crops, destroyed during the harsh winters (strong frost, no snow cover).

Because of the drought resistance millet grows mainly in the plain, and rice (Dank) - Only on irrigated steppe lands. Buckwheat grown in marshy Polissia regions because of its intelligibility to moisture. In areas under its quite significant.

The level of grain production in Ukraine has taken the last one the leading places in world - our annual fee as high as 50 million tons and painst. In the 90's XX Art. they declined twice, and only in 2004 and 2008 was donated a record harvest since independence (about 42 million t grain). Ukraine wants to enter the leading grain exporters. 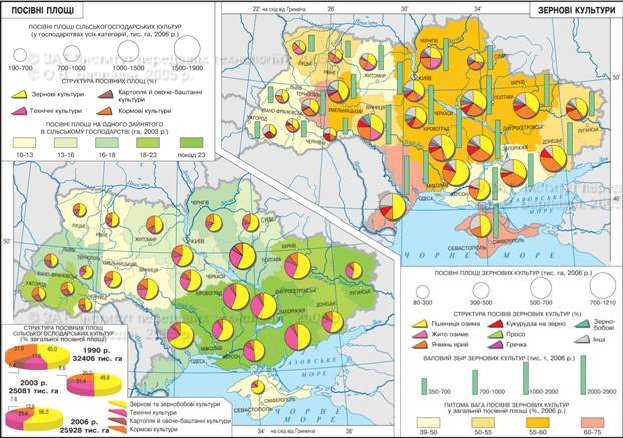 The largest area among commercial crops in Ukraine are sonyashCLOCK and sugar beets. By producing these cultures Ukraine has long time occupied a leading position in Europe and included among the world leadersditch. However, reduced demand for Ukrainian sugar caused a sharp reduce the acreage of sugar beet and fees. Instead, the area under sunflower sharply increased - up to 70% of the acreage of all technical Cultures, Ukraine, together with Argentina tops the list of manufacturers valuable culture in the world (annual fee of 3 - 3,5million t).

Sugar beets demanding to heat, light and moisture need rodyuchyh soil, so their basic regions are growing steppe and north of the steppe zone.

The best conditions for growing Sunflower - In the plains and the south steppe zone. Besides him, the important oil cropsWe are rape (Polissya steppe), soybean, rytsyna, flax kucheryavets (plain).

Home fibrous culture in Ukraine - flax dovhunets. Main his crops are in Polesie and Carpathians, where the predominant cool and wet summer. This culture is largely replaced hemp - traditional fibrous culture in Ukraine: the last area declined sharply in the second half XXArt. There are small areas of cannabis in Transnistria and in Mykolayiv and Odessa areas where they will raiseyut mainly for seed (oil produced from it). In recent years In the southern regions of Ukraine resumed growing cotton onSiwa is occupied a significant proportion of early last century.

Essential oil of Culture practice in the south of the steppe zone, the largestst - in the Crimea.

With industrial crops also grown in Ukraine hop (In Polissia largest Zhytomyr Oblast), is used, principally Accordingly, brewing industry, and tobacco (South steppe and steppe) that is the raw material for the production of cigarettes.

Potato AND Vegetable. The importance of plant has Potatoes and vegetables. Potatoes are grown throughout Ukraine, but its highest yielding - in Polesie and steppes. Vegetable developed everywhere, mostmore crops - in farms steppe and steppe zones. In northern and central parts of the country dominated by vegetable crops such as cabbage, carrots, table beets, cucumbers, in the south - tomatoes, peppers, eggplant, onions. Large areas in Ukraine are melon Culture: pumpkins, watermelons, melons, zucchini, squash, which are valuable products nutrition. The main area they are in the plains. 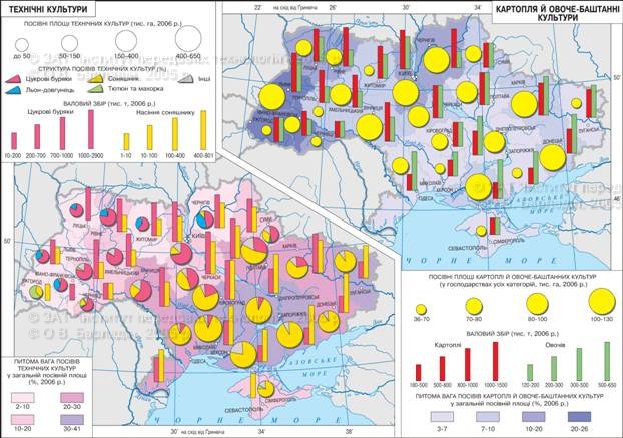 Fodder crops cultivation. More than a third of cultivated areas of the country are forage crops. Among them the highest portion single and perennial grasses, corn, Virudards also feed roots.

Horticulture and Viticulture. Thanks to the mild climate and the availability of fertile Ukraine has significant soil area Gardens. The seed of trees (apples, pears) best fruit in forest and the Polesie, and stone fruit (cherry, sweet cherry, plum, apricot, cherry-plum, etc..) - in the desert. Throughout Ukraine common patch of berries, which grow currants, currents, raspberries, gooseberries et al. The southern and central parts steppe in the foothills of Crimea and developed in Transcarpathia viticulture.

1. Which sectors crop developed in our country?

4. In regions of Ukraine developed horticulture and viticulture?

2. Using thematic maps and map AIC, find out which specialization has Agricultural your area (autonomous republic). Explain Due to such factors emerged such specialization.