1.     In the course of physical geography Ukraine recall that called natural (physiographic) zoning.

2.     What is called the national economic complex?

CONCEPT Economic and geographical areas. Тerytoriya Ukraine heterogeneous by naturednymy conditions and resources, strength and composition of the population, historical and geographic conditions development, the level and structure of economy. This division is a prerequisite for its on economyMiko and geographical areas. Such areas are large in area, population economic potential and the socio-economic systems that formed within several adjacent administrative regions.

Economic and geographic areas marked original specialization in the allian wide division of labor (external function) and comprehensive developmentcom economy. Specialization areas are shaped by different factors: natural (natural conditions and resources), social (population needs and economy, the number and quality of workforce, economic and financial potential scientific and technical basis), geographical location and features historical development of the territory. Specialization means that district-meant that it is a link national complex of Ukraine due to popular participation in the production of goods and services to other regions.

Complex development of the economy provides the maximum satisfactiontion needs and Management District from local resources. Unlike units administrative-territorial inthe cause of economic and geographical areas are not of management. The regulatorylation economic and social processes in their territory vidbuvayetXia-based implementation of programs socio-economic development.

SCHEME Economic and geographical districts UKRAINE. Under the conditions of entry Ukraine in the Soviet Union it territory was divided into 3 large economicNo areas are united Management knowstively the number of regions and focused on federal (All-Union ") division of labor. Clearly, this economic zoning is not acceptable for modern Ukrainian state. In practice has not achieved any of the schemes of new zoning, although scientists developed their few.

The most common schemes, offer or 6 to select the areas ofbers or 9 districts. One of the main signs of economic (socio-economic) area is the presence of a large city center (nucleus) to which tends territory of the district. These centers in Ukraine is a city-million (Kyiv, Kharkiv, Odessa, Donetsk, Dnipropetrovsk) And Lviv. Under this entails the following socio-economic areas:

The figure shows the scheme of socio-economic zoning, according to which emit 9 districts (with F. collateral): 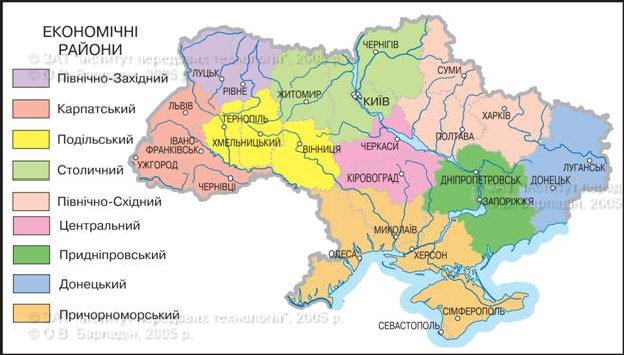 The table below presents basic indicators of economic regions (area, population, gross domestic product). It allows each district to see the place in Ukraine according to indicators.

The following paragraphs will discuss about each of these areas, we give here only their most general characteristics. Thus, Donetsk region is most powerful industrial regions of Ukraine with primary development of heavy industry Prydneprovsk, Northeast and Capital - highly industrial and at the same time with the powerful agro-industrial areas scientific and technical potential. Central, Podolsky and North-West areas are mostly agro industrial specialization, and for the Carpathian and Black Sea regions are characterized by industrial and agricultural tourist and recreational areas of development. Black Sea region, in addition, has the most developed port-sea mining in Ukraine.

Socio-economic areas do not have controls, but their may be made within forecasts of future development, scientific applicationstechnical progress, the so-called target development program. The actual regional branch of socio-economic development in Ukraine is the largest unit within the administrative and territorial division, which in Ukraine is known, is 27: 24 oblaststhose Autonomous Republic of Crimea, Kyiv and Sevastopol.

EconomyMiko and geographical areas - is large in area, population and economic potential socio-economic systems that formed within several adjacent administrative areas and have a specialize in the allian wide division of labor.

There are several schemes of economic and geographic division of Ukraine, The most common are two, providing for division of the country or 6, and 9 economic-geographical (or socio-economic) areas.

1. What is a prerequisite for selection economic and geographic areas in the country?

2. What is economic geography (social and economic) area? What are its main features.

3. Compare the scheme of socio-economic zoning of Ukraine of different scientists. How are they similar and different between them?

4 *. Name the three most and the least economic and geographic areas Ukraine each of the following indicators: a) its area, b) number population, c) GDP. Calculate the average values of these parameters for  imaginary economic region, and specify which these areas have rates close to calculated.