Assumption Kiev-Pechersk Lavra - an ancient monastery, which is the largest Orthodox shrine in Eastern Europe. However, it is an outstanding architectural ensemble, in which are stored in several museums of priceless cultural treasures. Nowadays there exist historical and architectural reserve and monastery. Lavrov made the World Heritage List by UNESCO.

history of the monastery began in the middle of XI. when in caves on the slopes of the Dnieper River, settled several hermits and there was a community of monks, led by Anthony and Theodosius. Soon the monastery building was on the Earth's surface, and the cave became a place of burial and secluded prayer. It quickly became the largest monastery and most respected in Russia. In the early XII century. monastery had three masonry temples. However, modern face Laura formed in the XVII-XVIII centuries. When the architecture of the Baroque style dominated.

Laura divided into top and bottom, and the latter, in turn, consists of the Near Caves, Far caves and lavish court.

Upper Lavra Caves hugging performance plateau. To get on its territory, surrounded the fortress walls, three gates can be - a holiday, the Economic and South. The first two of them decorated Gate Church - Trinity and All Saints. The main buildings of the Upper Lavra is the Assumption Cathedral and the Great Bell Tower. Around them are refectory, Metropolitan Chamber, cells and farm buildings. Most of them are now museums and exhibitions, the most famous is the Museum of Historical Treasures.

South Gate connects with Lower Upper Lavra. Last Known primarily two underground labyrinths - near and far caves (or cave St. St. Anthony and caves. Feodosia). Here are buried just in (mostly monks Cave), whose relics (remains) The Orthodox Church believes that worship the miracle and many pilgrims. Around the entrance to each of the caves in XVII-XVIII centuries. formed in beautiful ensemble consisting of churches, bell towers and secrets. 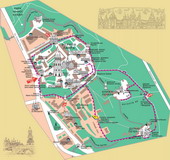 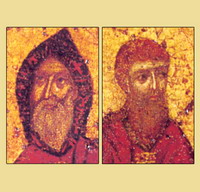 Founders of Winter. Fragments of the icons end XI - beginning of XII century. 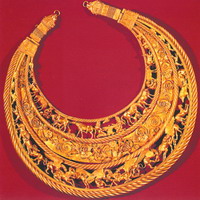 One of the underground corridors Near Caves

In the Near Caves 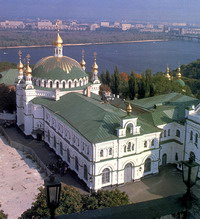 St. Anthony and Theodosius of the refectory 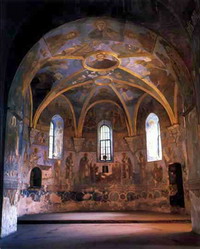 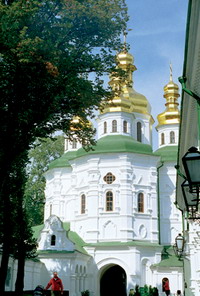 All Saints Church on the Economic Gate

Sky View of the Great Bell of Kiev Pechersk Lavra 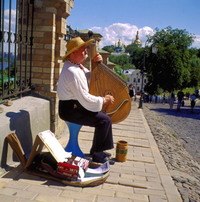 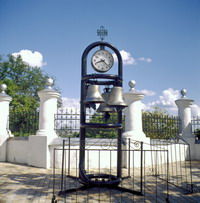