oldest mode of transport in the city is the tram. Back in 1891 in Kiev was established motion of trams on horse-drawn street Khreshchatyk and Great Vasylkivska. Soon the rolling stock cars added to steam traction. However, operating experience has shown poor performance of first tramway in mountainous terrain of the city. This forced the city Duma review approaches to traffic and trams gave impetus to the development of electric traction. In 1892 the city began the first movement of the Russian Empire of the electric tramway, which immediately won the sympathy of Kiev.

almost a century funicular operates in Kyiv. Put into operation in 1905, this type of transport business card and today remains the city, connecting the Upper Division of the city.

In 1925 the opening of accounts for regular bus service in town. The first route ran from the square. III International (European area) to the street. L. P'yatakov (str Saksaganskogo). First bus fleet consisted of German and Italian. Since late 1920 XX century. City fleet replenished domestic machines (ZYS and later LAZ). Dynamic development of the city spurred the rapid development of bus transport. Today, thanks to its mobility buses of different vmistymosti serving passengers in all boroughs.

Trolley began to ply the city in 1935. The first route ran on the street. Chervonoarmiiska the street. AP Lyubchenko to Pl. Leo Tolstoy and had a length of 3.5 kilometers. Passengers served only 4 cars. However, already for several years in Kiev were three routes and almost 50 trolley buses, carrying 15 million passengers annually. During the war trolley farm was completely destroyed, and a year after the liberation of Kyiv in autumn 1944, took the first trolley route restored. After the war, this type of transport to develop rapidly and all of urban development. In Kiev, the first time in world practice made trolley operation, connected in a train. 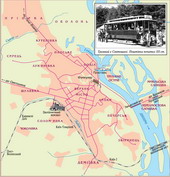 Funicular, the beginning of XX century. 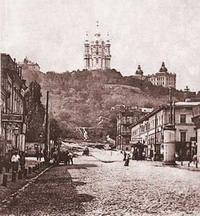 View from the hem of St. Andrew's Church, the beginning of XX century.

The streets of Kyiv, the beginning of XX century.

Chain bridge over the river, the beginning of XX century.

View of the Upper Division of the city, beginning of XX century.

Harbor, the beginning of XX century.