3. What is the origin Kyiv (textbook)

What is the origin Kyiv

-          When and where originated Kyiv? What benefits of this little place?

-          It tells about the origins of Kyiv ancient record and that the story is confirmed by modern research?

We live in one of the oldest European cities, one of the most beautiful cities in the world. You may have wondered over where your family originated, you know something about the long history peoples living in our country. Did you ever interested in what was previously where are your house, your street, school? After all, our city has More than fifteen hundred years. Just imagine how much has changed over the generations Kiev these ages, how much your peers for centuries studied the history of Kyiv! 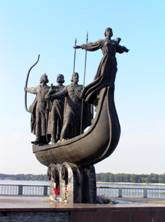 Consider the Source 1. Do you recognize? It is known all over Europe Monument to the founders of our city.

This memorial day come people - foreign and Ukrainian tourists walking near him Kiev. Special become a tradition for visiting this place Suite, which found their families. Each year the Kiev school graduates also come here and meet the star.

Remember when you were last at this monument.

Did you show it to your friends from other cities and countries?

What can you tell about this monument?

The monument, created by sculptor Basil and Boroday installed on the embankment of the Dnieper in 1982 looks like an ancient lаaction, which has a large water River Kyi, Schek, Horeb and their sister Lybid that spread arms like a bird to infinite space. 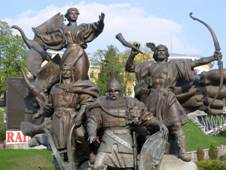 Did you know that Kiev is second monument city founders?

Find out where it is when it was installed.

- What did first residents of our city?

- By which details of the monument you made these conclusions?

Hard to imagine that once vast many years ago in a place familiar to us of houses, streets and squares in small settlements were living people who are older than us by 20-25 thousand years.

The remains of one of the oldest settlements in Kyiv - Kirillov parking - found on the street Frunze depth of about . Opened her scientist - archaeologist Vikenty Chvojka. One of the streets of our city named after him.

Frunze Street still had the name Cyril, whence the name parking. Archaeological finds from this and other ancient stands stored the National Museum of History of Ukraine and the Archaeological Museum.

Archaeologist - Scientist who studies the history of human society based on real attractions: guns work, household ornaments, remains of dwellings, graves and so on.

Imagine in those days, about 20 thousand years ago, the future streets of Kyiv hunted bears, deer and rhinos and even mammoths. The bones of these animals and tools hunt for them was found in the parking lot. 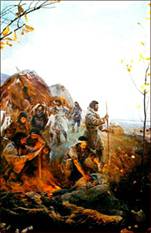 Source 3. Reconstruction of the interior of the parking

The remains of later settlements of people on the territory of Kyiv were found in the following areas of the city known as Obolon and Division, Pechersk and Kurenivka, Nikolskaya Slobidka and red on the farm left bank, in the city center - on Starokyivska Hill and more.

JudgeThat attracted prehistoric people in these places over the centuries?

Found during the excavation of the vessels items that were used by various rituals (Source 4), belonged to different periods of life in Kyiv. But they all testify that the place where our city, always attracted people and they lived here continuously throughout the ages.

Task: Look at the modern map of the location of settlements in Kyiv old people.

Incomparably beautiful and rich nature - forests are rich in game and endless fields suitable for farming, fast, small rivers, ponds and beautiful and powerful - the Dnieper, which not only provided the fish, but served connections - all attractedhere people. In addition, the high right bank of the Dnieper, the numerous ravines and mountains were natural protection against possible attackers.

Rivers in ancient times in general played a unique role. They were the primary means of communication, ie communication with other tribes, nations, cities. In our climate it is important that such they were summer and winter - covered with solid ice of the river turned into a rather convenient way. It was almost no way. Much of Eastern Europe was covered  impenetrable forests. 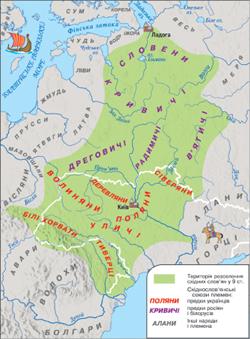 We - the Slavs. This numerical famous people of the first centuries AD. He originated the modern scientists think tremendous territory of the Vistula in Poland to the Oder in Germany and the Dnieper River in Ukraine. Hence Slavic tribes - the major union, the predecessors of modern nations - settled throughout Eastern Europe. One such tribal unions, which called themselves glades, with VI-VII centuries. settled in the middle reaches of the Dnieper. 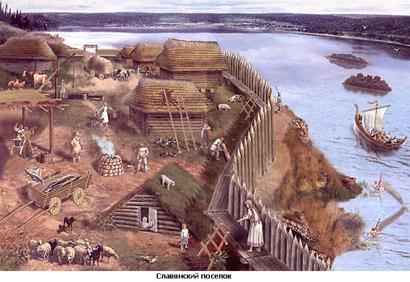 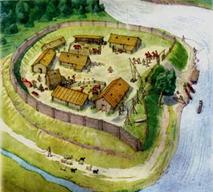 -where people made housing

-What do residents settlement

-differs Slavic of more ancient settlements, which you reviewed earlier.

-what you see on the river? about it may indicate 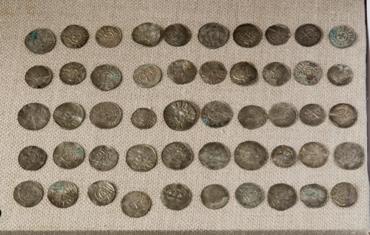 - As may indicate similar findings in Slavic settlements?

- Express assumption, as Arab coins could get to the ancient Slavs

? They export otter, black fox and swords from distant ends of Slavonia to Rumskoho (Black) Sea? They go to sea Dzhurdzhana (Caspian) and go to any bank? Sometimes they bring their goods on camels in Baghdad.

-          or confirmed your assumptions about the origin of the coins?

History laid the foundation of Kyiv chronicler Nestor in "The Tale of Bygone Years".

- Try to read some words from the piece.

- What are the names and titles you know? 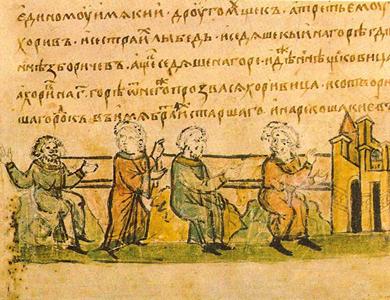 Source 9. Detail of the "Tale of Bygone Years" which describes the foundation of Kyiv

"? It? three brothers: one name cue, and second - cheeks, and the third - Horeb, and their sister - Lybid. I lived Kyi on the hill where now descent Mill and cheeks sat on the mountain, which is currently called Shchekavytsya and choir - the third mountain, which units and prozvalasya Horevytseyu it. They made Townand in honor of their eldest brother called it Kyiv.

Others, not knowing said if Kyi was the carrier, but then the circle Kyiv was transported from this side of the Dnieper. So they said: "At transported to Kyiv. If Kyi was carrier, then he would not go to Tsesarohrada. And is this sort of cue reigned in his and walked to tsesarya. We do not know, however, to whom, but that know what great honor, as telling behold, he received from what tsesarya?

Nestor the Chronicler, "The Story of past Years

- Why Nestor stresses origin Kyi and honors given to him Byzantine Emperor?

- Which gives a different version of it and why it does not agree?

So, the city was founded in V - early VI Art. on Starokyivska Hill (Then called her simply Mountain), near the place where the river flows into the Dnieper Pochayna.

What are the names associated with the names of the founders of Kyiv, you have known.

Nestor lived in the X-XI Art. if Kyiv has long been a great city center of Russia. But the town was founded much earlier. Chronicler enjoyed legends. But, perhaps, beyond. Archaeological studies showed that information was accurate Nestor! Excavations at Starokyivska Hill found "hail Kyi. It was a small fortification, with three Surrounded by natural hazards, but the fourth was built earthen deep shaft and pоin. Inside the fortifications discovered the remains of buildings, where the prince lived with wife.

What has been a legend for Nestor, As it turned out, had very real reasons!

- The nature created here nearly ideal place for a fortress - high mountain with three sides surrounded by impenetrable ravines. It was left to only build the shaft from the fourth.

- Those who possessed this hill, controlled the Dnieper, which became the primary trade route for Slavic and many neighboring tribes.

- Convenient location of the new gave the city the opportunity to take charge of all those who followed the Dnieper to the rich then states - Byzantium. This, in turn, gave the opportunity to keep more soldiers and thus enhance their power over the local tribes.

- And the inaccessibility of the fortress was important - in fact, lived in the plains of the militant nomadic tribes.

Nestor the Chronicler cites the legend of St. Andrew, which is called the First Called because he was the first disciple of Christ. According to this legend Andrew preached in the Crimea and from there decided to move north. He went Dnipro to a very picturesque place where the high hills above the river stood. Of these opened a spectacular view of beauty and to the left and the right bank. Here St. Andrew installed the cross and said: "There will be a great city, famous for its beauty and holiness. " In XVIII. on this, as believed, the city was built one of the most beautiful churches of Kyiv, St. sanctified her name. Andrew. Inside the church are pictures devoted to this legend.

Historian B. Rybakov the emergence of cities.

"Cities that are born - is not fabulous palaces which stand overnight. The city was born as an original "Unit strength" of his district. The causes and forms of such a center may be different and diverse.

This may be borderline or strengthening central, domicile leader, point where were going People's Assembly in Slavs, storage place of tribute, tribal ritual center crossroads of important routes the periodic bargaining position and so on. The more specific signs accumulated at one point, the safer it converting? in town "

-          where the preconditions of Bridge stresses historian?

-          Which of them can be considered essential for the emergence of Kyiv?

Rich Kyi and its children, rich and increased in Kyiv. And after a while he and a small city - the center of the tribe Polyany - Became the center of a great power. Later historians have given her the name Kiev Rus.

- Find a place where this monument, look around. Read the inscription on the stone and tell parents why it is installed.