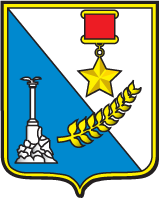 Sevastopol - A city that has a special status

City lies in the southwestern part of Crimean peninsula on the Black Sea, in the foothills of the Crimean mountains. Surface rolling is platopodibni area. On the coast - marginal ledges, cliffs, beaches and coves. Deep naturally protected bay with easy navigable water and transportation approaches. Most of them - Sevastopol bay - not a narrow bay in the dry for 7,5 km. Urvysti its shores, form capes, alternating with some smaller bays (South, Marine, Alexander, etc.). The climate of the city close to the subtropical, with warm and wet winters and hot and dry summers. The average temperature in January is 2,7 °, July - 22,4 °. Rainfall per year - 350 mm. City Water Supply Reservoir provides Chornorichenske, construction near Inkerman Black River, which flows for 16 km in a narrow (50-80 m) canyon and falls in the Sevastopol bay. Width of floodplain areas in advanced reaches 350 m in the middle stream and 600-700; M at the bottom. The area of green space 43 thousand ha. Including a lot of parks. In Sevastopol, and located on the outskirts of the state reserve: Aya and Black River, and preserves, local akvatorialni complexes and natural landmarks Rocks Laspi.

city was founded in 1783 as a Russian naval base on the shore of the largest and most convenient for ships to Crimea bay. Before 1784 Akhtiar was called (from the Tatar village located here). During the first half of XIX century. become a stronghold of the Russian Empire in the Black Sea. In 1854-1855, and in 1941-1942 he oboronyalosya heroically against enemy armies (the first time - from Anglo-French troops - 349 days, the second time - from Germany - 250 days), but in both cases, the city still being surrendered enemy. Almost completely destroyed in Sevastopol was restored after World War II, postwar buildings in harmony with its center hilly terrain and sea view. In Soviet times the city as the base of the Black Sea Fleet was semi to visit. Nowadays Sevastopol together with the adjacent area has a special administrative status. In the city - many monuments, museums and historic places associated with the heroic past, among them: panoramasma "Defense of Sevastopol 1854-1855" (A. Enberh architect, artist F. Roubaud, 1904); diorama "Assault Sapun Mountains May 7, 1944 ( V. Petropavlovskiy architect, artist P. Maltsev), Vladimir's Cathedral (1854-1888 biennium, the architects C. Hue, A. Avdeev) - Tomb flotovodtsev M. Lazarus, B. , Kornilov, V. Istomin, P. Nakhimov; tower defense Malakhov barrow; Kazarskogo monuments to Alexander (1834, O. Bryullov), V. Kornilov (1895 and . Schroeder, M. Vronskiy) shipwrecks (1905, A. Adamson), Eduardo Totlebenu and demining (1909, I. Schroeder, A. Bilderlinh) Nakhimov (1898, restored 1959, Sk. Tomsk, architect. O. Aref'ev) Bratsk cemetery of the temple-pyramid St. Nicholas (1857-1870 biennium, A. Avdeev) graves of English and French soldiers. The most famous historic landmark - Count Prystan (1844), the wind tower (1844), the Church of Archangel Michael (1848) and Sts. Peter and Paul (1848). Museums: Art, Black Sea Fleet Museum and Aquarium, Institute of Biology of Southern Seas.

Chersonesos (in the Middle Ages - Kherson, in the Ruthenian tradition Korsun). Settlement, muzeyefikovani remnants of ancient and medieval city in the territory of Sevastopol. The city was founded approx. 421 was BC. BC by Greek colonists. Originally Chersonese was an independent city-republic was later depending on the Pont kingdom Bosporan and finally became a possession of the Roman Empire, and after its disintegration has passed to Byzantium; some time belonged to the Khazars. In 989, the Town won Kyiv prince Vladimir, who, according to the chronicle, received baptism here. After a devastating attack Khan Foot (1299) Chersonese declined, but life here continued until the XV century. Systematic archaeological studies Chersonese began in 1876 Excavated remnants of walls and towers, and ancient Christian churches, theaters, residential areas, craft areas, cemeteries. In the outskirts of the city is extremely valuable to study science Heraklean Claire - land citizens KhersonESA ancient times. At the settlement (now part of Sevastopol) posted Archaeological Museum and St. Vladimir's Cathedral, built in 1861-1892 biennium (Architect H. Grimm) over the ruins of the ancient temple, which was considered the place of baptism St. Vladimir.

Balaklava. The city lies on the shores of the bay's unique, narrow entrance is guarded by a rock. It is believed that this bay is described in the "Odyssey" (episode of lestryhonamy). Since 1357 - Possession of Genoese, who built a fortress here Cembalo (its ruins are preserved), and from 1475 - Turks. During the Crimean War, Balaklava Bay Navy base was anti-Russian coalition. Nearby - Russian and English monuments Balaklava battle in 1854, George cave monastery (near Cape Fiolent).

Inkerman. In V-VI cent. the rocks at the mouth of Black River was the Byzantines built a fortress (later destroyed). In its place princes Theodoro principality in the early XV century. Kalamitu founded fortress, which was to protect the port - the only way the principality to the sea. 1433 fortification captured Genoese, and 1475 - Turks, who renamed it to Inkerman and modernized. In the cave monastery carved in the rocks (some scholars argue that once existed here monastic city like Athos).

ISI Fiolent. According to legend, it served as a priestess of Artemis here Ifigeniy - the main character in the famous Greek myth. 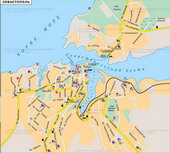 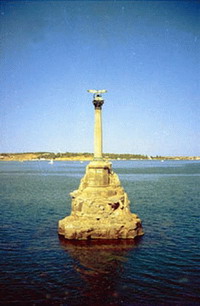 A monument to the lost ships 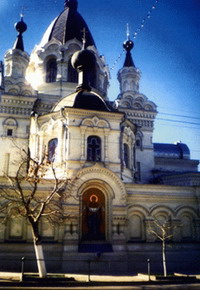 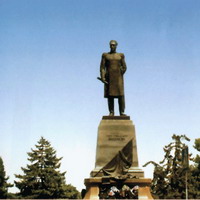