Theme 23. NEW TRENDS AND FACTORS OF CULTURAL AND EDUCATIONAL ACTIVITIES IN 1917-1921 RR. (textbook)

Theme 23. NEW TRENDS AND FACTORS OF CULTURAL AND EDUCATIONAL ACTIVITIES IN 1917-1921 RR.

The national liberation movement largely influenced cultural Ukrainian society. Despite the political buremnist events of interest to the cultural life not only did not die away, but rather more more increased.

Predetermined period, the culture of the Ukrainian revolution and revival of Ukrainian statehood are socio-economic and political factors. Complex and ambiguous processes connected with overthrow Tsars, the Bolshevik revolution, deploying Ukrainian liberation movement had a significant impact on culture. Violent events life reflected on the outlook of artists in unexpected viddzerkalyuvalys  forms and art. We must notice that these changes committed under the influence of the increasing socio-economic crisis covered all levels and segments of the population. However, there have been revival of all forms of national cultural life in Ukraine. For the first time its history there were conditions when the development of Ukrainian culture were look after their state-level.

Each of the revolutionary government, seeking to assert its authority, tried to rely on the cultural heritage of the people considered it appropriate not only win over the intelligentsia as a major media and the creator cultural and spiritual values, and convert it to exponent relevant political ideas and interests. Most vividly manifested  in the activities of the Bolshevik regime.

However, the bitter class and national liberation struggle polityzuvala consciousness, a split society into hostile camps, distorted world view of people. In a society dominated by intolerance bitterness and contempt for human life. Intellectual activity lost prestige, the intelligentsia - the sources of subsistence. The loss of educated people in 1917 - 1921 period were high. Thousands of intellectuals, artists Culture emigrated abroad. Intelligentsia replenished by other social groups. Under these conditions, cultural process Ukraine acquired idiosyncratic, peculiar to this era form.

The impact on the cultural life of Ukrainian society kept social factors, reflected changes in social structure society. Changes in political power during this period occurred with kaleidoscopic speed. Each of them relied on social and close to her national groups and segments of the population, trying to support them economically and politically, and involves them in accordance political and cultural development. A new social structure society that is artificially narodzhuvav Bolshevism, almost completely changed socio-cultural order and social structure of most creators culture.

Equally important were the factors of national culture. Liberation movement on one side stopped the process of imperial dictatorship and  subordination in the sphere of cultural life, on the other - called spiritual  rise of the Ukrainian people. The period of struggle for recovery and preservation of Ukrainian statehood was marked by eruption of Ukrainian culture, which became an integral part of Ukrainian state.

2. Cultural achievements of the Ukrainian government in education, cultural and educational activities of NGOs

Since the formation of the Central Council of Ukraine has taken a course on revival of the national school. The new government proclaimed a unified mandatory, tax free, comprehensive, secular democratic school. They proceed decentralization of education departments of education created minorities and Board of Education. They determine the teaching staff recommended content-oriented schooling, contributed to the newspaper Ukrainian textbooks, educational literature in the language of national minorities and others.

Opened new Ukrainian higher educational institutions. In October 1917 in Kiev began working Ukrainian National University, through month were based educational courses, which are then transformed into Pedagogical Academy. Under the Hetman Skoropadsky October 6, 1918 he inaugurated the first state university in Kiev, Ukrainian, 22 October - in Kamenetz-Podolsk.

However, the Ukrainian state was not just another political regime, but  educational policy. Focusing on broad government has given brutal centralization. Overturned by the national departments of education minorities and the Board of Education. Appointment of teachers, which previously had competence of local bodies, now transferred to the Ministry of Education.

However, the Hetman government continued the policy of development of Ukrainian education. This is especially apparent in the opening of new training institutions of government funds. In addition, strongly encouraged private Ukrainian initiative in establishing schools and other schools. By Hetmanat period began about 150 schools. In the middle schools that remained Russian, introduced Ukrainian subjects: the Ukrainian language, history and geography of Ukraine, Ukrainian literature.

P. Skoropadskyi based on the ruling strata of the population had more financial resources than the Central Council. In 1918, Hetman government provided substantial assistance to universities and institutions of Ukraine to repay their debt accumulated in previous years. Only by keeping in Kiev and Kamenetz-Podolsk two new Ukrainian government universities Ukrainian State asyhnuvav 403 thousand rubles. In addition, nearly 1.5 million rubles. allocated to the training of 28 thousand rubles. government has allocated to scholarships and financial aid to students. Ukrainian High School for days Hetmanat replenished not only universities. At that time started Architectural Institute Higher Technical Institute, Kyiv Clinical Institute and others.

The language of teaching in universities was only newly Ukrainian. Lecturing in Russian only allowed in certain cases and is under agreement with the Minister of Education.

In high school, focused on higher education institutions. At that time, continued expansion of higher education. In particular, to increase teaching staff for 1918 Teachers' Institute were started in September.

An important event in the educational life was the adoption in January 1919  law on state Ukrainian language in the UPR. This is due to approved Ministry of Education of the new spelling.

However, to determine the overall effectiveness of educational policy Directory, like other governments, is difficult because it unfolding against a background of continuous warfare which eventually melt Ukraine.

Promoters of national ideas in public education were organization. Thus, during the Central Council was established professional organization of teachers - All teachers union. It  organized network of courses for teachers to work in new  conditions, initiated the development of Ukrainian science dictionary terminology from different fields of knowledge. 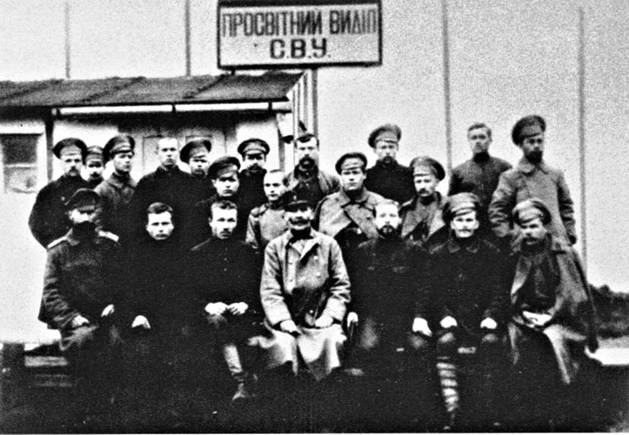 Cultural and educational organization "Enlightenment" create library different clubs and courses, gave Ukrainian books and magazines. In April and September 1917 in Kiev on prosvita congresses. Autumn 1917 in Ukraine were out 900 such organizations. Until June 1921 number of "gap" has grown to 4227.

Given the financial hardship the public began to assume cause the maintenance of schools. In autumn 1917 the population of funds was established in 1953  secondary schools with instruction in Ukrainian, including 3 Ukrainian Gymnasium in Kiev. 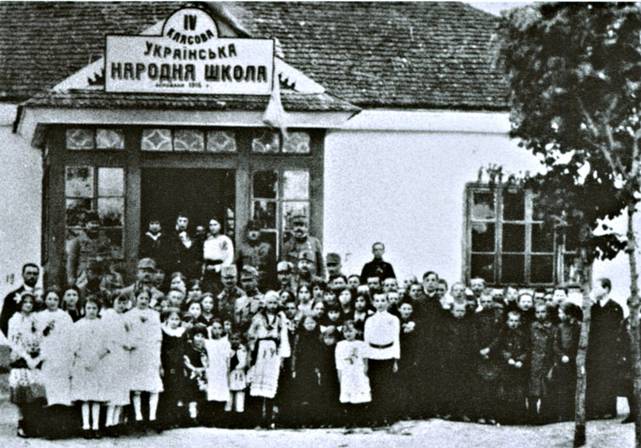 Great attention was paid to the Ukrainian edition textbooks. Only Society school in Kiev in 1918, released to the world of 2 million educational publications. School education orhanizovuvalasya local "Enlightenment", cooperatives, peasants 'and teachers' unions. At Many schools created for children Ukrainian folk gardens. 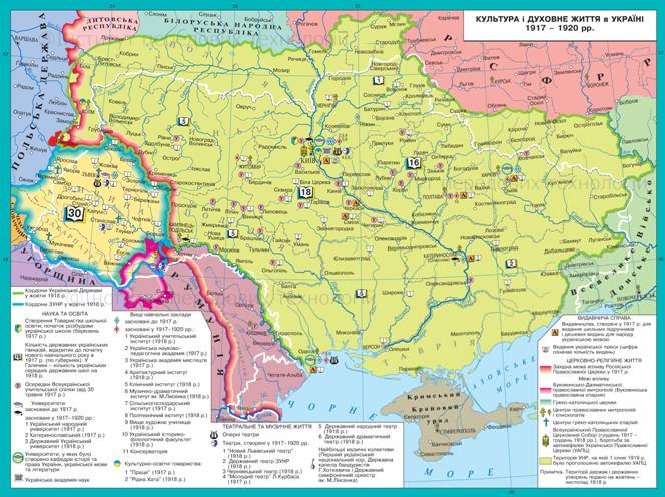 3. The state of science.

Despite the turmoil of revolutionary time, Ukrainian scientists have made considerable efforts to continue research work in various branches of knowledge. At this time worked a whole galaxy of outstanding scientists among them: D. Bagaley historian, geophysicist Vernadsky, philologist A. Crimea, a biochemist A. Palladin, urban planners Paton, chemist L. Pysarzhevsky, teacher Muzychenko O. et al.

In March 1917 Hrushevsky at a meeting of the Ukrainian Scientific Society put on the establishment of the Academy of Sciences of Ukraine. Subsequently The Preparatory Commission was formed, which held a large organizational work.

November 24, 1918 during the opening ceremony Hetmanat  Ukrainian Academy of Sciences. It had three departments: History and Philology, Physics and Mathematics and socio-economic. To structure of branches included three institutes, 26 departments, 15 research commissions and committees. The first president was the Wye V. Vernadsky. 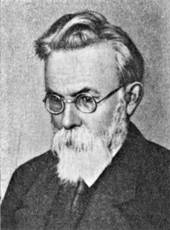 In late 1920 the Academy has worked more than 200 scientific staff staff, besides a large number of researchers worked with major research center on a voluntary basis.

One of the leading figures of the Ukrainian Academy of Sciences was Yefremov.

Sergey Efremov (1876-1939) - social, political, government, academics, journalist, literature. Political career started with a student years. One of the founders of the Ukrainian Democratic Party UDP (1904). Belonged  to the liberal wing of the Ukrainian movement, stood on national-cultural positions advocated gradualism and moderation of political struggle, since 1908 member of the leadership TUPu. One of  direct participants and initiators of UTSR, its deputy Chairman and Secretary General of International Affairs at the General Secretariat. Negatively treated the October Revolution, saw in it danger to the Ukrainian movement, advocated the creation of a single National Front. Hetman condemned the coup, refused to cooperation with the Hetman government. In the days went UPR Directory from active politics. 1919 worked in the Ukrainian Academy of Sciences. 1922-1928 biennium - Vice President YUAN. In 20-ies published a number of fundamental scientific research on the history and literature  literature. Do not hide his negative attitude to ideology of the Communist Party of the Soviet system. 1929. arrested in  April 1930 sentenced in the SVU as a senior. Died in jail. Rehabilitated 1989

After a short "Ukrainian Cultural Renaissance" period Hetman again for men of science, education and culture came hard times. During the Academy of Sciences Directorate experienced hard times because commitment of its leaders to the violent Ukrainianization blatant aversion to the legacies of the past proposals generated lukewarm "Revolutionaries" eliminate "bourgeois" hetman institutions, in particular Academy of Sciences.