Immediately after World War Ukrainian lands turned into a battleground or pryfrontovu zone between the Russian army and troops of the Austro-German bloc. In this area, acting Russian Southwest Front, which in 1916 added more and Romanian. In August - September 1914 Russian troops beating attack the Austro-Hungarian armies, directed his attack on Galicia. This operation was called Galician battle. As a result of this grand battle the Russian army captured eastern Galicia, northern Bukovina and came to the Carpathian passes. Russian troops entered the city, Chernivtsi. During the battle of the Austro-Hungarian troops lost 400 thousand people, of which 100 thousand captured. Only with the help urgently from Germany and the transfer of troops from other fronts Austria-Hungary avoided final defeat.

Another success was the Russian army siege of the fortress of Przemysl, which surrendered March 22, 1915 As a result, were captured about 120 thousand Austrians and captured 400 guns. In the conquered territory of the Russian authorities have imposed regime, which, according to the chairman of the Russian administration Galicia Governor-General of the graph A. Bobrynsky had introduced "Russkie Beginning in the life of the country's population. Thus, in Ukrainian Galicia closed schools and other educational institutions, cultural organizations, introduced the Russian language and Russian legislation. It began inversion of Greek Catholics to Orthodoxy. Almost all representatives of Ukrainian elite, who remained in the province, as well as top Greek Catholic Church led by Metropolitan A. Sheptytsky taken deep into Russia. There were Jewish pogroms.

Russian occupation lasted until the spring - summer 1915 is already in February joined the Austrian part of Chernivtsi, June 22 - to the city, and the end of June took all Galicia and Bukovina, with the exception of a narrow strip east of the Ternopil. In Galicia, Austro-German troops during the offensive in 1915 occupied Volhynia, Holm, Brest with the cities of Lutsk and Dubno. The attack of Austro-German army halted on the line Kamjanetsky - Ternopil - Kremenets - Dubno.

retreat of the Russian army was accompanied by new Ukrainians pogroms, deportations of the population. Along with this, by retreating Russian units were added the refugees who feared reprisals on the part of Austria-Hungary. In total, Russia has moved more than 100 thousand Ukrainian. Member of Russian State Duma MP Miliukov characterized Russian policy in Galicia "European scandal».

spring of 1916 troops Southwestern Front under the command of O. Brusylov caused a stroke that went down in history as Brusilovsky breakthrough. Russian troops launched the offensive May 22, 1916 and after a brief preliminary bombardment moved inland along the front at 80 - 120 km, re-mastered Chernivtsi, Coloma, Brody, Lutsk. Because Brusilovsky break the Austro-Hungarian troops suffered significant losses: more than 1 million killed or wounded, over 400 thousand prisoners. The Russian forces lost about 500 thousand people.

After this attack the front line remained almost unchanged throughout the year. Meanwhile, in March 1917, Russia had a revolution. The new Russian government, seeking to strengthen the internal situation of the country in summer 1917 launched a new offensive, which ended in failure and a complete new victims. Counterfire Austro-German troops forced Russian troops to leave Galicia, to step back even further than in 1915 This front line lasted until the signing of the Brest Peace (January 1918). 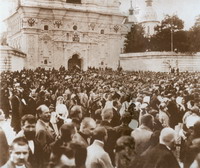 Kyiv on the day of the First World War 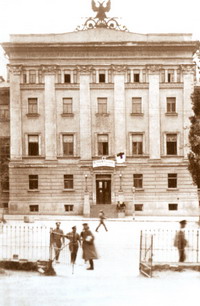 In Kiev during the war 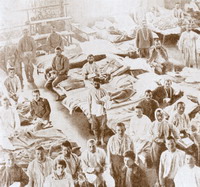 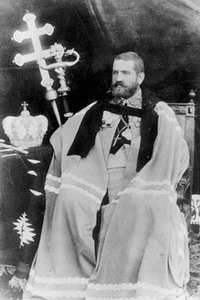 Sechevyye shooters on the move. 1914

Sechevyye archers in battle under Galic. 1914 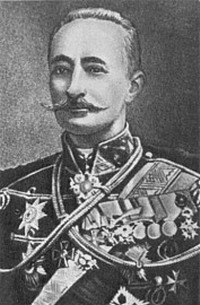 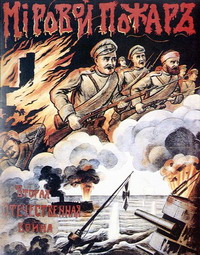 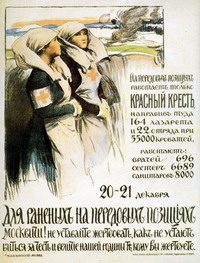 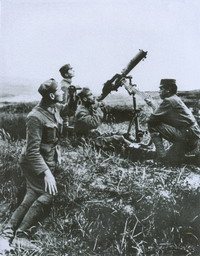