new government had to act according to the German instructions. Any manifestations of independence in the exercise of power reaching the obstacle. The only area where the hetman was given freedom of action - an area of cultural and educational life in which most progress has been achieved. For a short period of rule P. Skropadskoho opened two universities, a large number of Ukrainian schools, founded the Ukrainian Academy of Sciences organized by the National Library, Archive, Art Gallery, Historical Museum, theater and more. These successes could not save the hetman of the growing dissatisfaction with its dependence on the occupants. Ukrainian leaders could not forgive Skoropadsky that he forcibly removed them from power, farmers - returning landlords, workers - limiting gains revolution. But we were Germans, the authorities had Hetman military resistance. When Germany lost the First World War, it became clear that long P. Skoropadskyi authority shall not. Ukrainian party were preparing an uprising against GETmana, which would become the center of the city of White Church. Chosen to head the insurrection nerve center - the Directory, which consisted of five people, including allocated and S. V. Vynnychenko Petlura. The impetus for decisive action was the rebels refused to charter the hetman of Ukraine's independence and return to the future nebilshovytskoyi Russia. The rebels that their total number reached over 100 thousand people, defeated the troops of the hetman. A decisive battle took place near the station Motovilovka, near Kyiv. December 14, 1918 troops of the Directory came to Kyiv, P. Skoropadskyi government resigned and went abroad (died in 1945 in Berlin).

seizing power, Singapore has announced the renewal of the Ukrainian National Republic (UNR) and the laws that were adopted in the previous period of its existence.

In October-November 1918 there were important changes in Western Ukraine that were part of Austria-Hungary. Austria-Hungary was defeated, and nations that united it, embarked on an independent life.

November 1, 1918 Ukrainian military units occupied Lvov, eastern Galicia, and later in the area was declared a West Ukrainian National Republic (ZUNR), elected its president E. Petrushevych. Ukrainian aspirations for their own state faced opposition. The Poles, who also revived its statehood, claimed their rights to Galicia. Broke Ukraine-Polish War. Ukrainian population of Galicia, which was a nationally conscious and cohesive than in the Dnieper, was to protect the homeland. Ukrainian Galician Army (UHA) played the persistent resistance of the superior forces of the Poles.

UKRAINIAN STATE. FORMATION Directory and restore the UPR (May - November 1918) 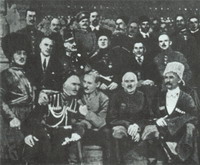 At the reception of Hetman Skoropadsky

Mariinsky Palace - the residence of the hetman Skoropadsky 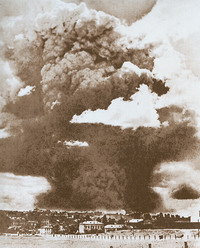 The explosion of ammunition. Kyiv, trven 1918 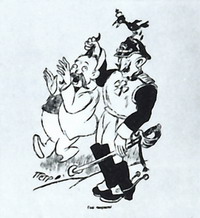 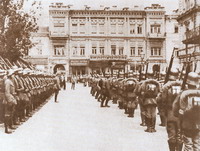 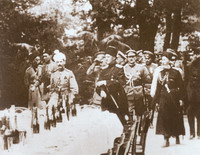 Hetman Pavlo Skoropadskyi with its environment 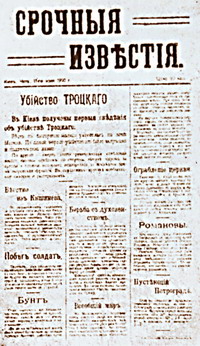 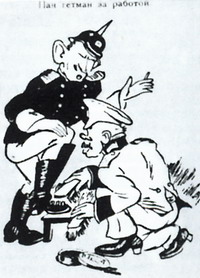 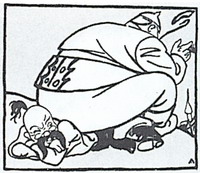 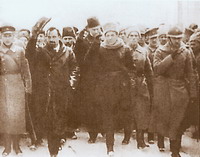 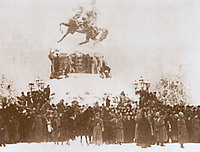 At the parade in Kiev, the Ukrainian army. December 1918 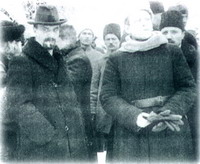 Banknotes of the Ukrainian State 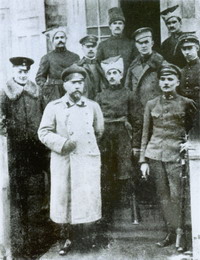 Ukrainian delegation at the peace talks with Russia. 1918