West-land - East Galicia (center - Lions), Bukovina (Chernivtsi), Transcarpathia (Mukachevo) - until the end of World War II the former Austro-Hungarian Empire. The deepening crisis of the Habsburg Empire was accompanied by growth of Ukrainian national movement. Ukrainian politicians have begun preparing to create their own state. This statement was made October 18, 1918 This day is the day of the proclamation at Western State, which later was called the West Ukrainian National Republic (ZUNR).

intentions of Ukrainian politicians Poles contrary intentions on the creation of "big" the Polish state, to which planned to include Western land. To avoid capture by the Poles power, Ukrainian hoped to get peacefully from the hands of the Austrians, a group of young Ukrainian officers led by D. Vitovskyi took the initiative in their own hands. In the night from October 31 to November 1, 1918, the Ukrainian military units took control of Kiev and other cities next day Galicia. The promise of democratic rights, reform, 8-hour working day, provided the new government wide support. But the Poles, who also began to regain their country, led the fight against ZUNR. Broke Ukraine-Polish War (1918-1919).

other events developed in Bukovina and Transcarpathia. November 6, 1919 in Bukovina national uprising began, the government moved to the Provincial Board led by Popovich. But by November 11 the Romanian troops occupied the land. Transcarpathia, which was the scene of confrontation Ukrainian, Czech and Hungarian organizations, was also employed by foreign troops.

November 5, 1918 the newspaper "thing" appeared programmatic declaration of the National Council, in accordance with which ZUNR proclaimed democratic republic, the social foundation of which were workers. November 9 was appointed interim government - the General Secretariat headed by K. Levitsky. The proclamation of the republic announced only 13 November 1918, after the abdication of the emperor.

22-26 November 1918 was elected deputies of the Ukrainian People's Council, endowed with legislative and representative functions. Most deputies stood on the national liberal positions, giving preference to the construction of state before radical socio-economic transformations. ZUNR became President E. Petrushevych. The Council wanted to ensure the rights of national minorities, who were given 30% seats.

extremely important act was the consolidation of statehood and UPR ZUNR January 22, 1919 (the Act of Unification). ZUNR name was changed to the Western region of the Ukrainian National Republic (WUPR) for its full autonomy.

Ukrainian-Polish War, the actual international isolation ZUNR negatively influenced her fate. Proved ineffectual activity ZUNR and UPR at the Paris Peace Conference. June 25, 1919 recognized the right of representatives of the Entente occupation of Poland in Eastern Galicia, though he stressed the temporary nature of occupation. Especially hostile attitude toward ZUNR France, seeing in strong contrast to Poland in the east of Germany. 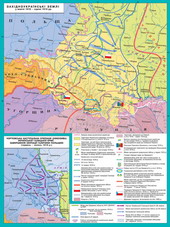 Proclamation Act of the Union 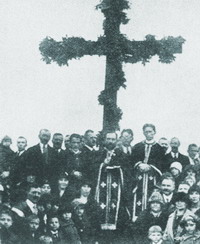 Blessing of the Cross in honor of the proclamation ZUNR