FIRST WAR OF SOVIET RUSSIA WITH THE UKRAINIAN PEOPLE'S REPUBLIC OF KOREA (December 1917 - May 1918.) (compendium)

failure of the Bolsheviks in late October by armed seize power in Ukraine has forced them to change tactics. The Bolsheviks took the course to eliminate the UCR by its re-election in the National Congress of Councils. 4 (17) December 1917 merged the executive committee of the Kyiv Soviet workers 'and soldiers' deputies has convened All-Ukrainian Congress of Soviets. In Congress invited representatives of provincial, city councils and county workers, soldiers and peasants deputies. Representation rates were designed so that most delegates were from councils who were influenced by the Bolsheviks. At this time, as opposed to the Bolsheviks, UCR preparing elections to the Constituent Assembly by universal suffrage with secret ballot and the principle of proportional representation.

using political methods of struggle for power, the Bolsheviks did not forget about the military. In Kiev, established the Military Revolutionary Committee (IMC), which was preparing a new uprising. Sovnarcom Russia Ukraine unlawfully declared in a state of siege and ordered the local revolutionary garrisons (55 spare revolutionary regiments) to act decisively against the enemies of the revolution, that is against UCR.

In response to the actions of Russia's General Secretariat Sovnarkoma ordered separate Ukrainian units that were outside of Ukraine to return home, and November 30 (12 December) in 1917 and sent to disarm the Bolsheviks of Kyiv. Failure over the attempt by the Bolsheviks seize Kyiv 2 nd Army Corps, which was under their control. In the winery building forces intercepted the 1 st Ukrainian Corps Gen. Skoropadsky, disarmed and expelled from Ukraine.

UCR First All-Ukrainian Congress of Soviets ignored in Kiev, but this week it changed its position rozislavshy to place a letter of request to send to Congress as many delegates from the peasants and ukrainian troops.

At a congress in Kyiv gathered more than two thousand delegates, including the Bolsheviks were only about 100. Delegates to the Congress clearly expressed support UCR.

Bolsheviks decided to continue working in Kharkov. They teamed up with the delegates of the regional congress of Soviets of Donbass and Rih and proclaimed the beginning of the first All-Ukrainian Congress of Soviets. It represented the whole of 1982. Delegates from the peasantry, which was almost 2 / 3 of Ukraine's population was almost no.

First All-Ukrainian Congress of Soviets in Kharkov worked 11 - 12 (24 - 25) in December 1917, a majority of votes he called for the establishment of Soviet power and Ukraine declared republic of Soviets of Workers, Soldiers and Peasants Deputies ( Soviet UPR). Congress completed its work on the election of the Central Executive Committee (CEC) as part of 41 persons (including 35 - Bolsheviks). CEC elected Chairman of Ukrainian Social Democrats E. Medvedev. The CEC approved the first Soviet government of Ukraine - People's Secretariat. It consists S. Baki, E. Bosch, V. Zatonsky, J. Kotsyubynsky, F. Sergeev (Artem), M. Skrypnyk and others.

National Secretariat immediately rescind the ban on export of grain to Russia and issued a ruling on the invalidity of all resolutions of the General Secretariat. People also asked the Secretariat Sovnarkoma Russia for military help in the fight against UCR.

Along with the "war of decrees" armed struggle unfolding. More December 17, 1917 UCR Sovnarcom sent an ultimatum, signed by Lenin and Trotsky L..

emphasized that in case of non-compliance ultimatum Sovnarcom deems Central Council in a state of open war against the Soviets in Russia and Ukraine.

Available in two power centers Ukraine - Kiev and Kharkiv National Soviet - Russia has formally RNA to remain aloof of events in Ukraine, presenting them as an internal conflict between the Workers 'and Soldiers' Councils of Deputies and the UCR. She was preparing to open armed struggle.

Soviet troops concentrated in Kharkiv, near Gomel and Bryansk under. Top leadership is carried out by V. Antonov-Ovsienko, and military - the former tsarist colonel M. Vorobyev. Bolshevik forces, which amounted to 160 thousand soldiers, consisted of the regular Army, Red Army units from Russia and Ukraine, detachments of sailors. Their tactic was to promote rail lines and establishing control of large industrial and transport center. Council expected to help the working groups in these cities.

Military Forces units were UCR Free Cossacks - Voluntary formation, which were created during the war. By number of troops is not inferior to the Soviet People's Republic, but were scattered throughout Ukraine, while the Bolshevik forces acting on key strategic areas.

Soviet command first assume control over the Kharkiv and Katerynoslav province. By mid-December 1917 was captured and important railway stations - Lozova Pavlograd Sinelnikovo. December 26, 1917 in Yekaterinoslav fallen power UCR. By the end of December were ousted from Donbass the White troops of General Kaledina. In the second decade of January 1918 the Soviets established in Mykolaiv, Odesa, Kherson.

agreed blows from the north and east of the Bolsheviks launched the offensive on Kyiv. With superiority in number and armament, acting decisively and brutally, pens Muravyova rapidly moving toward the capital of Ukraine. UCR situation became critical. Under demoralizovanosti dezorhanizovanosti and regular parts of the UPR was a symbol of national honor feat kilkohsot Kiev students and school students, led by Captain Omelchenko that 16 (29), 1918 near the station abruptly entered the unequal battle with the superior forces of the enemy and died in Ukraine.

January 16, 1918 in the capital began armed by individual parts of the city garrison and workers of the plant "Arsenal", directed against UCR. January 22 troops under the command of the UPR Petliura and E. Konovalca crushed the uprising in Kiev. However, it is not little strategic value. On the same day it was released Fourth Universal that proclaimed the independence of Ukraine.

But the Bolshevik army offensive continued. January 25 members of the Little People's Council and the Council of Ministers left Kyiv, Zhytomyr, moved to first, and then - a gazelle. Now save the UCR from the final defeat of the Bolsheviks could only help countries Quadruple Alliance.

reasons UCR defeated troops should be considered: reduction of the social support UCR (slowness and hesitancy in the implementation of socio-economic changes pushed the peasantry, while the majority of workers supported the Bolsheviks), the lack of proper attention to the military policy of armed security state that was in the absence of the regular army and centralized, a high degree of organization and efficiency of the Bolshevik army, the successful tactics of the struggle for power; skillful social demagogy councils.

first coming of the Bolsheviks to power in Ukraine, accompanied by a massive "red terror". Only in Kiev, Soviet troops under the command Muravyova destroyed up to 5 thousand people. This, of course, attracted the people of Ukraine to the new government. There were other unpopular measures of the Bolsheviks.

Central Council, realizing that her own efforts fail to overcome the Bolshevik aggression, decided to go for help to Germany and Austria-Hungary, which at that time led peace negotiations. They agreed to provide assistance in exchange for Ukrainian food and raw materials. Brest agreement was signed (February 1918), reinforcing that agreement. In addition, it has been a secret agreement under which Ukrainian living in Austria-Hungary, will be merged into a single "crown land".

After agreement half a million army Germany and Austria-Hungary moved to Ukraine. The Bolsheviks did oppose such a force could not and quickly retreated to Russia for destroying them all that they could not pick.

Ukrainian and allies quickly showed its true face. Expelled the Bolsheviks, they were treated as occupiers: arbitrarily bereaved population in food, spoiled restoring order that existed in the king. All this did not contribute to strengthening the authority of the Central Council, which in the eyes of the people looked like his treacherous interest. Meanwhile, the Germans wanted to replace the UCR for a more compliant government. April 29, 1918 with the assistance of German troops in Kiev was carried out a coup. Central Council removed from power, and the governor proclaimed hetman of Ukraine Skoropadsky Paul, a descendant of the former Ivan Skoropadsky. 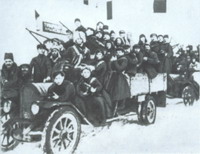 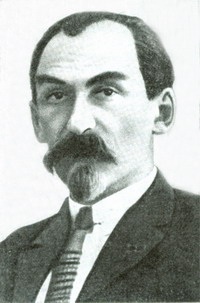 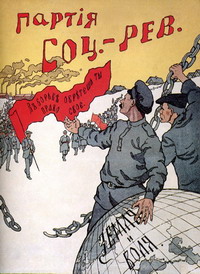 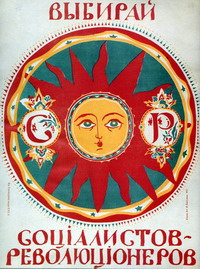 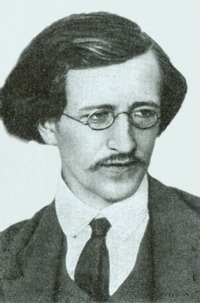 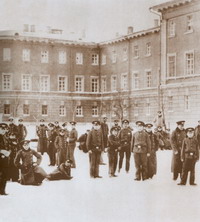 Parade of Ukrainian troops in Kiev. 1918

The team of riflemen during the January battles in Kiev. 1918

Places Zaporozhian battles with the Bolsheviks in Kiev in January 1918 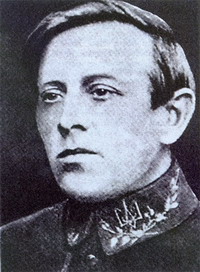 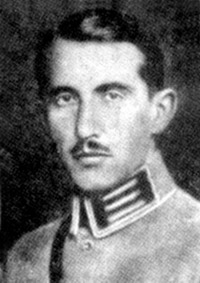 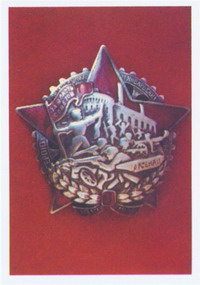 Breastplate of the Bolsheviks - events of October 1917 - January 1918 Kyiv 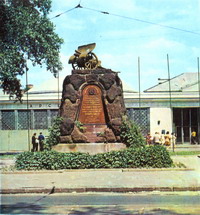 A monument in memory of the events of 1918 in Kiev

Reburial of the victims in Kiev in March 1918 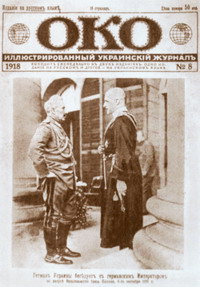 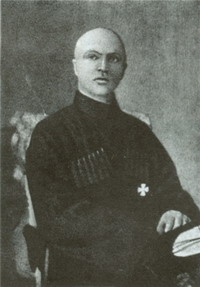 The German command in Kiev

Public executions in Katerynoslavi.1918 was