Directory dictatorship led to power crisis. Among its members there was a divergence of opinion about the policy directions of the nearest. Activities of this body as personal rivalries paralizuvalasya Vynnychenko i Petliura. February 11 (according to other data February 10) 1919 W. Vynnychenko resigned and became, Petliura sole bearer of supreme power in the state.

Unlike pomirkovano-conservative regime of Hetman DirectoriA UPR was a radical socialist government direction, which determines its domestic and foreign policies.

DirectoriA failed to restore order i set up the efficient management of the country. Peasant element, aroused antyhetmanskym uprising was rapidly regenerate into destructive anarchy. Singapore gradually lost control over the territory, where local authorities took Ataman. Ukrainian army was split in Guerillas who fought only near their homes, and composed when adverse conditions - dissipated without a fight, pryhoplyuyuchy with a weapon. So, if you drop the Hetman regime in mid-December 1918 Singapore had one hundred thousandth the army, the end of January 1919, before surrendering Kyiv - approximately 21000th. Ataman resorted to arbitrariness, organized Jewish pogroms. The central government was unable to stop the anarchy. The situation is more complicated due to disembark in November 1918 in southern Ukraine Entente troops, mostly French. His direct challenge - to take control of territory, which left the German army unit - Entente troops are not fully fulfilled. However, they supported Ukraine in the Russian great-Whites is investigated counterrevolution and cause further deepening divisions within the Directorate.

Directory fate was decided primarily on the Soviet-Ukrainian Front (Soviet Russia's second war against the People's Republic - the end of 1918 and beginning 1919). From January 1919 the army left Kharkov Directory, which became the capital of Soviet Ukraine. Within three weeks, was destroyed leftbank group armies UPR. Military action switched to the Right Bank. February 5 Bolsheviks came to Kyiv. With enthusiasm March 19, 1919 Zhmerinka Ukrainian Front was divided into two fronts: South-West and North-Western.

After the army reform by getting rid napivpartyzanschyny, S. Petliura could somewhat stabilize the situation in during WW II and early June 1919 to consolidate in line Starokostyantyniv - Proskuriv - Kamenets. Over the rest of Ukraine (except the western provinces) vstanovyvsya Soviet control.

formation of state institutions began to create the Temporary Worker-Peasant Government of Ukraine, which was later renamed the Council of People's Commissars (CPC) of Ukraine. Led the Bolshevik his authoritative, professional revolutionary, Bulgarian nationality Rakovski sent from Moscow. Most members of the government composed of Russians and Jews, among senior Ukrainian officials were very few.

Soviet power in Ukraine is built according to designs, firmly established in Soviet Russia. January 6, 1919 title, which was disguised Soviets in 1918 - the Ukrainian National Republic, was abolished. From now until the Constitution of 1937 is officially called, was a Ukrainian Socialist Soviet Republic (USSR after 1937 - USSR). The highest state authority recognized Ukrainian Congress of Soviets, in the period between congresses - Ukrainian Central Executive Committee (Central Executive Committee). At the local power belonged to local councils. March 10, 1919 Third Congress of Soviets adopted the USSR Constitution and thereby legitimize Soviet power in Ukraine.

This Constitution reinforcing the dictatorship of the proletariat, private property and revoked the exploiting classes deprived of voting rights. Proletarian nature of the state disproportionately reinforcing system of elections of deputies.

in the process of Soviet attempts to disconnect the unit carried out Ukraine Donetsk-Krivoy Rog region and the Crimea. If the first remaining within the republic, it was established in Crimea Crimean Soviet Socialist Republic.

essence of the Bolshevik policy was accelerated destruction of Ukraine's existing economic system based on commodity-money relations, and its replacement by direct barter, of which relied on government officials. This policy was called "war communism" and was evidence of possible immediate replacement of capitalism with socialism.

introduction in Ukraine of "War Communism" was accompanied by a limitation of its sovereignty:

Policy Bolsheviks in Ukraine in 1919 made a dismal impression on the population of the Republic has caused discontent among the peasants, intellectuals and workers. Against the Bolshevik regime started to climb the mighty peasant insurgency. Most dangerous for the Bolshevik uprising was led by George M. Grigor '. 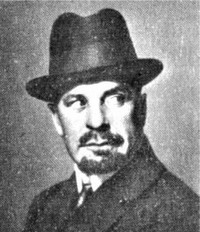 A detachment of the UPR Government 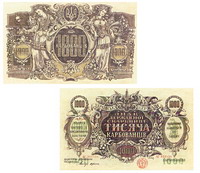 Banknotes of the Ukrainian State

Directory of the Declaration of Sophia Square. 1918

Reds are in Ekaterinoslav. January 1919 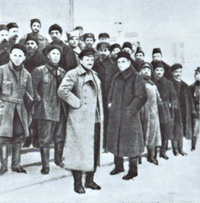 Ukrainian delegates at the VIII Congress of the RCP (b). March 1919 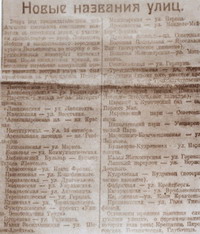 Burial killed in battle with the Whites. Basin, January 1919

Members of the Provisional Workers 'and Peasants' Government of Ukraine. 1919 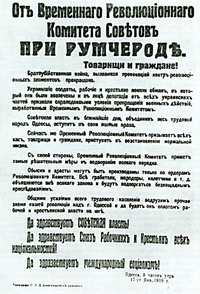 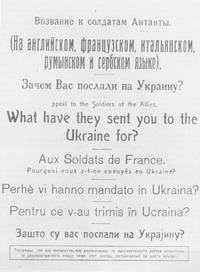 Appeal to the soldiers of the Entente 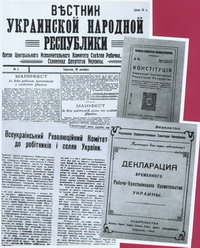 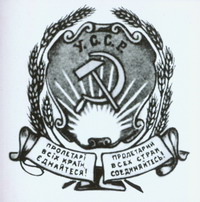 Emblem of the Soviet Ukraine. 1919

Red-Chinese in the streets of Odessa. 1919 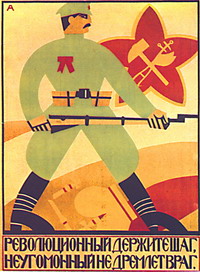 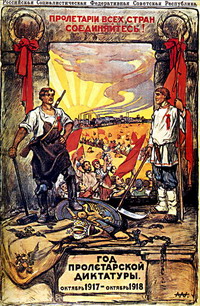