plan an attack on the USSR, is known as Barbarossa, Hitler was signed in December 1940 in its calculations out of the German command of lightning strike, which involved a rapid and complete victory over the enemy during a campaign.

Implementation Plan "Barbarossa" began at dawn June 22, 1941 Three group armies - "Midnight", "Center" and "South" - numbering around 5.5 million people, while they led the offensive , respectively, through the Baltic States to Leningrad to Moscow via Belarus, and Kyiv. Along yiz German army offensive in the Ukraine participated in the German army allies - Romania and Hungary.

Despite the militaristic nature of the Soviet state, before the war it was unprepared. Already in the first days of fighting the Red Army suffered heavy losses and started to retreat. Army Group "South" opposed the war in Ukraine Kiev and Odessa special district military command. To more effectively reorganized their defense of the South-Western Front (Commander Michael Kyrponosa) and the Southern Front (Commander John Tyulenyev). Desperate attempt to stop the enemy in the Brody-Lutsk-Rivne made tank connection Southwestern Front. A few days (23-27 June) fierce tank battles, but despite the loss, the enemy continued to attack.

In August, the enemy moved to the Dnieper and the Black Sea. Battles fought on the approaches to Kyiv. In dense siege ended Odessa. Around the capital of Ukraine was established three lines of defense, all the attacks on the city from the west were repulsed. Moreover, the aggressor has lost about 100 thousand people. For some time the enemy halted attempts to acquire Kyiv by frontal impact.

deep armor breakthrough in late July Nazis managed to surround the area in Uman Part 6 th and 12 th Army Southwestern Front. And further this strategic maneuver command of the Wehrmacht used throughout the period of attack.

using strategic initiative and mistakes of the Soviet command, Nazis carried out the plan of the main forces surrounding South-Western Front. On the territory of Belarus to Ukraine transferred the force, "Center" group - 2 nd Field Army and 2 nd tank group Colonel General Huderinana.

to mid-November was invaded Crimea. Held only Sevastopol - home base of the Soviet Black Sea Fleet. All attempts to take the city by storm ending for the Germans failures and large losses.

late autumn of German troops controlled the large expanse of the Soviet territory, however began to show early signs of exhaustion victorious offensive. So in November - December 1941 failed operation to seize Moscow. December 5 at Moscow Red Army moved in a counter attack the enemy threw a distance of 100 units of 250 km. Thus, the plan "Barbarossa" was frustrated. Building on the success, began to counterattack troops and the South West and South fronts. In January 1942 Force 6, 12, 21 and 58 th Army took the offensive in the area of raisins - Barvinkove - Lozovaya return to Kharkov, to reach the Dnieper and Donbas Kharkiv eliminate enemy group. But, having moved westward at 90 km, attacking forces stopped for lack of forces. However, managed to keep a foothold so-called "performance Barvenkovsky».

In April 1942 the active hostilities stopped. The situation on the fronts stabilized and both parties began preparing for the summer campaign. With renewed vigor the war broke out in May. Soviet leaders expected the Nazis succeeded in the new attack in the Moscow area. It is a mistake calculating the correlation of forces in the south of Stalin ordered the attack near Kharkiv. It turned violent military defeat of South-Western Front, that they commanded the Marshal Semyon Timoshenko. Blows from the south and north, the Germans were in the grip of 6th, 9th and 57th armies advancing from Barvinkivsky offensive. At 240 thousand taken prisoner Red (29 May). In Crimea, May 8 attack came in 11th German Army. Until 20 May Nazis seized Kerch again, causing significant losses to Soviet troops and forced them to retreat to mainland. Defeat the Red Army in the Crimea that sealed the fate of Sevastopol. July 4 after 8 months of resistance the defenders left the city.

After a decisive victory near Kharkiv and Crimea, 28 June Nazis moved into large-scale offensive on the southern section of the German-Soviet front. In July, it completed the occupation of Donbass. 22 of that month the Germans entered the city of Sverdlovsk Voroshylovhrad (Luhansk) region, last in Ukraine. At the same time was busy all the right bank of the Don. Next 17th of the field and 1-Nazi Panzer Army led offensive in the Caucasus, and the sixth field and 4-Panzer - fought out on the Volga near Stalingrad. Battles of Stalingrad in August - November 1942 have been crucial in the war. After loss of the city would cut off the Caucasus from the main territory of the Soviet Union and then - would be lost oil fields of Azerbaijan. Besides, would open the way to the Urals - the main material basis of Soviet defense.

Molotov's speech in connection with the attack of Nazi Germany on the Soviet Union. Moscow, 1941

German tanks, padded soldiers in the vicinity of Kyiv. 1941 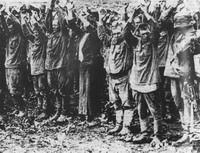 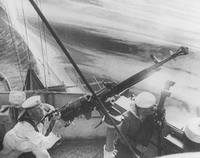 The sailors of the ship "Soobrazytelnыy" Black Sea Fleet during the defense of Odessa. 1941 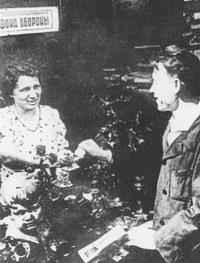 Sevastopol hand over valuables to the defense fund. 1941 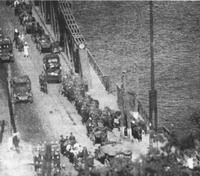 Evacuation of the population. Kyiv. Bridge them. E. Bosch. August 1941 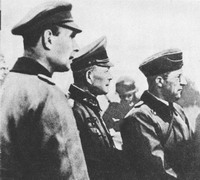 The Soviet people listen to the government statement. June 22, 1941 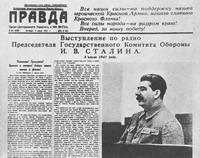 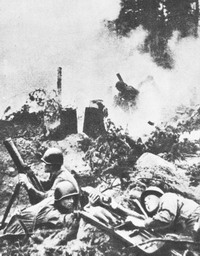 The Soviets are shooting springer by Nazis. 1941

A detachment of seamen Chernomortsev goes to the front. Odessa, 1941