Even before the war, Nazi commanders outlined the future structure of the conquered territories in the east. This should be special administrative formation - Reichscommissariat - directly subordinated Reichsfiihrer SS Hitler. Already in September 1941 began to operate two Reichscommissariat: Ostland, which included the Baltic states and Belarus and the Ukraine, which included the Volyn, Right Bank, Poltava and Lower Dnieper area. Reichskommissariat "Ukraine" was divided into six general districts (heneralbetsyrkiv): skirts and Volyn, Zhytomyr, Kyiv, Nikolaev, Dnepropetrovsk, Taurus. Administration Hitler occupied Ukraine was in Rivne. Eastern Galicia was incorporated in the General governorship (Poland). It was seen as an integral part of Greater Germany. In Galician, as a former Austrian subjects, the attitude was somewhat more lenient than than the population Reichscommissariat. But in the future land expected to colonize the Germans and Ukrainian and Polish relocated to the east. Transcarpathia is from 1939 was a part of Hungary. Romania as an ally of Germany, in 1941 regained Bessarabia and Northern Bukovina. July 19 was concluded the German-Romanian agreement on the handover to the Royal Government of Romania's territory between the Dniester and Southern Bug River with the city of Odessa. This area was called "Transnistria" (for taking). Pryfrontovi areas, which included eastern Ukraine and Crimea, directly administered by military authorities. In the future it planned to add to Reichscommissariat.

unprecedented victory overshadowed the minds of the German army to Hitler and his entourage. Plans for partial autonomy to the Slavic lands were rejected, the impression that the east can do everything you want, ignoring the rules of civilization and morality, which to some extent, the occupiers tried to adhere to the west. Policy eastern territories found in the design plan "Ost" was published in July 1941, assumed by all possible means to reduce the population of Ukraine and prepare it for German colonization. The majority of the Nazis planned to deport the east, a smaller part - onimechchyty the rest - to destroy. To that end the Nazis covered the Ukraine network of concentration camps where thousands died of war and civilians suspected of unreliability.

Even tougher was the policy of German Jewish and Gypsy population, which was doomed to physical destruction. In the ancient residence of Jews in towns and cities in western Ukraine and Podolia, Nazis created a separate, carefully vartovani ghetto. During the period of occupation of their inhabitants almost completely destroyed. Most massive executions took place in Janov of lions in Babi Yar in Kiev, where he died populous Jewish communities in these cities. To carry out bloody reprisals Ukraine scoured special "aynzatshrupy" who ruthlessly eliminated "ideological and racial enemies."

Ukrainians used as a gratuitous labor. Capable of the population were exported to Germany, where the lack of workers in industry, agriculture and service.

Farmers, like in Soviet times worked in collective farms, but now the fruits of their labor fed German army and the citizens of the Reich. Over expression of even minor demonstrators punisher burned entire villages with all residents. Townspeople were shot and starved of any occasion. The invaders did not see the need for major cities in the conquered territories, contrary to their vision of a postwar Eastern Europe as an agricultural suburb of the Reich.

result of occupation of Ukraine in the period 1941 - 1945 was the reduction of its population of 14 million people (of which 8 million were killed). Violence by an unseen enemy force bore a resistance movement that rozhortavsya increased in proportion to the Nazi terror. 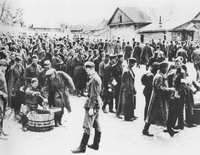 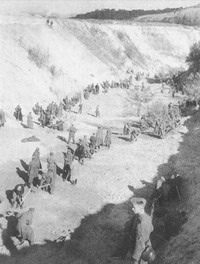