winter 1942/43 he was in the war was a breakthrough. November 19 troops attacked the South West and Don fronts, and the next day - the Stalingrad front. Overcoming the resistance of the enemy, 23 November attacking forces united fronts in the town of cake-on-Don. Consequently, surrounded at Stalingrad were 22 divisions and 160 separate parts 6 th field and 4-German Panzer armies which 330 thousand soldiers and officers. Trying to strike a wing of 650 tanks to break through from the outside environment after 12-day battle (12 - 24 December) failed. December 16 forces attacked the right wing of Voronezh and Southwestern Fronts. At their punches landed eighth Italian and Romanian 3rd Army, which kept the defense on the right side of Don. During the battles of the 1st Guards Army of the South-Western Front into the territory of Ukraine and 18 December liberated village Pivnivka Voroshylovhrad region.

before the New Year hope the German command to save the encircled groups vkinets failed. But the battles of Stalingrad lasted more than a month and ended February 2, 1943 complete destruction of the enemy. This disastrous defeat of Germany has identified all further progress of the war.

But in early March, the enemy was able to gather the forces and move in a decisive counteroffensive. During April - 25 March 1st and 4th Tank Army General Field Marshall Manshteyna moved to the Seversky Donets and again captured Kharkov and Belgorod. After that, the summer lull occurred at the front. Both sides were preparing for new battles.

mobilization of reserve price of German command could concentrate significant force in the front section of Eagle - Belgorod. In the summer of 1943 planned to strike from the north and south of Kursk to surround the Soviet troops in Kursk speech, and then deploy large-scale offensive that was to change the course of the war to Germany (Operation Citadel). July 5th German Panzer Army offensive in the districts and Ponyriv Prokhorovka, started grand Battle of Kursk. Despite everything, the enemy was able to overcome the well-prepared Soviet defenses. And on July 12 passed in counterattack troops and the steppe region of Bryansk fronts. During 50 days of continuous fighting the Germans lost 500 thousand officers and soldiers (30 divisions) and had to retreat, leaving the end of August Orel, Belgorod and Kharkov.

September 21 began the battle for Dnepr Nazis turned into a main element of a strong defensive line, named "East axis. Defense held down the Dnieper German Army Group Centre (in Belarus), "South" and "A" (in Ukraine). Army 1 st Ukrainian Front managed to grab a foothold on the right bank, near the Great Bukryn. But to develop the offensive in this area was too difficult. Then an attempt was made to force the Dnieper River to the north of Kyiv. Army 38 Army captured a foothold in the area Lyutezha. Hence November 3 began fighting for the liberation of Kyiv. November 6th Soviet troops took the capital of Ukraine and moved further west. In seeking to Kyiv at any price, the Germans moved in a counter attack was lost again captured Zhitomir and Korosten. During the two-week battle (13 - 25 November) German counteroffensive fainted.

1 and 2 of the Ukrainian front in the district of Kyiv - Zhytomyr and Kremenchuk - Dnepropetrovsk between them formed a deep Korsunsky performance that kept eighth field and 1 st Panzer Army German Army Group South. January 24th, 1944 activities began to fully surrounding these armies, January 28 and already both Ukrainian Front forces united around Zvenyhorodka. In the pot were 73 thousand German soldiers and officers. Attempts to break through the outer circle shot from Uman not led to nothing, and 17 February surrounded by enemy group was destroyed, killing over 50 thousand Nazis. In honor of these events the city was renamed Korsun Korsun-Shevchenko.

Korsun-Shevchenko Operation was conducted one year after the Battle of Stalingrad, in the same weather conditions, using both sides of the same strategic techniques. Another heavy defeat undermined the strength and the Nazis during March, they retreated from the Right Bank.

military operations in the south have demonstrated successful operation Snigurivs'ka Bereznehuvato-6 - 18 March. During those 12 days 3 troops of the Ukrainian front surrounded and destroyed part of the German 6 th and 3 rd Romanian Army Army Group "A" (8 divisions). Just after this was released Kherson (March 13), Nikolaev (March 28) and Odessa (April 10).

April 8 - May 12, 1944 by 4 th Ukrainian Front and the Army Special coastal supported by the Black Sea Fleet and Azov flotilla Germans were dislodged from the Crimea.

Back in March 2 troops of the Ukrainian front, pursuing 8th army of the enemy, came to the pre-war Soviet-Romanian border - the river Prut.

inevitable defeat of Germany became apparent. And the longer the front line moved west, the glaring question arose of the future structure of Poland and western regions. The leaders of the Polish resistance movement seen Galicia and Volhynia in stock Restored Poland and UPA leaders cherished the hope for the revival of the Ukrainian state. So the Ukrainian-Polish relations summer of 1943 extremely aggravated and turned into fierce fighting between the forces of the Ukrainian Insurgent Army and Polish Army. During the confrontation, which covered mainly Volyn, affected tens of thousands of Ukrainian and Polish civilians. But the fate of postwar Poland and Ukraine decided without the participation of both the oppressed peoples: victorious (USSR, USA and UK) outlined the borders of postwar Europe at conferences in Tehran (28 November - 1 December 1943) and Yalta (4 - 11 February 1945).

After a brief respite Soviet troops launched a summer offensive in 1944, the Soviet-German front in the Red army of 6.6 million people stood against the Wehrmacht forces number 4.3 million people. At that time command 1 st Ukrainian Front moved to Georgy Zhukov (Vatutin army general killed in the spring of 1944.) In July he led forces went into the decisive offensive against German Army Group "North Ukraine, brought the fighting in Poland, came to the Vistula River and only stopped progress on the approaches to Warsaw. During the Lvov-Sandomir offensive operation (13 July - 29 August 1944) the main force "Northern Ukraine" was destroyed. At the same time went on the offensive forces of the 2 nd and 3 rd Ukrainian Front. On the territory of Moldova was carried out by them Iasi-Kishinev operation on the environment and the defeat of the German-Romanian Army Group South Ukraine (20 - 29 August). As a result, Romania capitulated (August 24) and theyednalasya to block the anti-Hitler.

October 8 was released last settlement of the Ukrainian Soviet Socialist Republic in its prewar limits - Lavochne village in the Carpathians. Immediately after the Soviet troops crossed the mountain. October 27, with battles and gaining Uzhgorod and the war spilled over to the German satellites - Hungary and Slovakia.

In 1945, the host 1 st Ukrainian Front liberated Poland and participated in the assault on Berlin. Army 2 nd, 3 rd and 4 th Ukrainian Front had completed their winning move on the territory of Czechoslovakia, Hungary and Austria. 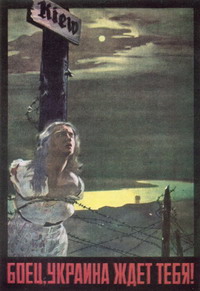 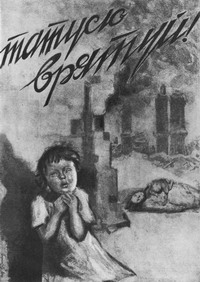 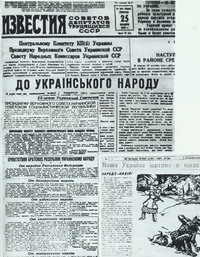 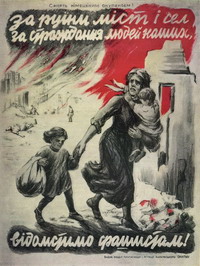 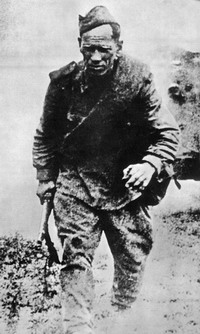 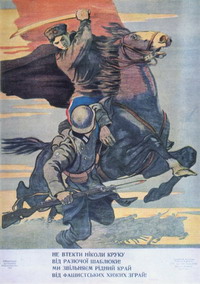 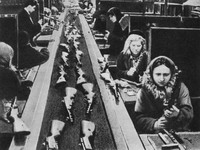 Production of tanks at one of the Ural 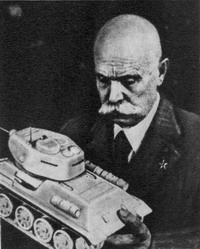 Springer on the Kursk Bulge 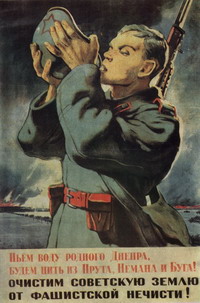 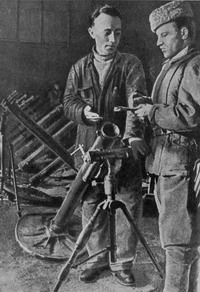 The transfer of military mortars 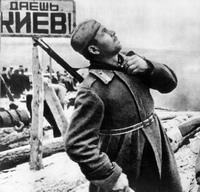 On the outskirts of the Kyiv

Forcing of the Dnieper 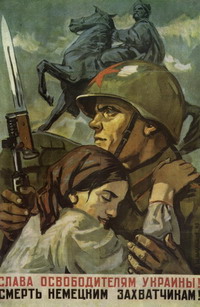 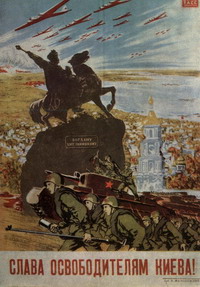 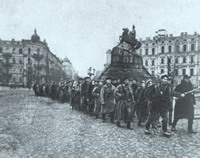 Fighting in the streets of Kyiv 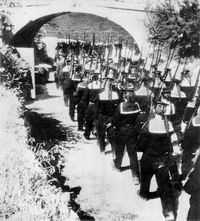 The Soviet sailors are in Sevastopol 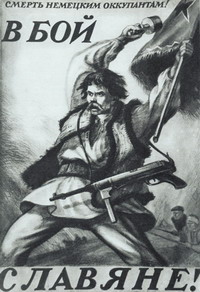 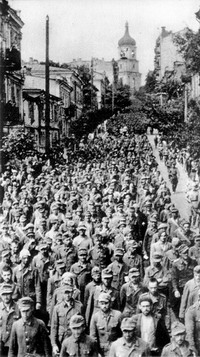 German prisoners are streets of Kyiv 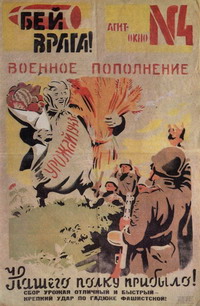 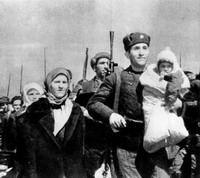 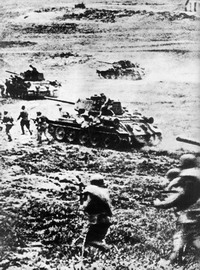