liberation of the territory of Soviet Ukraine in the border June 22, 1941 ended October 8, 1944, however its resettlement began long before this day.

yet in 1943 the evacuation of civilians began returning, under reconstruction and restoring the activity of the enterprise, especially in Eastern Ukraine. And the main efforts were directed to the field of heavy industry and energy. If the 1943 remained intact only 1 / 5 of industrial enterprises, the period to 1950 through the extraordinary tension forces and without bleeding war republic volume of industrial production reached pre-war levels and even exceeded it.

During the war, Ukraine lost about 9 million people. On average in each of the areas left 50 to 70% of the prewar population. Demographic situation even more complicated famine 1946 - 1947 years caused crop failures, negligent supervision and agriculture are traditionally a hard and defiant attitude of the communist regime to the peasantry. Famine gripped southern and eastern regions of Ukraine and cost more than 1 million lives.

After the war significantly changed the ethnic structure of Ukraine's population. In the republic no more Germans were completely destroyed and the Jewish population of post-war Jewish community of Ukraine consisted only of those who returned from evacuation. Instead, began to increase sharply the share of Russians. A lot of Russian workers have come to rebuild heavy industries Donbass, and then stayed there forever. Crimea suffered a hard shock. The joy of victory there for many turned into a tragedy no less than the German occupation. Taking advantage of war, the Soviet leadership finally release navazhylosya attractive peninsula of land from unwanted indigenous population. In May 1944, just from the Crimea was broken last Nazis, began large-scale operation of the forced deportation of Crimean Tatars and representatives of other nationalities: Greeks, Bulgarians and Armenians, only about 225 thousand people. On the land thus freed arrived immigrants the central regions of Russia.

ethnic situation in Western Ukraine are directly dependent on the settlement boundaries. By agreement of the leadership of the Soviet Union with the Government of Poland Restored border between the two countries had almost prolyahty "Curzon Line", the proposed line as the Polish-Ukrainian division back in December 1919, Poland finally abandoning the Western lands, receiving territorial compensation in the west by defeated Germany. Although Poland remained inhabited by Ukrainian Podlasie, Kholmshchyna Nadsyannya and Lemkivschyna. Finally, set the boundary line agreement of 16 August 1945. Relative to the border, 1941, the USSR refused to benefit from Poland's territory from cities Nadsyannya Lubaczow and Przemysl (Przemysl). When the Soviet-Polish agreement provided for exchange of populations: Poles in Western Ukraine were to move to Poland and from Ukrainian territory, which remained in Poland - to the USSR. In 1947 Ukraine will leaveuly over 800 thousand Poles. They moved mainly in the newly incorporated into Poland Silesia and Pomerania, where forcibly evicted nearly six million Germans. For example, the Polish community of the city is not completely moved to Wroclaw (Breslau German). In Ukraine, voluntarily, and often involuntarily, moved approximately 500 thousand Ukrainian.

Top 1947 in Poland Subcarpathian (Lemkivschyna) remained 150 thousand Ukrainian. Under no circumstances they did not want to leave ancestral land. Against this population was used the most severe measures. In the spring of 1947 the Polish and Soviet leadership was planned and implemented deportation Operation Wisla. County of residence was blocked Ukrainian Polish, Soviet and Czechoslovak troops, then Polish army units and state security forces began "stripping" areas. During the operation was suppressed desperate resistance detachments of the UPA, killing over 10 thousand civilians. The rest of the Ukrainian forcibly relocated away from the Soviet border - in Silesia, Pomerania, East Prussia. Last clarify the Soviet-Polish border took place in February 1951 The structure of the USSR became rich in coal deposits border area with cities and Belz Chervonohrad (Hrystynopil), while Poland won the Carpathian region verhorichchi Xiangin the town of Ustrzyki Dolne (Ustshyky-Dolne.) The consequence of large-scale deportations and population transfer was that the Ukrainian-Polish ethnic boundary actually coincided with the state border.

international recognition of the rights of the Soviet Union to Western Ukraine Ukrainian liberation movement has put in a very difficult situation. Further armed struggle became futile, and after death March 5, 1950 the commander of the UPA Roman Shukhevych insurgency boiled down to the actions of individual disparate guerrilla groups in the Carpathian foothills and the underground groups in cities. For some years, their activities extinguished.

In June 1945, the USSR became a member of Transcarpathia. In October 1944, the land was liberated from German-Hungarian troops. Formally Subcarpathian Rus was to return to Czechoslovakia, but there actually established Soviet military power administritsiyi. Finally Czechoslovak leadership had to come to terms with the loss of this territory.

the Soviet-Romanian agreement of February 10, 1947 among the two countries border installed, established in 1940 is Northern Bukovina and Bessarabia, South again went to the USSR as the Chernivtsi and Izmail region. Recommenced Moldavian SSR. Therefore, under the totalitarian regime most of the Ukrainian ethnolinguistic territory were collected within a single administrative-territorial formation - the Ukrainian Soviet Socialist Republic. However from the Ukrainian massif was forever torn his Western (Podlasie, Kholmshchyna Nadsyannya and Lemkivschyna) and Oriental (Eastern Sloboda, Kuban) margin.

Dnipro GES before the war. Zaporozhye

The ruins of the theater in Zaporozhye 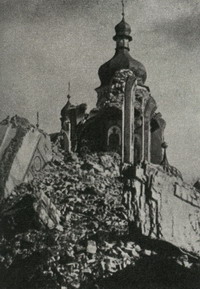 The destroyed factory "Bolshevik" in Kiev 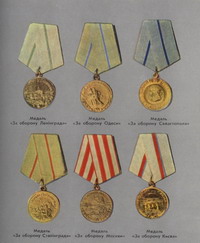 Medals, established in honor of the Hero Cities

The first products of the reconstructed plant Enakievskogo 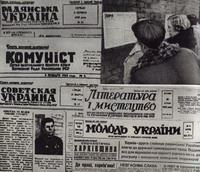 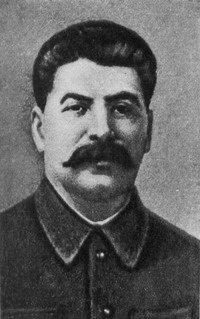 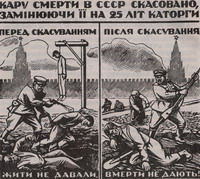 Group of warriors in the mountains of Slovakia. Autumn 1947 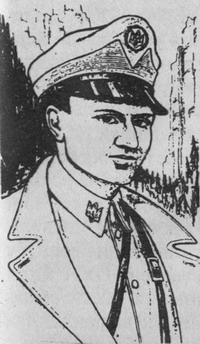 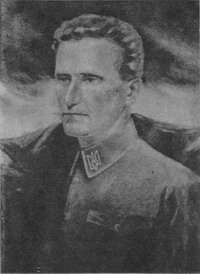