Bible or Scripture - books written by the Spirit of God sanctified by God through men called prophets and apostles. In the Bible God's revelation came to us accurately and consistently. Books written before Christ, united in the Old Testament, after Christmas - in the New Testament.

chronicle called historical literary work in which the most important events recorded in chronological order by year (in years) - "Summer in the summer," as said by that time.

Alipio Caves - Kyiv iconographer, a monk of Kiev-Pechersk Monastery. According to the Kiev-Pechersk Patericon of 1084 participated in the painting of the Assumption Cathedral in Kiev-Pechersk Lavra.

Anthony Caves - Kievan Rus church figure, one of the founders of Kiev-Pechersk Monastery. After returning he settled with Hilarion, the future metropolitan of Kyiv, near the summer residence of the dukes Berestova village on a hill overlooking the Dnieper (according to other data - in a cave dug Hilarion). At this point there was the Kiev-Pechersk monastery, whose founders are Anthony and Theodosius.

Agapit Caves - one of the first monks Caves, the most famous doctor XI. It is known that he was tonsured Antoniy. Prayer and healing herbs.

Hilarion - church leader and writer of 11 century. First Metropolitan of Rus' (from 1051). There was a priest at Brest, near Kyiv. Author church and theological work "Discourse Concerning Law and Grace", written between 1037 and 1050

Theodosius Caves - prominent church figure of Kievan Rus, abbot of the Kiev-Pechersk monastery, writer. 1055 was passed to Anthony Caves Monastery. Around 1062 a celibate priest, and later - Abbot Kiev-Pechersk Monastery. Theodosius began construction of the Assumption Cathedral and monastery cells. He took an active part in the political events that took place in Kiev in state 1060-70's, during the struggle between Kyiv table Yaroslavych.

1. The development of Ukrainian language

In the chronicle called 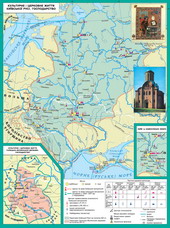 Inscription-graffiti on the walls of Saint Sophia Cathedral

ABC of the wall of St. Sophia Cathedral

Prayer "Our Father" with Ostromirov Gospel 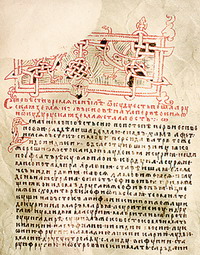 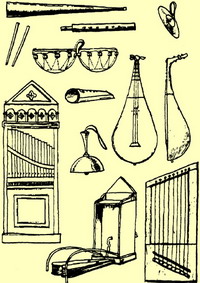 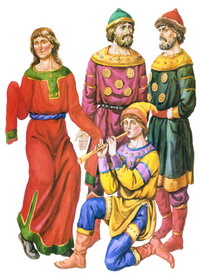