1. What victories were won by the Ukrainian army in1652? 2. What was the situation Hetmanate the end of 1653?3. What are the reasons for the tsar Hetmanate protectorate.

1.   Military Action1654-1655 biennium In January 1654, after reports of aPereyaslav events, the Commonwealth government was preparing for the new bigWar. Moscow State broke off diplomatic relations with the Commonwealth andentered the war with her on the side of Hetman.

У February1654 20000th Polish army invaded on skirts andBratslavshchina. Yes, the city was taken Nemyriv siege, but none of the residents inprisoners did not surrender and it was destroyed by the Poles. However, reaching the Bratslav andUman population because of the resistance and opposition forces Colonel CossackTomylenka and Ivan Bohun, the Poles were forced to retreat.

Meanwhile, the main military action unfolded on the territoryBelarus and Smolensk. Inc at the request of the king in May 1654sent there 18000th Cossack group, headed by acting hetman John Zolotarenko. As a result of successfulhostilities at the end of 1654 from the Polish-Lithuanian army wasreleased south of Belarus and all the Smolensk region.

Crimean Khanate regarded negatively to decisionsPereiaslav Council. Once inc ignored requests Islam-break the union with Muscovy, Tatars went to the union with the Poles. July 101654 between them was entered into "eternal contract", which involved mutualassistance "against any enemy." 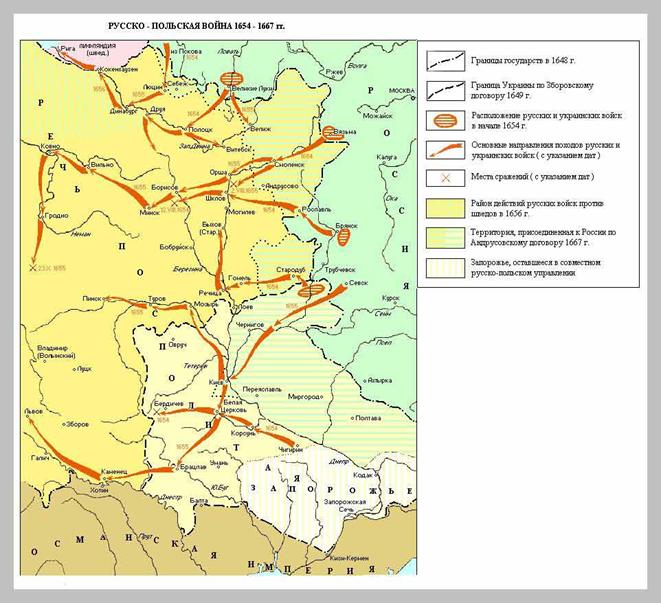 Heroic resistance superior forces of the enemy uslavylosyasmall town of Podolsk Bush. He defended some 6 thousand Cossacks, townspeople,Podolsk Robin and detachment insurgents Moldovans. During 18-20 NovemberBush defenders reflect the fierce storms Poles. When, after a bloody battlethey invaded the city, residents set fire to homes, destroying their property andcontinued to fight the enemy on the streets. Sensing defeat, they were infire, preferring death rather than prison. The wife of a localCossack officers met the Poles who surrounded her despised rampagethen raised the heat to a barrel of gunpowder. Some defenders of Bush, who defendedlock, with no power to resist the enemy, burned gunpowder cellar. Ofhuge explosion they were killed along with Polish troops, who had laid siegelock.

About 70 bushantsiv (mostly women and children) fled tocave. Once they found a clearing, they refused to surrender andshooting back to the last. None of them gave up and then ran into the clearingcave water flow, which flowed along and flooded the cave. It died lastbushantsi undefeated.

A decisive battle took place 19-21 January nearbyof Ohmatova. During the fiercebattle that took place among a field of frost in February, both sides were killed and 30thousand. None of the opponents failed to obtain benefits, but also had no powercontinue the military campaign. The attack of the Polish-Tatar army deep into Ukrainewas stopped.

Trying to destroy the Crimean-Polish alliance, hetmanTurkish Sultan said that to accept his protection. In responseMehmed IV ordered the Crimean Khan to refrain from attacks on Hetmanate.The situation is complicated by the Commonwealth. Ukrainian troops acting hetmanI. Zolotarenko captured Minsk and later with the Moscow regiments -Vilnius and Grodno. From the north of Poland moved Swedish king Charles X GustavThat claimed thePolish crown, and quickly took Warsaw and Cracow.

Khmelnytsky decided to use for a favorablesituation and release zpid Polish authorities in western lands, 19 SeptemberUkraine-Moscow army has besieged the Lions. She later captured YaroslavLublin, sycamore, Yaniv and other cities, coming in some places into the Vistula andXiang. However, it did not like the Swedish king, who was to requireKhmelnytsky city to lift the siege and retreat to the Hetman. BesidesHetman learned that Mengli-Gil, violating the prohibition of the Turkish sultan, togetherhorde invaded in Ukraine and moved to the city. In these circumstances, the endOctober Khmelnytskyi ordered to retreat. Before that, he met with AmbassadorPolish king and declared its readiness to make peace and to assist inagainst enemies. In exchange, he offered to give up Polesclaims to possess "all the Ruthenian principality 'and entering the recognitionhis western lands. Although, according to the hetman of the Polish gentry isnever agree, and the Cossacks should not fail from this condition.

Retreating, Ukraine, Moscow's forces were twiceattacked the Tartars, but successfully reflected. With this in mind, November 12, 1655 at Lake MehmedHirey concluded an agreement withKhmelnytsky on non-interference in the struggle of the Crimean Khanate and HetmanMuscovy with the Commonwealth, the restoration of Ukraine Tatar friendship and banTatars do attacks on Moscow and the Ukrainian land.

2.   Vilnatruce. Changing foreign policyKhmelnitskogo orientation. Contradictions that exacerbated between Moscow Statethrough the Baltic States and Sweden, led in May 1656 the war between them.Wage war on two fronts for the Moscow government was harsh, and heagreed to the proposal warworn Commonwealth conclude a ceasefire. In August-October 1656 held in VilniusMuscovite-Polish negotiations were concluded due to Vilna truce. By its terms,hostilities between Muscovy and the Commonwealth ceased. BothStates agreed that will lead joint military operations against Sweden andstart with her peace negotiations. Polish ambassador put forward a proposalTsar Alexei Mikhailovich elect to the throne after the death of the Commonwealth of JanKazimierz. The area defined under Hetman Bilotserkivskyicontract in the Kyiv province. If elected King King SpeechesCommonwealth Hetman remained in its stock.

Frank disregard Muscovite party interestsHetman Hetman was outraged and officers. In conclusion Truce of Vilnathey saw the violation of the Articles of March "1654 Khmelnitsky activatedefforts to conclude voyennopolitychnoho union with Sweden and Transylvania,directed against the Commonwealth and the Crimean Khanate.

У December1656 in the Hungarian city Randoti signed an agreement between the unionSweden and Transylvania. The distribution territory of the Commonwealth by its termsinvolved the conversion of Western Ukraine to Transylvania. Randotskyy contract showed thatTransylvanian prince and the Swedish king, in need of assistance Hetmanatewhile it would not strengthen at the expense of joining the Western Ukraine. 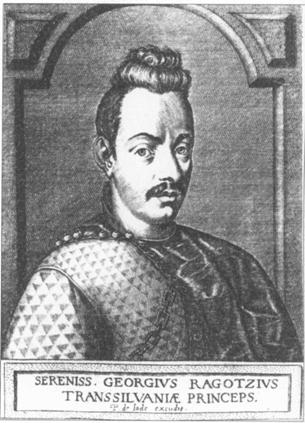 However, in mid-June the situation deteriorated allies.In Poland rozhortavsya broad liberation movement. After the attack on Sweden Carl of DenmarkX was forced to leave Poland. Polish troops invaded Transylvania andto Poland as an ally to come with a large horde of the Crimean khans. Panic-strickenDyerd II R

The Cossacks Zhdanovicha at this time the messenger arrived Moscowand warned that they fight without the agreement of the king. Moreover, among them the spreadrumors that inc seriously ill and die last days. Zhdanovich, consideringConfidence Cossacks, ordered to return home. Defeat Ukraine-Transylvaniantrip to Poland was a heavy blow to the patient hetman. 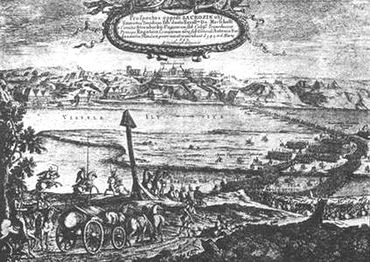 Hike the Cossacks under the leadership of A. Zhdanovicha

4.   Bohdan Khmelnytsky- Man, politician and military leader. July 27, 1657 in ChyhyrynBohdan Khmelnytsky died. Hetman was buried, as he has commanded in his native hamletSabbath in the Elias Church. 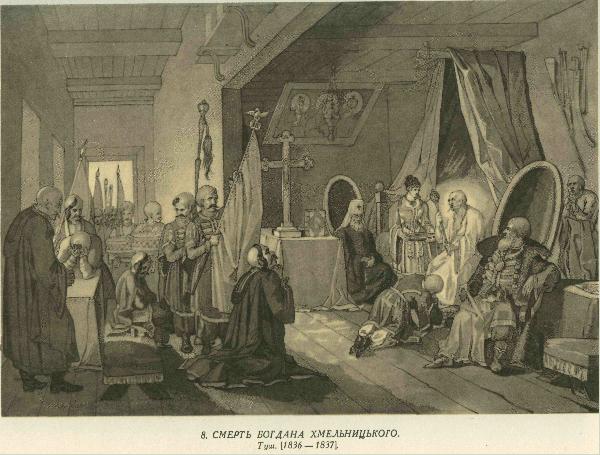 B. Khmelnitsky reasonably considered athe most prominent figures in Ukrainian history. It was only in the domestichistory of the national leader who could raise the whole nation to fightfor their release. Life way Khmelnytsky was closely intertwined withlives of many thousands of Ukrainian, full of brilliant victories and bitterlesions, deep thoughts and difficult decisions and personal lossesachievements.

Khmelnitsky led war NatsionalnovyzvolnuUkrainian people mid XVII. which was the culmination eventUkraine's history XVI-XVII centuries. He proved himself a brilliant military leadergenerated operationally, one of the best in Europe at that time the national army.

- Conclusion of the Polish-Moscow agreement VilenskyKhmelnytsky led to attempts to change the direction of foreign policy.

- The historic significance of B. Khmelnitsky, despiteadmitted his mistakes and miscalculations, it is difficult to overestimate.

1. What was the outcome of the Battle of Ohmatovym? 2. Thatincluded an agreement between Khmelnytsky and the Crimean khan, signed November 121655 under the lake? 3. What were the conditions of Vilna truce? 4. WhatRandotskyy States signed the contract? 5. A. Why Zhdanovich decided to discontinuetrip to Poland and go home? 6. Where was buried Khmelnitskogo?

7. Describe the course of hostilities in1654-1655 biennium 8. Why inc considered conclusion Vilna truceviolation of the Moscow State Ukraine-Moscow Agreement of 1654? 9. InWhat was the change in foreign policy orientation after KhmelnytskyVilna truce? 10. As the Ukrainian army raid took place in Poland in1657? 11. Describe the historical significance of Bogdan Khmelnitsky.

12. Track map of the course of hostilities in1654-1657 biennium 13. End of Table "Natsionalnovyzvolna warUkrainian people mid-XVII. "launched by material § 16.

14. Determine what were, in your opinion, achievements andKhmelnitskogo mistakes committed by him during the war NatsionalnovyzvolnoyiUkrainian people mid XVII. Explain your opinion.

1.         Foldlist the most important battles of the National Liberation War. Compare the consequencesand value.

2.         Whatsocial and political events of the National Liberation War you thinkmost important. Justify your choice.

4.         Whichimpact on the war and the development of the Ukrainian Cossack state wasActivity of Hetman Bohdan Khmelnytsky and his associates. Give the factsthat confirm your opinion.

2)         WhatUkrainian lands belonged to the Ukrainian Cossack state by ZborowskiBila Tserkva and treaties.

3)         Showdirections of the Ukrainian army military campaigns and major battles in spacedifferent stages of the war.

7.         Analyzechanges in political and socio-economic situation of the Ukrainian causedNational Liberation War.

1.         What eventconsidered the beginning of the National Liberation War?

9.         Whichsteps of the Catholic camp positive attitude toward fighting Ukrainianagainst the authority of the Commonwealth during the National Liberation War?

12.       When wasVilna truce signed in E Commonwealth and Muscovy?

Encyclopedia page on "The National War Ukrainianpeople of the middle XVII. Revival of the Ukrainian state "

September 18, 1651 - Conclusion of the contract Bilotserkivskyi

October 24, 1656 - Signing of the Moscow State andCommonwealth Truce of Vilna