core insurgent groups was the Cossacks, who belonged to a leading role in the management and flow of battle. In the ranks of the rebels were many peasants and townspeople, as well as immigrants from small Ukrainian Orthodox gentry. Supported the rebellion and the Orthodox clergy.

purpose of the National Liberation War was:

Jan Kazimierz II (1609-1672) - King of the Commonwealth (1648-1668). During his reign the Commonwealth sought to suppress the national liberation war, waged war against Muscovy and Sweden. In September 1668 abdicated. He died in Paris.

National War started in 1648 It was a memorable year for European history. It ended just when the Thirty Years' War and Peace of Westphalia was signed. In Sweden it captured the long stretch of almost all navigable rivers of North Germany, France - part of Alsace, the German princes were right to be recognized as independent rulers. Peace of Westphalia consolidated and strengthened the political fragmentation of Germany, led the international recognition of independence of Switzerland and the Netherlands. In England when the revolution began and the second civil war which ended in 1649 execution of King Charles Stewart. In France, the Fronde was - movement against absolutism. Muscovy HAD internal situation, the perturbed events sad times and the defeat of 1634 in Smolensk, which he has suffered from the Commonwealth. Turkey has remained strong, but became increasingly sensible internal crisis, an expression which, in particular, were dynastic upheavals. Pridunayskie principality and the Crimea in terms ofand vassal dependence on Turkey, the first requirement of the latter had put their troops. Powerful rebellion and war swept Spain, Italy, Portugal.

After the suppression of the Cossack rebellions of the first quarter of XVII century. increased the colonial policy of Poland to Ukraine, and has caused a national liberation war.

Therefore, measures that the Polish government was accompanied by his domination of the Ukrainian lands were intended to complete their conquest and subjugation, that were colonial. The colonial policy of the Government of the Commonwealth in the middle XVII century. brought the situation in Ukraine, causing a nationwide speech.

war of the Ukrainian people against the domination of the Commonwealth led by Bogdan Khmelnitsky .

He was born December 27, 1595 in a family of small Ukrainian nobleman Mikhail Khmelnitsky the family estate in the hamlet Saturday at Chyhyryn.

was in school at one of the monasteries in Kyiv and Lviv in the Jesuit College, so, on the one hand, received a traditional Ukrainian education, on the other - joined to the idea of European events. This combination ozbroyilo Khmelnytsky extensive knowledge of languages - book Ukrainian, Polish, Latin, and also promoted the formation of future hetman.

After returning from the city Khmelnytsky Chigirinskoy joined the hundreds of registered and already in 1620 its stock went into a campaign against the Turks in Moldavia. There, at the Battle of Tsetsorskyh fields captured.

was two years in Turkish captivity, where studied Turkish and Tatar languages. Freed from captivity and returned to service in the regiment Chigirinskogo.

Participated in the Smolensk War 1632-1634 he was an ally of Poland, in marine campaigns against Turkey, he was a Cossack rebellion of 1637-1638

We perform a variety of diplomatic assignments. Specifically, in December 1638 as part of the embassy, which was to achieve mitigation "ordinance ...", met with the Polish king. During 1646-1647 he was again met with the Polish king Ladislaus IV. The meetings discussed the right of participation in hostilities Cossacks against Poland, the Ottoman Empire.

As the facts, Bogdan Khmelnitsky even then preparing an uprising against Poland. To that end, he tried to use the Polish yard plans for war against Turkey, in particular sea trip Cossacks in the Polish army. About designs Khmelnytsky learned the Polish magnates, as evidenced by the events of the future hetman privacy. Disputes with Chigirinsky pidstarostoyu Daniel Chaplinsky through estate on Saturday, which he would select, Khmelnytsky led the summer in 1646 in Warsaw. It is known that King Bogdan received confirmation of their rights to Saturday. But this is not stopped Chaplinsky. In early 1647 he was beaten by the order of Khmelnytsky's son, and in the spring of that year Chaplinsky captured Saturday and expelling family Khmelnitsky. So Bogdan Khmelnitsky own experience convinced that the arbitrariness of the magnates and nobility in the Commonwealth has no limits, and no one but the Cossacks, not protect the rights of the offended people. So he and the nearestCompanions, we are actively preparing the uprising. The intentions were revealed, and in autumn 1647 Khmelnytsky arrested. In mid-December it with a small detachment of Cossacks and son went on Timosha Zaporozhye.

In early 1648 Bogdan Khmelnitsky, formed the first rebel group, established connection to the Cossacks of the garrison to Host January 25 and mastered it. He was elected hetman of the Zaporizhzhya Army. These events marked the beginning of the National Liberation War of the Ukrainian people .

With the support of Turkey, in February-March 1648 in Bakhchysarai Ukrainian ambassadors made a deal with the Crimean khan Islam-III for military assistance in the war against the Commonwealth.

START armed struggle against the Commonwealth

first battles of the National Liberation War. The rebels surrounded the Polish army under the command of Stefan Potocki on Yellow river water. The decisive attack on the Polish camp started on May 6. He ended with a defeat Poles.

Victory at Yellow Waters and Korsun become a signal for uprisings throughout Ukraine and the Ukrainian Liberation Army march westward. 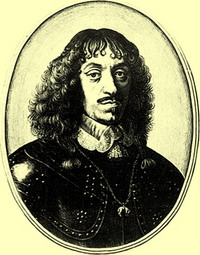 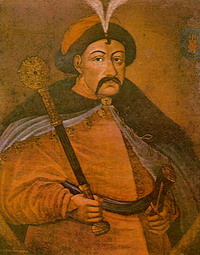 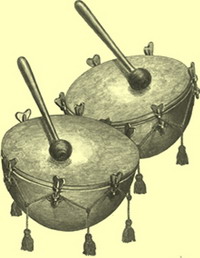 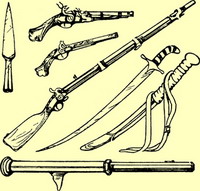 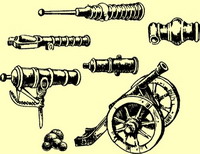 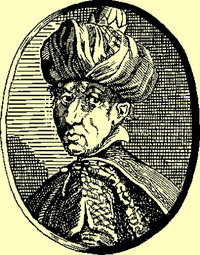 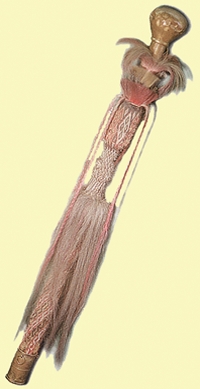 Attack of the Polish winged hussars