UKRAINE during the reign of Hetman Ivan Vigovsky

Nemyrych Yuri - outstanding statesman and political figure. He came from an old aristocratic family in Kiev and belonged to the wealthiest aristocrats of the Commonwealth. He received an excellent education, studying at the University of Leiden, Amsterdam, Oxford and Cambridge. Completing studies at the Sorbonne, in Paris, gave young Latin own work entitled "Exploration of Moskovytynsku war", which compared the political structure of Muscovy and the Commonwealth. On the other side of Bogdan Khmelnitsky Nemyrych passed in July 1657, a few weeks before his death hetman. After being elected as hetman Vyhovsky immediately became his assistant and advisor. Participated in preparation of documents Hadiach contract. According to the treaty was to take place Chancellor Grand Duchy of Rus.

John Vyhovsky came from an ancient family of the Ukrainian Orthodox gentry. Education acquired in the Kyiv Mohyla Academy. He knew several languages, including Latin. National War broke out on the Polish side Vyhovsky - he was captain kvartsyanoho troops. During the battle came to Zhovtovods'ka Tatar captivity. Three escaped, three were caught Horde and it probably would be executed, if not Bohdan Khmelnytsky, who bought Vyhovsky free. Soon the war became general secretary and close associate of Khmelnitsky. He was carring Registry 1649, co-author of numerous proclamations and letters hetman. In 1648 Vyhovsky built administrative and diplomatic headquarters Khmelnytsky original Ministry of Foreign and Internal Affairs - General Military Chancellery. Chairing it until the death of Hetman, general clerk was unchanged in utayemnychenyy most secret affairs. As one contemporary wrote, "... no colonel did not know that thought Inc - one only Vyhovsky .". Vyhovsky was more flexible than Khmelnitsky, and this created additional opportunities for diplomatic combinations.

internal situation of the Ukrainian state after the death of Khmelnytsky mainly stems from external factors.

They included looking at that

1) in major Ukrainian cities have to stand with an army of the king's magistrates, they should refrain from the local population, 2) taxes on rental income and mills have come to the royal treasury, and 3) the number of registered Cossacks should be reduced to 10 - 40 thousand people., 4) continue to be nominated Hetman coordinate with the king, 5) elected metropolitan of Kiev must be sent to the dedication of the Moscow Patriarch, etc..

On the domestic situation of the Ukrainian State and Affected long war.

yet for the life of Bogdan Khmelnitsky, 5-11 April 1657, officers' council made a decision on the transfer of power after the death of Hetman his 16-year-old son George.

Implementation of the decisions in life would mean the introduction of the Hetman's power succession, ie the establishment in Ukraine of the monarchical form of government.

Hetman After the suppression of rebellion

double game in Moscow, which for its own interests provoked uproar Pushkar, Moscow government has demonstrated the desire to conquer the Ukraine.

Vyhovsky again think about finding another ally. After much hesitation he decided to turn to the Commonwealth.

Gadyach September 6, 1658 Hetman between Ukraine and Poland have signed an agreement titled the Hadiach.

Hadiach contract was more deliberate and precise than the treaty of 1654 and, unfortunately, was never to realize, moreover, that Poland was not going to comply with its terms.

Ukraine during the reign of Ivan Vyhovsky 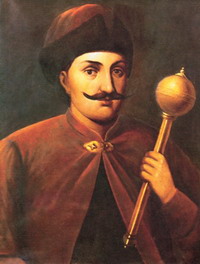