CULTURAL DEVELOPMENT OF UKRAINE IN THE SECOND HALF XVII - first half of XVIII century.

Lazarus Baranovych (c. 1620-1693) - famous Ukrainian church, educational, political activist. He studied and later taught at the Kyiv Mohyla Academy, in 1650-1657 he was - its rector. In 1657 the Archbishop of Chernigov and Acting Metropolitan of Kiev. Supporters of independence of the Ukrainian Orthodox Church of Moscow Patriarch.

Daniel Tuptalo (Dimitri Rostov, 1651-1709) - Ukrainian writer encyclopedist and church and educational leader. Born in Kiev region in a family of Cossack captain. Ordained in 1669 under the name of Demetrius, from 1679 - Abbot of monasteries in Ukraine.; From 1702 - the Metropolitan of Rostov. Canonized.

Feofan Prokopovich (1681-1736) - Ukrainian scientist encyclopedist, public and church figure. He left a rich and diverse scientific and literary heritage. He wrote poems in Latin, Polish, Ukrainian, historical works, sermons, philosophical and political treatises, textbooks and more. Education Feofan Prokopovich won in Kiev (graduated Kyiv Mohyla Academy) in Rome. Professor, later rector of the Kyiv Mohyla Academy. But had to leave Ukraine: in 1716 by order of the king went to St. Petersburg. He became one of the closest advisers to the king on church reform (helped eliminate a patriarch and a synod under the control of the king) and public policy. Since 1718 - the bishop of Pskov, in 1721 - Vice-President of the Synod (President - S. Jaworski), from 1724 - Archbishop of Novgorod.

Stefan Jaworski (1658-1722) - famous Ukrainian church statesman, philosopher, writer. He studied at the Kyiv Mohyla College, in Lvov, Lublin, Poznan and free. By order of Peter Jaworski moved to Russia where he became metropolitan of Ryazan and Muroms'kyi and then Exarch and blyustytelem nationwide patriarchal throne. In 1721 was president of the Synod and the protector of Slavic-Greek-Latin Academy.

Samiylo Velichko (1670-1728) - Ukrainian chronicler. He studied at Kyiv Mohyla Academy. Served as clerk in Basil Kochubey, and in 1705-1708 he was - in the General Registry. In late 1708 came to prison at the time of repression against supporters of Peter I. Mazepa. After his release in 1715 he settled in the village. Zhukah in Poltava region, where during 1715-1720 he had written a detailed piece on the history of Ukraine 1648-1700 biennium

John Schyrskyy (? - 1714) - famous Ukrainian painter and engraver. Until 1683 worked in Vilnius, later - in Chernigov and Kiev. In Liubech in Chernihiv restored monastery of St. Antony's Cave (from 1697 - Archimandrite of the monastery), built in 1711 with the support of the church of St. Ivan Mazepa Onuphrius. In 1707-1709 he taught poetics in Chernihiv College.

development of Ukrainian culture in the second half of XVII - XVIII century the first half. occurred at very complex, sometimes contradictory terms.

phenomenon most famous historical literature of the first half of XVIII century. were Cossack chronicles.

oldest among large Cossack chronicles. It describes events from 1648 to 1702 piece written in Ukrainian, close to the popular (probably 1702). Distributed in the lists.

sources were various documents, books and records, the testimony of eyewitnesses and contemporary events.

favor of the Liberation War, provides a textbook picture of the causes, though not inclined to idealize the war and its leaders. Saw no perceived union Khmelnitskogo of Islam-III, was depressed victims of severe and desolate ruins of Ukraine dated. Much emphasis and Zaporozhye Cossacks, especially I. sulfur, but his attitude toward the Cossacks are restrained.

Established in 1710 Gadyach second among large Cossack chronicles. Written in Church Slavonic language. Of the events from ancient times to 1709 - Ivan Mazepa's defeat and the election of Ivan Skoropadskyi. Main attention is paid to the course of the National Liberation War led by Bohdan Khmelnytsky. Author, creating a record, prostudiyuvav large number of documents and various historical works of his contemporaries and predecessors, relied also on folk stories. Perhaps this explains the popularity of extreme Hrab'yankovoyi books, as evidenced by the dozens of lists, in which, in fact, be distributed record.

Wieliczka is the most prominent phenomenon of the Cossack chronicles. It chronicles - book Ukrainian. Chronicle consisted of two parts: the description of events from 1648 to 1660 and from 1660 to 1700 came to us damaged, and no end of gaps, especially in the first part. Manuscript Samiylo Wieliczka accompanied by ten portraits hetmans contains many documents poetic texts.

word "Baroque" from the Italian language means bizarre, weird . It is called artistic style that prevailed in Europe from the late XVI and almost to the end of XVIII century.

For Baroque art is characterized by extreme attention to the form. In the literature, this feature has appeared in a variety of genres - even to such verbal exercises, as figured poems and pyshnomovnosti: and in the construction of complex sentences wordy, and applying fancy unexpected comparisons, the accumulation of images, coupled with ancient biblical mythology and more. In the XVII century. baroque was even writing a letter (telling in this respect are the signatures of Ukrainian Hetman and clerk). Baroque buildings are typical accumulation luxurious decorations, highlighted by decorative, grandiosity. On the Ukrainian lands Baroque style was most vividly in the works of architects J. Schadel, S. Kovnir, I.Hryhorovycha-Barsky, B. Rastrelli, B. Meretin, painters Kondzelevicha J., I. Rutkovych, sculptor I. Pinsel, the music of Baroque art represented by names such as M. Berezovsky, Bortnyanskyi, A. Wedel, in literature - Velichkovskyj G. Hornbeam Kostyanko, S. Velichko.

Development of Culture of Ukraine in the second half of XVII - the first half of XVIII century. 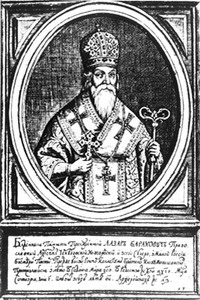 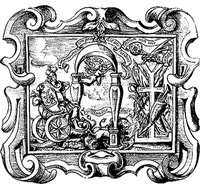 Engraving by I. secular books to S. Jaworski, depicting Hetman Ivan Mazepa on the arms. 1689 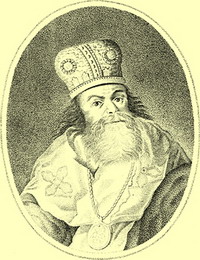 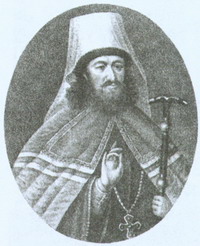 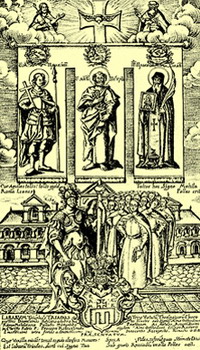 I. Engraving depicting secular students of Kyiv Mohyla Academy and its main building 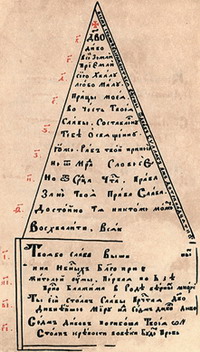 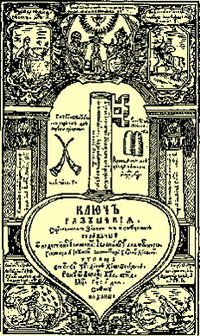 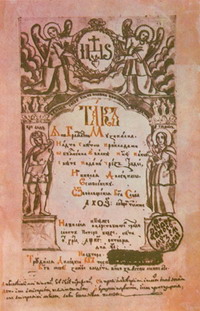 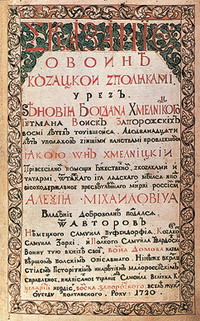 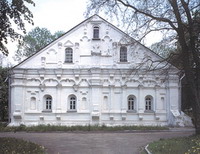 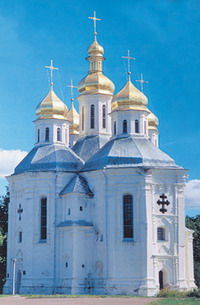 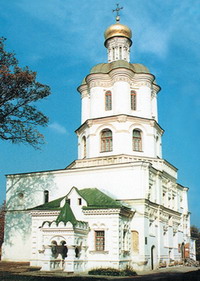 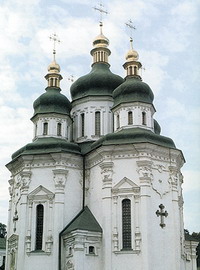 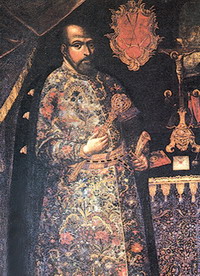 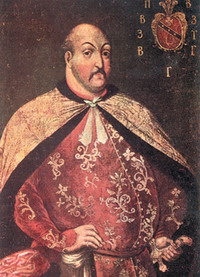 Portrait of the famous Ukrainian politician and military leader of the second half of XVIII century. Gregory Gamaliya 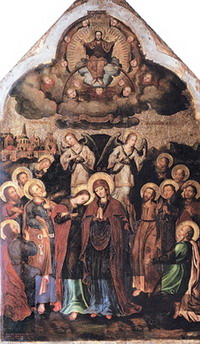 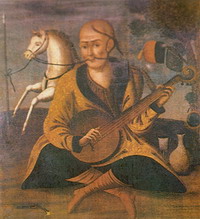 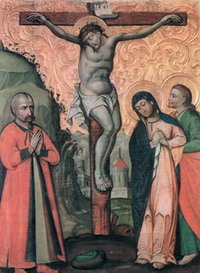 Icon of the Crucifixion with a portrait of Colonel Lubensky Leontius Candles. XVII. 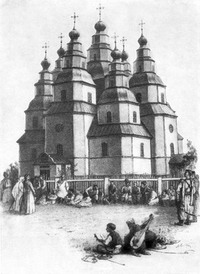 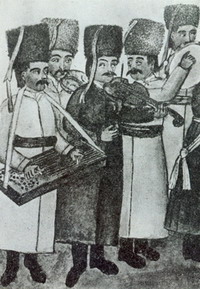