§ 2. Union of Lublin and its impact on development of Ukrainian lands (textbook)

§ 2. Union of Lublin and its influence on the UkrainianLand

1.   PrerequisitesUnion of Lublin. 60-ies XVI century. became the period of major changeto Ukrainian lands. They were associated with the merger of the Polish Kingdomand Grand Duchy of Lithuania into a single polity.

What were the prerequisites for the community? In this time of greatDuchy of Lithuania is very relaxed. Lithuania defeated in the Muscovite-Lithuanianwars of the late XV - the first half of XVI century. and lost much of itsterritory. From 1561 Lithuania participated in the Livonian War againstMoscow State. As a result defeats the Lithuanian side found itself in a statedeep crisis and tried to get military aid from Poland. For its part,Polish kingdom hoping to use the weakening of Lithuania toimplement its plans on promoting the Slavic East.

The idea of union of Lithuania and Poland had supporters in bothstates, but differed in content. Lithuanian magnates, who were dominantsituation in the country, were supporters of independence and agreed toassociation "between two equal" with a separate provision of the Diet and itsprivileged position in the state. Instead, middle and petty nobility,dissatisfied with the rule of the duchy magnates hoped that the resultmerger, it will gain the same privileges that enjoyed in their own countryPolish nobility.

Polish magnates and gentry in general supported the ideaunification of both states. They saw in it an opportunity to acquire new land anddependent peasants. This idea guided the Polish side of the ancientAccessories Ukrainian lands to Poland, from which they seem to have beendetached, and rejecting the offers of the Lithuanian magnates, advocated the inclusionLithuania into Poland.

Ukrainian nobility also had their position. He was inpositively relates to the whole union of Lithuania and Poland, hoping that thiswill reliably protect the southern borders of the Turkish-Tatar attacks andinvasions noble ends (armed attacks) in the Polish-Ukrainianborder. Combining the two states also meet the economic interests of the Ukrainiangentry, as passed through Poland trade routes to WesternEurope. These Ukrainian princes put forward a proposal to merge Poland, Lithuaniaand Ukraine in one state on equal terms, insisting on preserving freedomreligious and cultural practices. Ukrainian small and middle nobility, nothad such privileges as princes and magnates, speaking for the association hopedprimarily to obtain equal rights with the tip of the magnate and gain influencecourse in the state. 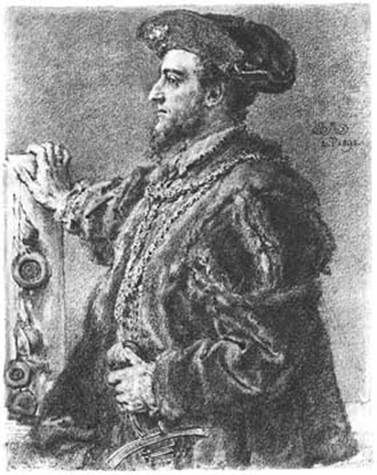 2.   LublinDiet 1569 To address the question of the Polish Association of the Kingdomand the Grand Duchy of Lithuania in the Polish town In Lublin1659 joint meeting of representatives of the privileged position of the Dietboth countries. Sharp disagreement over the forms of association there were half a year. Lithuanianparty advocated the establishment federalStateAnd polish - for incorporation (inclusion) Lithuania into Poland.

Satisfied that the Polish side is not going to consideron its proposals, the Lithuanian delegation left the Diet, to disrupt his work. Inreply to this Polish Senate urged to prepare for war with Lithuania and demandedKing Sigismund II Augustus approve the inclusion of PolandVolyn and Podlasie. Announcing the accession of these lands, the Polish kingdemanded that the nobility, who had estates there, come to Lublin and swearPoland, threatening those who do not, the confiscation of possessions. LaterKing issued the privilege of return under its authority Bratslavshchina and Kyiv regionarguing that "all the Rus land since time immemorial, from our ancestorsPolish kings, was joined together with the first part before the Polishcrown.

Lithuanian delegation was forced to surrender to the Polishparty, return to the Diet and to agree to withdraw from their country ofreferred to Ukrainian lands. 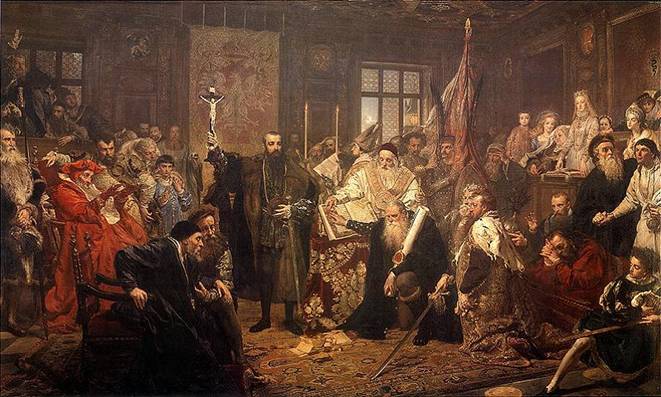 Polish Kingdom and Grand DuchyLithuania, by the previous incorporation between them, are bothpeople above one nerozriznyuvane, indivisible body (in which) toperpetuity one head, not separate sovereigns, and one - the Polish king, who,according to ancient custom and privilege, joint Lithuanian and Polish voices willelected in Poland ... As for the election, putting it on the table the Grand DuchyLithuania, it has to stop ...

Main Diet should always be one but notindividual, in addition, there should be one never separated the Senate in all mattersand needs ...

Coin must be monotonous and equal toweight and sample ... As in Poland and Lithuania should be destroyed all tradingduties and adjustments ... Now and in perpetuity should not take any fees from the spiritual andlay people and the noble title of their subjects ...

1. He led the Commonwealth? 2. What are the benefitsreceived nobility of the merger? 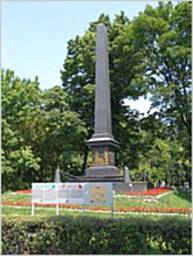 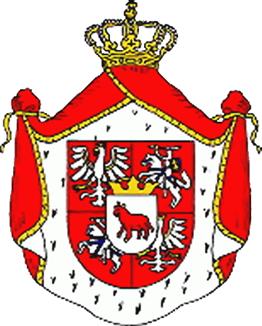 King of the Commonwealth jointly elected to the Sejmand Lithuanian gentry. Poland and Lithuania kept separate legislation, judicialsystem, the central and territorial governments, army and finances. However, in Lithuaniaown diet have been eliminated, and it lost its right to a separate externalrelations with other states.

3.   Socio-politicalchanges in the Ukrainian lands after the Union of Lublin. OnUkrainian lands, which due to the Union of Lublin passed to Poland wasintroduced administrative and Polish System. They dividedin the province, led by government appointed rulers. Province dividedin counties where the administrative and judicial authority appointed by the king focused onstewards. In the provinces and counties to address local issues, electionDeputies on a national abundant (overall) periodically convened Dietdietines nobility.

Administrative andstructure of Ukrainian lands in the Commonwealth

It was a system formed the aristocratic courts. Inhrodskyh courts of civil and criminal cases are considered old age. Inchamberlain court judge pidkomoriy resolved disputes related to separationnoble possessions. Zemskov courts composed of judges and officers and pidsudkaelected at dietine gentry. They were temporarily during dietines andconsidered cases of the local gentry.

For Ukraine, the Union of Lublin was both positive andnegative consequences. Yes, most Ukrainian lands were united withinone state, which contributed to the development of Ukrainian natsionalnokulturnomupeople. In connected to the Kingdom of Poland Ukrainian lands weresaved by the norms of justice Lithuanian statute, the existing administrativesystem of record keeping and Ruthenian. Representatives of Ukrainian princes andgentry received the exclusive right to occupy positions in local administrationregardless of religion. With the Lublin Union of Ukrainian landszaluchylysya to new forms of social life: aristocratic democracy, localgovernment, judiciary, etc. birth. Through Poland to Ukrainian landsspread to western European cultural influences, increased number of traininginstitutions.

However, the need to participate in dietines,Ted Diet, communication with the Polish government and causing polonizationdenationalization of the Ukrainian gentry. This led to the loss of Ukrainiansociety of its elite. For Ukrainian peasants and townspeople increased duties andtaxes. Union of Lublin was opened before the Polish kingdom to usenatural resources of the Ukrainian lands to increase their economic andmilitary power and confer estates on novopryyednanyh Territoriesrepresentatives of the Polish gentry. The emergence of Ukrainian lands in possessionPolish magnates led to enslavement of the peasantry and a significant strengthening of itsexploitation. However, the vast majority of Ukrainian population became increasinglymore subjected to harassment because of natsionalnorelihiynyh polonization andcatholization. Not true also estimates that the new Ukrainian stateland will be protected from the Turkish-Tatar attacks and noble end collisions.

- In the 60's XVI century. formed conditionsto join the Polish Kingdom and Grand Duchy of Lithuania into a singlestate. However, the vision of the future form and content in his state associationparticipants differed significantly.

- Because Union of Lublin on the map of Europea new state - Rzeczpospolita.

- Most of the Ukrainian lands in the Lublin Union,came under Polish rule, which caused many changes in their situation.

1. With which the state fought Grand Duchy of Lithuania with1561? 2. What was the position of the Ukrainian princes on the possible associationPoland and Lithuania? 3. What is a federal state? 4. When it was concludedLublin union? 5. What are the Ukrainian lands in the Lublin Union, came underPolish power? 6. Name the province, formed Polish to Ukrainianlands.

7. What were the preconditions Union of Lublin? 8.Identify the basic differences in the position of Polish, Lithuanian and Ukrainianparties on the merger of Poland and Lithuania. 9. As the Union of Lublin was signed?10. Describe the structure administratyvnopolitychnyy Ukrainian lands inpart of the Commonwealth.

11. Identify by name and card centers voivodshipscreated by the Polish authorities in the Ukrainian lands, obtained Lublinunion. 12. Make a table of "the consequences of the Union of Lublin to Ukrainian lands.

13. Polish King Sigismund II Augustus issued in JuneJune 1569 privilege of returning to the Kiev region of Polandstressed: "Kyiv was and remains chairman and chief town of Rus Land, andRuska all land since time immemorial, our ancestors from the Polish king,was joined together with other first part (Podlasie, Volhynia andBratslavshchina - auth.) To the Polish crown. Do you share the point expressedview? Give facts that confirm your opinion.